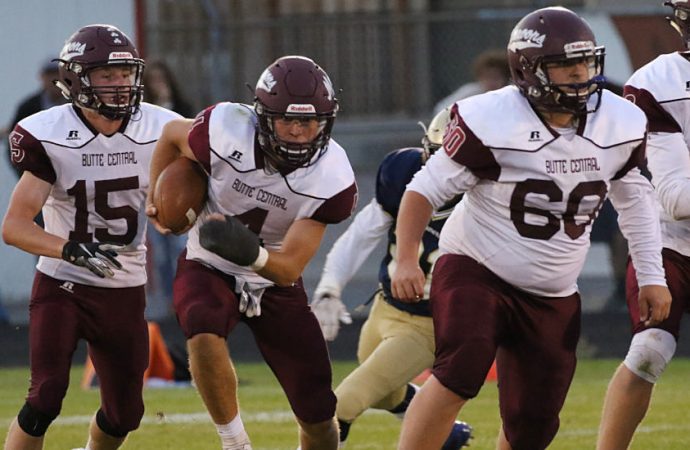 Celebrations are lining up on the docket for Butte Central’s home high school football game on Friday night.

The Maroons will take on Corvallis at 7 p.m. in a Western A Conference clash at Bob Green Field on the Montana Tech campus. (Radio: KOPR, 94.1 FM or online)

It will be both the BC homecoming game and a heritage night. Butte Central will be honoring members of the 1969 Maroons’ state Class A championship football team in recognitions prior to kickoff. The ’69 team’s title is the subject of a party, dinner and other gatherings remembering the 50th anniversary of the achievement.

The 2019 Maroons will be looking to end some tough times brought on by injuries and having to navigate, perhaps, a tougher route than the Ice Road Truckers. BC is 0-3 in a season in which all games count as conference tilts. The losses have been at the hands to top-ranked Hamilton, third-ranked Frenchtown and not-quite-ranked Dillon, according to this week’s edition of the Treasure State Media Poll. Dillon is just out of Class A’s top five with an overtime loss to Frenchtown the first week of the season.

Corvallis comes in at 1-2 with a 14-13 win over Stevensville that began the season followed by blowout losses to Hamilton and Frenchtown.

“It’s Homecoming Week and we’re excited to come home after three tough games that included two road games the last two weeks,” Butte Central head coach Don Peoples Jr. said. “Corvallis is a solid football team. They run an unorthodox offense, out of the pistol. It’s option football and it has been difficult for everyone to stop. They moved the ball well against Frenchtown and Hamilton.

Head coach Clayton Curley lost some valuable skill players to graduation since last fall, but seems to have his program well-installed.

The quarterback is 5-9, 140-pound senior Jaymark Liedle, who inherited the job from his older brother, Llaing, a deft QB in the Corvallis offense as a three-year starter.

“The quarterback is like a clone of the last starter, his brother,” Peoples said. “He looks just like him on film — smaller guy, but quick and dangerous.

“(The Blue Devils) were very talented last year and played a lot of kids last year. So, they have a lot of kids with experience. The cupboard was not left bare coming into this year.”

The last meeting of the teams is one the Maroons have on their minds, Peoples said. BC’s last game of 2018 saw the Blue Devils outscore Butte Central 52-32 for the Western A’s last berth in the state playoffs.

“We moved the ball on them last year and scored five touchdowns,” Peoples said. “We just didn’t do a good job of stopping them. Our offense has to find come consistency and our defense has to find a way to stop them.”

Senior Thomas McGree will again be quarterbacking the Maroons and doing so with a broken left hand. He has played well. The Maroons, however, will be without two more seniors — Jared Simkins and Braden Harrington, both of whom are in concussion protocol. Simkins was hurt in the season opener and Harrington was injured last week. Sophomore Joseph Sehulster has been out with a sprained ankle and sophomore Gunnar Yelenich was lost this week to a broken ankle suffered in a subvarsity game Monday.

Both have been good special teams contributors, and varsity backups.

On defense, Matt Simkins, Richards and Williams remain in the upfront rotation, joined recently by Driscoll and Hart. Holland, Lester and Ossello are at linebacker spots with Heaphy and Neumann at the corners, Lakkala at strong safety and McGree at free safety.

Senior David McGree is the kicker.

“I think we played three outstanding teams and, hopefully, they brought us up to another level,” Peoples said. “We’re hoping to use that experience to find a win.”