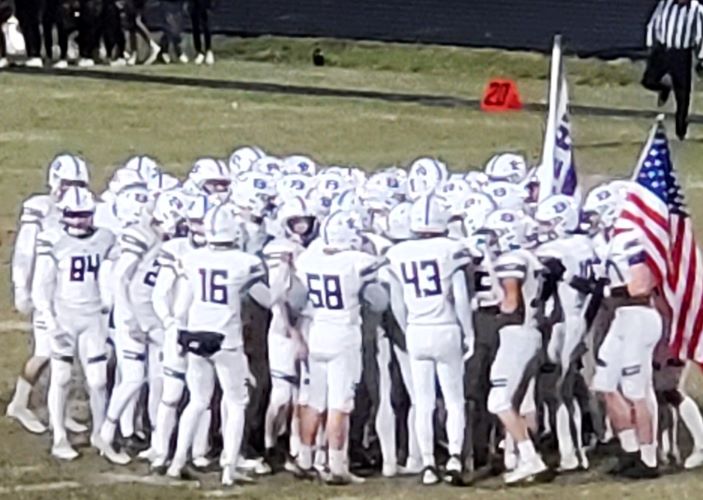 HELENA – Butte High had Class AA championship favorite on the ropes Friday night, but the Bulldogs could not deliver the knockout.

Capital needed three fourth-quarter touchdowns to get away from the Bulldogs. The Bulldogs had been, well, dogged. They led early, fell behind and then rallied to tie Capital, and missed on three good scoring chances before succumbing to the Bruins.

In light rain, a slight breeze, temperatures in the 40s and full-house crowd, Capital didn’t get away without knowing it had been in a heck of a football game.

“I am so proud of our kids,” Butte high head coach Arie Grey said. “They just kept battling and competing. I’m really proud of our senior group of young men. I am excited to see what they will do in the future.”

“We gave ourselves opportunities to win tonight and that’s all you can ask for.”

It was a credit to clutch defense by Capital, too, to keep the Bulldogs out of the end zone on all but two cracks at it. Penalties killed an early opportunity for Butte High and the Bulldogs later suffered a pass interception in the end zone and a lost fumble at the goal line.

All night long, until the closing minutes, the Bulldogs looked about to avenge the 41-0 licking they absorbed at the hands of the Bruins earlier in the season.

The teams played to a scoreless tie in the first quarter before the Bulldogs gained a 7-0 edge by halftime. With 4 minutes, 41 seconds left in the first half, quarterback Jace Stenson speared receiver Cameron Gurnsey in the end zone with a 19-yard armor piercer. Tyler Duffy added the extra point. The touchdown capped a 54-yard drive helped by a 17-yard pass to Tocher Lee from Stenson.

Just before intermission, Butte High drove to the Capital 10-yard line after Ethan Cunningham picked off a pass for the Bulldogs in Bruin territory. Stenson’s floater into the end zone was pulled down by Capital’s Tycen Mooney. The Bruins clicked off four plays, including a 28-yard dash by speedster Tom Carter, before going to the locker room.

Butte High’s first possession in the second half ended in a fourth-down sack and Capital took over the ball at its own 34-yard line. Joey Michelotti passes to Hayden Opitz and Carter netted the Bruins 34 yards on their drive, which was finished by Michelotti’s 6-yard TD flip to Opitz. The score-tying touchdown came with 5:57 left in the third quarter.

The score stayed tied through the period. Capital broke it with an 11-yard zip by Carter at 8:59 of the fourth quarter and the Bruins seemed on their way to cinching the victory.

Butte High didn’t cave. The Bulldogs argued back with a 38-yard scoring pass from Stenson to a lunging Gurnsey. The receiver dove across the goal line making the catch and the score was tied, 14-all, with 8:22 still on the clock.

Capital fumbled away its next possession and Jonas Sherman recovered for the Bulldogs on the Bruins’ 22-yard line. After two runs by Trey Hansen and netted nine yards, Butte High was interrupted by a false start mark-off. Stenson threw a sideline pass to Hudson Luedtke, who made a diving, tumbling catch to set Butte High up on the Capital 3-yard line.

However, the power carry by lineman Zach Tierney inserted into the backfield came apart in the handoff with pile moving toward the goal line. Opitz came up with the recovery for Capital and the Bruins had survived the threat.

After an incompletion, Capital quarterback Hudsen Grovom completed passes to Carter for 14 yards and Nick Michelotti for 24, setting up Carter for a 59-yard dart to the end zone. The run tallied the go-ahead touchdown, the Bruins were leading 21-14 with 5:15 on the clock.

The Bulldogs were pinned deep in their own territory and had to punt away their next possession. Capital took over possession and Carter burned 34 yards of turf to the Butte High 21-yard line on first down. The Bruins stayed on the ground and the tight end, Opitz, borrowed space in the backfield for a fullback carry of five yards four plays later. The run scored the clinching touchdown, opening the difference to 28-14 with only 2:51 left in the game.

“This was a little bit different than it was the first time we played them,” Grey said, referring to the 41-0 defeat. “I’m proud of the way we played tonight. The guys competed and they came up with big plays. But, Capital did, too. They made a few more than we did.”

“We went up-tempo,” the coach said. “Our energy tonight was unbelievable and I think it gave us a chance to move the ball better.”

Stenson wound up passing for 215 yards and running for 54. Gurnsey led the Bulldogs in receiving with 74 yards on three catches, including the two touchdowns. Seven different receivers caught passes for Butte High. Luedtke had four grabs, and Lee and Cayde Stajcar each had three receptions.

Kale McDonald intercepted a pass for the Bulldogs.

The loss ended the season for Butte High, which finished with a 5-6 record.

Capital takes an 11-0 mark into a home game against two-time defending state champion Missoula Sentinel in the semifinals next Friday.