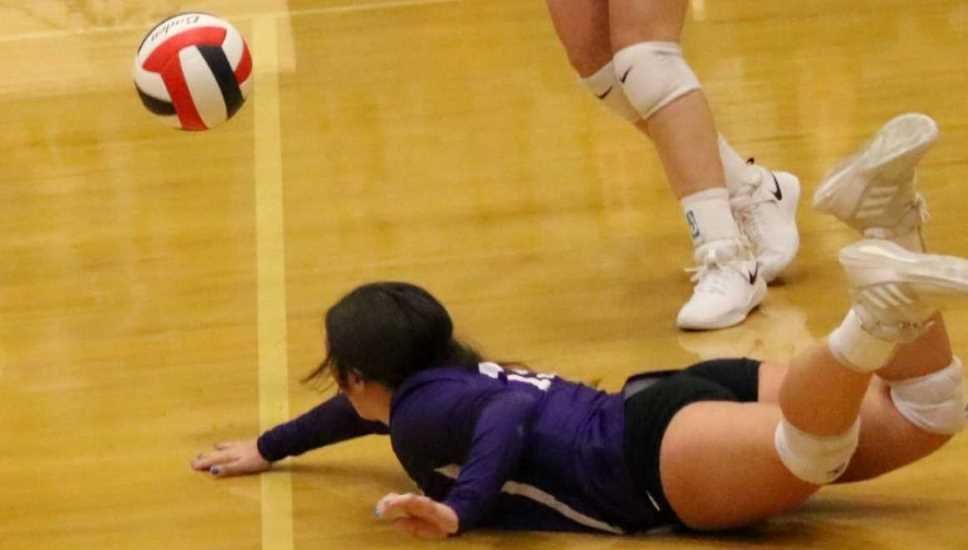 Class AA conference volleyball had the fans on their feet the whole night at Ross J Richardson Memorial Gym as the Butte High Bulldogs hosted the Bruins of Helena Capital on Senior night in front of a Halloween-clad student section.  Senior players and managers from both squads were honored before the match.

What started out looking like a sweep by the Bulldogs, ended very differently as the Bulldogs fell in the last three sets to the Bruins 3-2

The Bulldogs played some of their best ball in the first two sets of the match but the Bruins came back with force on the front line to crush the Bulldogs’ hopes of a senior-night win.

Set one was competitive on both sides of the net with the first tie occurring at 6-6.  A long rally back and forth had the Bulldogs taking their first lead at 7-6. A couple plays later, #13 Camille Kautzman hammered a kill from the back row to push the Bulldogs ahead 9-7.  The momentum was on the purple side of the court and the Bruins called a time out at 11-7 to break the scoring streak.  Middle hitter, Averie Olsen, was on fire on the front line as she forced blocked shots and pounded kills at ease.  Setter, Jaycee Cleveland, was placing her sets with precision which improved the hitting by all her teammates.  Butte took the first set 25-22

Set two continued with Bulldog momentum with a spread offense having kills being delivered by many of the Bulldog hitters.  Defensive specialist, Camille Kautzman displayed some amazing digs in the backrow as she scrambled to stop all balls from hitting the floor.  Her one-handed pancake saves kept the fans cheering.  The Bulldogs won the set 25-18.

Then the tides changed and the Bruins came back showing their true power and finesse at the net.  Nyeala Herndon slammed 5 jump serves to end the first set in favor of the Bruins 25-21.  The fourth set was a fight back and forth as neither team was ready to bow to the other.  The point spread was never more that 3 points and the lead changed many times causing the screaming fans to go wild with anticipation of a win.  The Bruins prevailed 29-27.

The Bulldogs’ next matchup is Saturday in Helena taking on Helena High in the final regular season match.