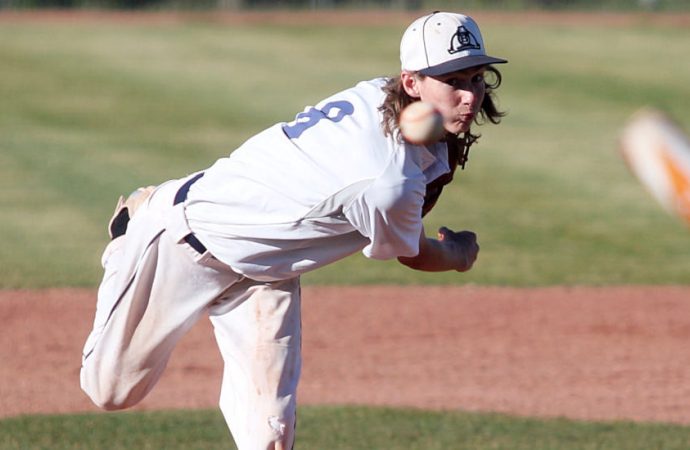 Butte Miners relief pitcher Liam Sommer delivers a pitch in the seventh inning in Game 1 of a doubleheader with the Billings Scarlets July 2, 2018 at 3 Legends Stadium. (Butte Sports file photo)

This summer, Butte’s Liam Sommer is chasing around addresses in the Mining City delivering pizzas for Domino’s Pizza.

Sommer is working to get ready to report to the University of Mary, where he will pitch for the Marauders during the 2019-20 school year. He signed a letter of intent about a week and a half ago to join the NCAA Division II program in Bismarck, North Dakota.

“This is something big, so I might as well take,” Sommer said of the opportunity to sign with Mary. “I feel this is a good step for me. I’m really excited to go.”

The move comes after just one season pitching for Lake Region State College, a two-year junior college in Devils Lake, North Dakota. It comes because of the successful freshman campaign by Sommer, a 2018 Butte High graduate and former Butte Miner and Butte Mucker.

In eight starts, Sommer posted a 3-3 record. He pitched 35.1 innings with an earned-run average of 6.62. The stat that jumps off the page for Sommer is his 13.25 strikeouts per nine innings.

That ranked No. 2 in the MonDak Conference and No. 13 in the nation among junior college pitchers.

Sommer attributed the high rate of K’s to his fastball, which has been touching about 88 miles per hour. That is a big bump since Sommer signed with Lake Region last May.

“I’d say my fastball pretty much high in the zone,” Sommer said of the key to his success. “I gained probably 5 miles per hour. It was pretty big for me.”

That jump in velocity was the product of hard work.

“We were doing a lot of the drive-line stuff for my arm, throwing weighted balls,” he said. “We were doing band stuff every day and going to the weight room.”

Sommer has also been trying to improve his secondary pitches.

“I’ve been working really hard on my changeup,” he said. “It was kind of iffy during the season. I still throw it a little bit, but not too much. My slider has been really good. It’s been breaking a lot. They say I’ve got more of slurve than a slider. I’ve been working on my cutter, too.”

Going to the next level, Sommer is going to need some, if not all, of those pitches.

Pitching for Mary is a big step up for Sommer, who stated his dream of being a Major League pitcher when he signed with the junior college. The Marauders play in the Northern Sun Intercollegiate Conference.

“They seem like a pretty tough team,” Sommer said of Mary. “The coach seems really good. I’m pretty excited to see what it’s all about.”

Sommer also pointed out that the Marauders are on the cutting edge of technology, employing high-speed cameras to assist on play development.

“I’m excited to check that out,” he said.

Playing big league baseball has been a long-time goal for Sommer, a former Northwest All-Star who focused solely on pitching this past season.

“Ever since I was really, really little I wanted to be a baseball player,” he said.

That dream grew when he was 12 and his All-Star team qualified for the state tournament. It grew again the next year when his team went to the regional tournament in Irvine, California.

To prepare for the next step, Sommer has been working hard at staying in shape.

“I’ve been going up in the mornings and doing (plyometrics) on the field,” he said. “I’ve been throwing some bullpens.”

Then, Sommer has been going out on pizza delivery.

Sommer, the son of Linda and Dion Sommer, is looking at studying sports and leisure management or kinesiology at the University of Mary. 1 comment