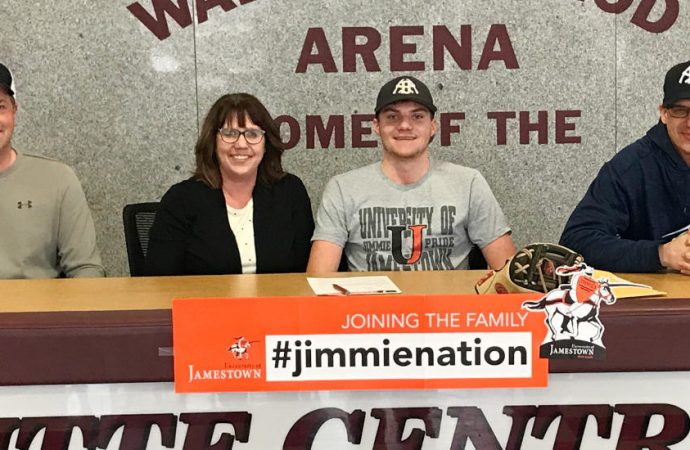 Butte Central senior Ryan Wahl is joined by his parents, Clint and Robyn, and Butte Miners coach Jeff LeProwse right, as he signs to play baseball at the University of Jamestown Monday at the Maroon Activities Center.

It takes a special occasion to get a break from practice when Butte Central head coach Brodie Kelly is in charge.

Monday afternoon, however, presented such an occasion.

Butte Central’s players rushed out to the lobby of the Maroon Activities Center to watch teammate Ryan Wahl sign an NAIA National Letter of Intent to play baseball at the University of Jamestown in North Dakota.

Jeff LeProwse is the head coach of Butte’s American Legion Baseball team the Butte Miners. He said a local player signing with the Jimmies was worth the break.

“They’re a big-time program,” said LeProwse, who pointed out that Kelly made a late change to the practice schedule. “It’s a big deal for him.”

Wahl will head to Jamestown ready to do whatever the Great Plains Athletic Conference team wants him to.

“They’re going to start me off for fielding, pitching and batting,” Wahl said.

Wahl has been a standout on all three for the Miners.

Wahl and his parents are joined by his teammates on the Butte Central basketball team.

He has also been the ace of the Miners pitching staff the last two seasons, and LeProwse is expecting very big things from Wahl this season.

“I think they’re going to give him a chance to be a position player, but Ryan is a fantastic pitcher,” LeProwse said. “He’ll be one of the best pitchers in the state this year.”

LeProwse said Wahl was a much better pitcher than his 2-7 record might suggest.

“What happened was every time we’d play a really good team, Ryan was going to pitch,” LeProwse said. “He’s going to face the best. Coming into this year, people are going to be scared when Ryan Wahl takes the mound.”

LeProwse said Wahl’s strength is his positive attitude on and off the field. The coach said he works hard to be the best player he can be.

“There is nothing that fazes him,” LeProwse said. “We could give up 11 runs, and he will come into the dugout with a smile on his face. He will never yell at a teammate. He’s just a good kid.”

“That’s why he’s been so successful,” LeProwse added. “If you throw something down the middle and the umpire will call it a ball, he’ll just get up and do it again. That’s what he does.”

After playing mostly third base in 2018, Wahl took over at shortstop last season. He ended up earning All-State honors at the position.

Wahl, who played with Big Sky Baseball in Three Forks last fall, has a good mix of pitches.

“I’m kind of a fastball start guy,” Wahl said. “Then I can mix in some off-speed pitches and some knuckleballs.”

Wahl figures his fastball tops out about 84 miles per hour. His straight knuckleball comes in about 73 or 74.

“So, it’s a good off-speed pitch to kind of throw them off guard,” Wahl said.

Wahl, the son of Clint and Robyn Wahl, is a member of Butte Central’s Southwestern A regular season championship team. He is also a standout in the weights on the BC track team. He is the second successful multi-sport athlete in the family, following in the footsteps of his sister, Taylor.

“They have a good school, too, and that was ultimately what I was looking for so I can get a good education,” he said. “And they have a really good baseball team. That program will help me build on myself to be a better person.”

Wahl plans to study biology with an ultimate eye on pharmacy school, possibly at the University of Montana. He said he made up his mind to play for the Jimmies about a month ago.

“I wasn’t quite sure if I really wanted to make that commitment,” Wahl said. “I decided a little while ago that I think it will be a really good experience and help me find myself as a person.”

Wahl the Miners open the 2020 season April 26 with a road doubleheader against the Bitterroot Bucs.