Ryan Burt sits between his parents Gary and Melissa before signing to play baseball at the University of Mary Saturday afternoon. Burt’s grandparents, Henry and Colleen Klobucar, and his sister, Makayla, stand behind him.

Butte High senior Ryan Burt did not get a chance to visit the campus of the University of Mary before signing to play baseball for the Marauders.

The coronavirus pandemic made sure of that.

Luckily, Burt had a school representative close by.

University of Mary pitcher Liam Sommer just so happens to be living in town. Sommer is also a former Butte Miner and workout partner with Burt.

Sommer sold Burt on the school and the baseball program.

“Yeah, he did. A lot,” Burt said when asked if Sommer recruited him to Mary. “He talked about the school. He said it is a really nice school.

“I couldn’t go visit,” Burt said. “I got like a virtual tour, I guess. I saw videos of the campus.”

With a small group of family and friends gathered at the house of his grandparents, Henry and Colleen Klobucar, house Saturday afternoon, Burt signed an NCAA Letter of Intent to play baseball for the Division II Marauders.

He signed while sitting between his parents, Gary and Melissa Burt, at a table on the driveway. Burt’s grandparents and sister, Makayla, looked over his shoulder. 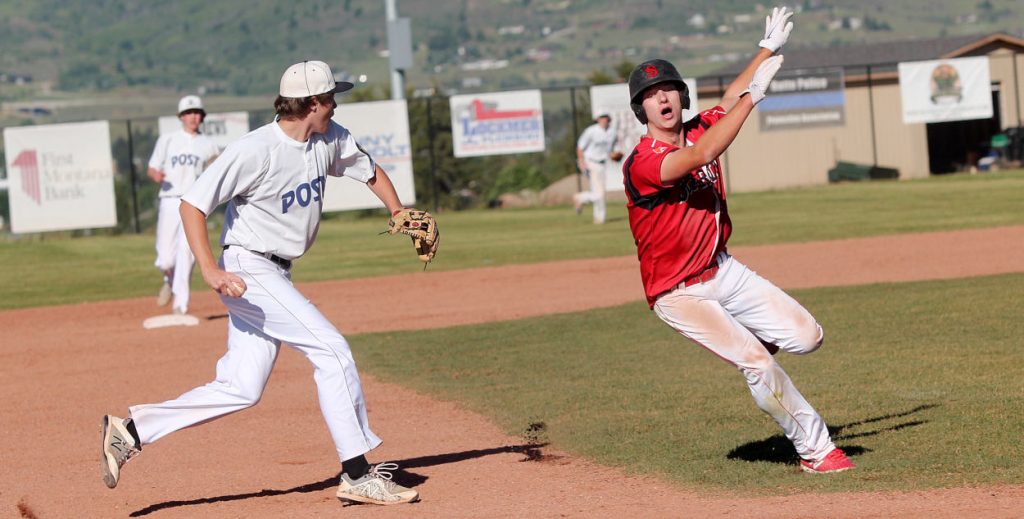 Billings Scarlets runner Logan Meyer dodges a tag as Butte third baseman Ryan Burt winds up to throw to first base in this July 2 Butte Sports photo from 3 Legends Stadium.

Burt, who said the signing was about two and a half months in the works, plans to concentrate fully on pitching at Mary.

The development side of Mary’s program was a big selling point for the 6-foot-7, 220-pound Burt, who was throwing his fastball about 86 mph while playing for Big Sky Baseball, a fall baseball program out of Three Forks, last fall.

In addition to four-seam and two-seam fastballs, Burt also throws a curveball and a changeup.

“They’ve got a really good development program,” Burt said. “I should be throwing a lot harder once I get down there.”

Mary was also one of the leading teams in using the latest technology and data to assist in player development, something that also attracted Sommer to the Bismarck, North Dakota school.

“They don’t have a fall season,” Burt said of the Marauders. “They just have a spring season. In the fall they just work on developing.”

Jeff LeProwse, the head coach of the American Legion Butte Miners, said focusing on pitching will be big for Burt.

“I think will really benefit Ryan,” LeProwse said. “Out of all of her kids, I always told him he has the highest ceiling. He’s had a little bit of control issues in the past, but he can work past that.”

Burt also plays the corner infield positions for the Miners.

Burt, who emerged as a key bench player in Butte High’s run to the Class AA State boys’ basketball tournament last month, said baseball has long been his true love.

He has been playing for as long as he can remember, and he was looking forward to playing a full season for the Miners this year. He missed a good chunk of last season after dislocating his knee at practice.

This season, Burt and the Miners were looking to be one of the top teams in the Class A before the start of the season was put on hold by the pandemic.

The Miners were supposed to start full-squad workouts a couple of weeks ago. The team was set to open the season next Sunday. That doubleheader at Bitterroot, however will not happen.

Legion Baseball already canceled its World Series and regional tournaments. Montana, though, is hoping to play a shortened campaign once restrictions from Gov. Steve Bullock’s stay-at-home order are lifted.

Burt, who moved up to the Miners from the Muckers before the 2018 season, will not turn 17 until July, meaning he will be able to come back as a “super senior” for the 2021 American Legion Baseball season.

Mary went 3-9 in road nonconference games before the season was stopped because of the pandemic. Sommer, a sophomore, signed with Mary after one season at Lake Region State College in Devils Lake, North Dakota.

Sommer posted a 3.18 ERA and a 1.92 WHIP in 5.2 innings for Mary, which plays in the Northern Sun Intercollegiate Conference.

At Mary, Burt will room with Sommer as they two Butte boys chase their baseball dream as far as they possibly can.

“I’ll probably just keep working, see how fast I can get my velo and get more accurate,” Burt said. “I’ll keep working and see where that takes me.”