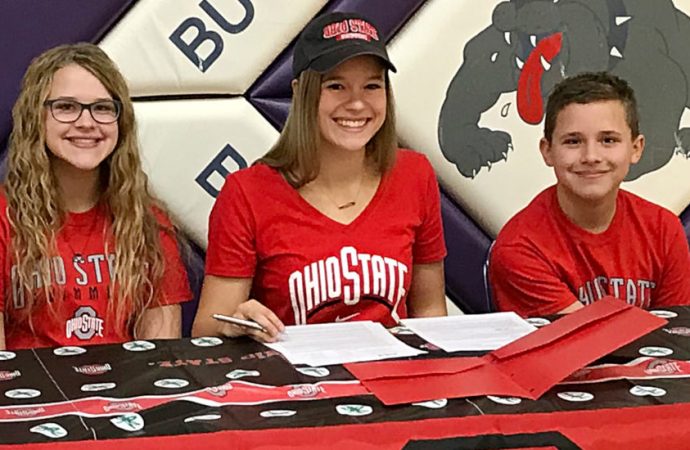 Butte High senior Catherine Russo, center, is all smiles before signing to swim at The Ohio State University. She is seated between her sister Isabel and her brother Philip.

Since the Butte High senior has already qualified for the  U.S. Olympic Swim Team Trials, that is really saying something.

At exactly 12:30 p.m., Russo officially signed to swim for The Ohio State University in front of a collection of family, coaches and friends at the Richardson Gym.

“I’m super excited about my decision,” Russo said after signing while seated at a table between her sister Isabel and brother Philip. Her parents Dr. Anthony and Amy Russo were also on hand for the signing, which took place on National Signing Day.

While the six-time Montana state champion still has the goal of swimming in the Olympics, she has long stated her No. 1 priority was to swim for a major college team. The Ohio State of the Big 10 certainly fits that bill.

Russo emphasized “the” in the name “The Ohio State” when talking about why she decided to be a Buckeye. The reason, she said, is because she wants to keep getting better.

“Their swim program is so focused on development, which is huge,” Russo said. “I’ve been traveling to Bozeman since sixth grade for practice. To have that focus on ‘you’re good, but we can make you better’ was awesome for me.”

The Ohio State was the first place Russo visited. That visit helped turn her focus from the Ivy League to the Columbus, Ohio, school. She verbally committed to the Buckeyes in late March.

“I stepped on campus and thought, ‘This is where I need to be.’ It just one of those feelings,” Russo said.

In college, Russo said she will major in exercise physiology and minor in neuroscience.

“I don’t necessarily want to follow exactly in his footsteps, so I’m definitely kind of looking around,” Catherine Russo said.

Russo was also impressed by how far the Buckeyes’ coaches were willing to go for her.

“One of them came out and watched me at high school state, which is amazing because it’s Montana,” Russo said. “You’re flying from Ohio to Montana to watch me. It’s really amazing the investment they were willing to make.”

At the state meet, Russo again claimed the state title in the 100-yard butterfly and 50-yard free style. She also won those events as a freshman and a sophomore. She is the overwhelming favorite to win them again as a senior.

Russo would like win many more gold medals, but Montana rules limit swimmers to two events.

“That would be so much fun,” Russo said of competing in more events. “It is also nice with the rules the way they are. They helped me get better in those two events specifically, and I think those events were the ones I was recruited for. Being able to get so good at those events has helped me a lot.”

Focusing in on one event also helped Russo qualify for the Olympic trials in the 100-meter butterfly at the 2019 Futures Championship in Des Moines, Iowa, in early August. The trials for the 2020 Tokyo Summer Olympics is June 21-28 in Omaha, Nebraska.

“I definitely didn’t think I’d get it before college,” Russo said of a qualifying mark for the Olympic trials. “It’s nice the way the timing works out. The next Olympics (2024 in Paris) is after my senior year in college.”

The Olympics would be a dream, Russo said. But swimming in college is ultimately what her career has been all about.

Russo’s senior swimming season at Butte High begins next month, though her season will be delayed because of a trip to Atlanta for a national meet.

She said she is working on improving — and possibly adding another Olympic trials qualifier — before she goes for her seventh and eight state titles in February.

“I have very time-specific goals that I’m working towards this season,” she said.