Chris Mouat did not even have to watch Natalee Faupel play in a game before he knew he was seeing something special.

All the MSU-Northern head coach had to do was watch Faupel go through pregame layups before a Butte High girls’ basketball game.

“I watched her in warmups and thought, ‘Man, that kid can get up in the air,’” Mouat said Tuesday. “I loved her athleticism.”

At the time, Faupel was a 5-foot-6 freshman point guard, looking for playing time behind the great Lexie Nelson, who was in the final year of her remarkable Bulldog career.

“Obviously, Lexie Nelson was there, so I wasn’t going to be starting,” Faupel said. “My sophomore year I got to start. Then I kind of grew a little bit.”

Faupel went on to become one of Butte High’s all-time great athletes. She might also be the most underappreciated.

In the spring of 2013, Faupel became just the second Bulldog to earn 12 varsity letters, joining Anna Fabatz in the exclusive club. Ally Cleverly joined that group last year. Tommy Mellott and Haley Herron will do the same this year.

In college, Faupel only got better. She closed her career at MSU-Northern with back-to-back first-team NAIA All-American seasons.

“She was a two-time first-team All-American,” Mouat said. “That doesn’t happen very often.”

Thanks to the coronavirus pandemic, however, Faupel finds herself at the crossroads of her playing career.

Faupel was set for a big season playing for the Southern Peninsula Sharks in Australia. However, the season was put on hold on the eve of the season opener in March.

The move came on the same weekend that Montana’s state basketball tournaments were brought to a sudden halt for the same reason. Faupel and her teammates hung around in limbo before she headed back to Montana on March 31.

“They said even with if it came back, they wouldn’t bring the imports back,” Faupel said Tuesday. “They were hanging out for a while. Then they finally made the decision.”

Faupel was one of two “imports” allowed on the team in the “State Championship” level, which is one level below the WNBL, a league that includes numerous players from the WNBA.

Working out as much as she can while back in the Mining City, Faupel is not sure if it is time to get started on her post-playing career or give professional basketball one more shot.

Faupel played in 80 varsity games for the Bulldogs. That makes her one of just 11 Butte High girls to take the court that many times. 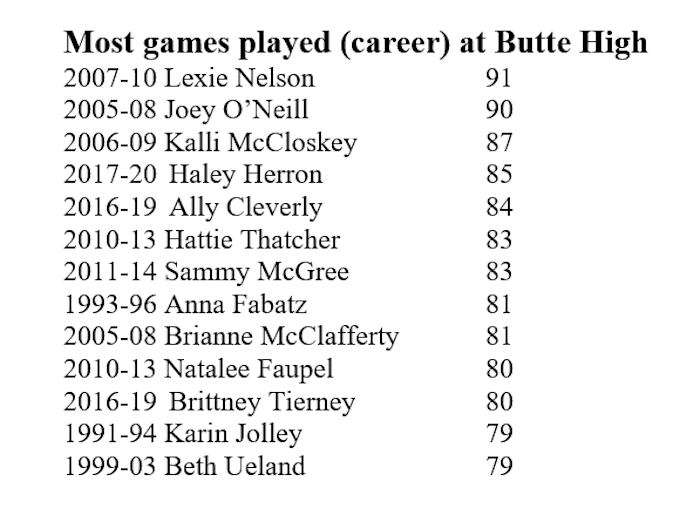 In track, Faupel lettered four times, and she qualified for the state tournament in the triple jump and javelin as a senior.

Many, however, assumed Faupel would choose soccer for her college career.

Before her senior season, then Butte High girls’ soccer coach Sean Cleverly, who is Ally’s father, had some high praise for Faupel.

“She’s probably the best soccer player who’s ever played for the Butte High girls,” Cleverly said. “If I played her at (goal) keeper, she’d probably be the best keeper in the state. She’s that good at everything she does.”

Faupel, who ended up playing goalkeeper some that season because of injury, was named all-conference all four years at Butte High. Even though she played on a team that won just a few games over four years, Faupel was named All-State as a sophomore, junior and senior.

“I thought soccer might be her sport,” Mouat said. “I thought she might be a Division I soccer player. When we got her, I was thrilled.”

Mouat, a former Butte High coach who just finished his 15th season at Northern, landed his prized recruit while the Skylights were in town to play Montana Tech.

“She handed me the paper work when were at the HPER,” Mouat said. “That was a great day for our program.” 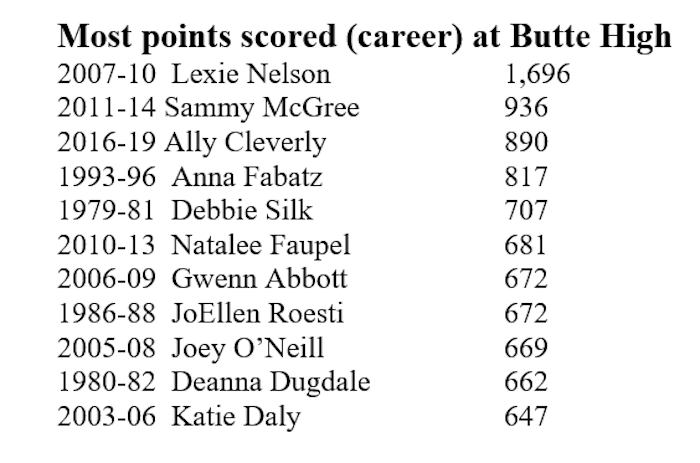 The rest of the Frontier would soon learn just how great of a day that was for the Lights. At the time, not many seemed to notice.

Tech’s Kerie DePell, who was about to announce she was leaving town, and Montana Western’s Lindsay Woolley were the only other coaches to reach out to a player who somehow flew way under the radar.

“I was really quiet. I didn’t have any blow-up success,” Faupel said, playing down her stellar Butte High career and almost trying to let other college coaches in the state off the hook. “Coach Mouat kind of pulled that out of me.”

Faupel, who was 5-10 by the time she played for the Skylights, was an instant success at MSU-Northern.

She also seemed to play her best when the games were big.

Mouat points to a game in the Sweet 16 of the NAIA National Tournament at the end of that freshman campaign. Faupel scored 28 points as the Skylights nearly upset eventual national champion Oklahoma City.

That performance blew her head coach away.

“That showed she had the opportunity to become a pretty good player,” Moat said.

Faupel’s scoring average increased each season while helping the Skylights advance to the NAIA National Tournament four times. She went from 13.1 to 16.3 to 17.8. 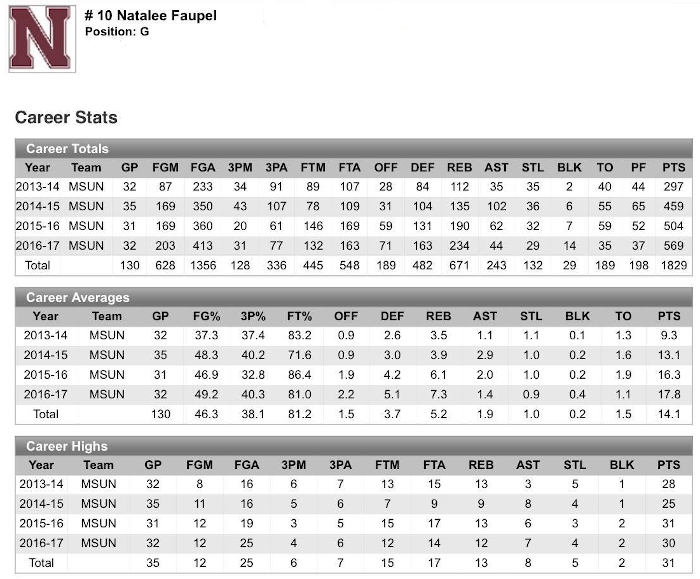 Mouat said Faupel was still improving during her senior season.

Hard work was also one of Faupel’s calling cards.

Mouat mentioned a time when he told Faupel she needed to be able to knock down the turnaround jumper from the high post if she wanted to play post.

A few minutes later, he saw her practicing just that.

The practice payed off.

“If anybody played us zone, we put Natalee at the post,” Mouat said. “She was deadly.”

Faupel finished her Northern career with 1,829 points in 130 games. No Skylight has ever scored more.

That all-time record is something Faupel humbly plays down. She says a player will pass it up once a coach runs a more up-beat scheme than Mouat.

Mouat said that is just Natalee being Natalee.

“Nat’s never been one to want the spotlight,” he said. “She wants to share the credit.”

That personality helped Faupel fit in nicely with the community in Havre, Mouat said.

“Her host family was great. They were a great fit. They were connected through (Butte’s) Zach and Mara Osborne,” he said. “People really grew to like Natalee. It wasn’t just basketball. She’s just a great person.”

After graduating from Northern in the spring of 2017, Faupel went to Idaho State University in Pocatello to work toward her master’s degree in athletic administration.

There, she served one season as a graduate assistant coach for the Bengals of the Big Sky Conference during the 2017-18 season.

“My numbers weren’t bad, but our win-loss record was atrocious,” Faupel said. “That was hard to swallow.”

Faupel moved back to Havre after the season. There, she got a job working in the MSU-Northern admissions department. She also served as an assistant under Mouat.

“She’s a natural coach,” Mouat said. “We turned some things over in film, and she took the time to do some things to that added to what we were doing. It was a big help. She came up here and worked in our admissions office, and she was an outstanding recruiter.”

Faupel left the program for Australia in February.

“It was a tough day when she left,” Mouat said. “The kids had gotten used to her and loved her. They idolized her. She made a huge impress up here.”

In Australia, Faupel got ready for the season. She also got a glimpse of what she would like to be as a player by watching some WNBA standouts compete in the WNBL.

“In Denmark they didn’t have any higher levels than I was going to play,” Faupel said. “In Australia, it was pretty cool. You can watch games courtside for about 30 bucks, then you can talk with (the players) after. That was pretty cool.”

Faupel, who was also going to coach a U-14 team while in Australia, has dreamed of playing in the WNBA. She said she is not so sure should could pull it off, but she would definitely like to try.

“I would like to train with them to see,” she said. “They have unique athletic abilities. They can get off 3-point shots super-fast, and they’re super physical.”

Faupel said she would have put in some serious time to get to that point.

While he cautioned that the WNBA players out-of-this-world good, Mouat said he could see Faupel playing at that level if things work out. He said she would likely have to play point guard.

“I would never sell Natalee short on anything,” Mouat said.

Whether she is going to take one more swing at that dream is hard to say. With the lost season, Faupel is looking at almost another full year before she gets back on the court.

As it is, working out is not the easiest thing to do for an aspiring professional basketball player. The gyms are closed, and Faupel does not live in a house with a weight room.

“I just do some home workouts,” she said. “Yesterday I went to East to run. I do a lot of body work.”

Faupel is trying to decide if she wants to push back her career, which will be involved in sports somehow, as a coach or an administrator.

“I think if I start working, that will be it because I won’t be able to dedicate enough time to playing,” Faupel said. “At this point, I think I know what I need to do, but I would want to hire somebody to push me.”

Whether it is continuing as a player, coaching or whatever she decides to do, Mouat said he knows Faupel will be successful.

That statement is not something to be taken lightly, either. Mouat was, after all, the guy who spotted greatness in Faupel just by watching a simple layup.

“Natalee could probably do anything she wanted,” Mouat said. “She is very talented.”