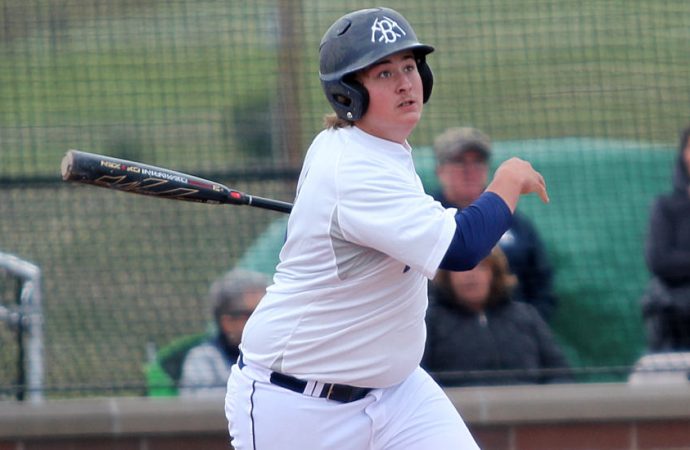 Butte Miner Eric Hart follows the ball he hit deep down the first-base line during the first game of a doubleheader with Dillon June 22, 2019 at 3 Legends Stadium. The ball rolled to the corner, and Hart doubled. (Butte Sports file photo)

An actual sporting event will take place in the Mining City for the first time in two and a half months this weekend.

The Butte Miners and Muckers open the American Legion Baseball season Saturday. The Miners play a 1 p.m. doubleheader against the Kalispell Lakers at Miners Park at 3 Legends Stadium.

The Muckers hit the road for a noon twin bill against the Belgrade B team. The lower-level Butte team will play its home opener at 1 p.m. Sunday against the Bitterroot Red Sox B.

Saturday’s games between the Miners and Lakers will be the first of any kind played in Butte since the Class B State boys’ and girls’ basketball tournament was halted by the coronavirus after the semifinals on March 13.

The games will be played with some fan restrictions. The grandstands at 3 Legends Stadium will be limited to about one third of capacity, about 100 fans. Also, fans down who choose to sit on the grass down the base lines must stay 6 feet apart.

Only a handful of players will be allowed in the dugout. Others will be spaced out on chairs down the base lines. There will be no high fives and no sunflower seeds.

“It’s definitely going to be different,” Butte Miners coach Jeff LeProwse said. “You run off the field, you huddle up and talk about the last couple of innings. It is going to be weird not being able to do that.”

The rest of it will be, well, baseball, and everyone is thankful for the chance to play.

“I think everybody is itching for some sports,” LeProwse said.

The Miners are also thankful for a talented roster that they hope has them contending for a title at the Class A State tournament, which begins Aug. 6 at a site to be determined.

“Ryan Wahl is a two-time All-State guy. I have high hopes for him this year,” LeProwse said. “He’s a hard worker. I’m a fan and I’m glad guys like him get to finish their senior year. Same with Burt. The ceiling with him is really high. He could be one of those guys who absolutely dominates people.”

“We know we have three starters,” the coach said. “We’ll be looking for that fourth and fifth when we start our games. We’ve got a lot of guys who can throw.”

Reece Cox and Kenley Leary appear to be early contenders for those spots, LeProwse said. However, it is too early to tell.

“It’s going to be up for grabs,” LeProwse said. “I’m glad we get to play these first four games before we get into conference.”

The coach said he is not ready to set a regular starting lineup for his team, which began practicing April 29.

“There are some challenges going on right now,” he said. “Practice has been really competitive. I’m expecting we work that out during games. Your bat is going to get you a job.”

Eason Lakala is another player the Butte clubs hope to use once he returns from injury.

Matt Esquibel and Luke Stajcar will assist LeProwse on the Miners. Brad Ruthoford and Dyllan “Kruk” Lane will lead the Muckers.

The Miners will play 42 games in 21 doubleheaders. The Muckers will play 15 twin bills for 30 games. Neither team will participate in an invitational tournament.

The Southern A District tournament is scheduled to be played in Three Forks. However, LeProwse said there is a good chance that could be changed to a tournament in which the higher seeds host lower seeds at their home parks.

After playing the Helena Senators and Bozeman Bucks in a triangular Sunday in Bozeman, the Miners will open the conference season at 6:30 p.m. Wednesday at home against Gallatin Valley.