It almost seemed like a no-brainer that Jake Vetter would be the first male athlete to sign with Montana Tech’s new cross country team.

Vetter, after all, graduated from Butte High as an accomplished distance runner in June. He also currently attends Montana Tech, taking general classes with an eye on a degree in occupation, safety and health.

On Thursday afternoon, Vetter and the Orediggers made the seemingly inevitable official. Surrounded by his family in the Montana Tech Hall of Fame Lounge in the HPER Complex, Vetter signed an NAIA National Letter of Intent to run for the Orediggers.

While competing at Butte High in cross country, soccer, basketball and track, Vetter quietly hoped that his hometown school would add cross country so he could continue his career as a competitor.

Vetter said he was looking for “anywhere I could explore my options and have the chance to run, and for it to be at Tech is amazing. I get to stay in Butte, where all my family is, and this community is second to none in supporting the athletes that they have.”

“It doesn’t take you long to find him in results,” Kughn said, adding Vetter has Butte High’s school record in the 5-kilometer race. “He’s arguably the best runner to ever come out of Butte. He’s someone that’s already bought into Butte, the community, Tech, the school and someone with a skill set like that, why wouldn’t you want him. He’s a great person to start the program with.” 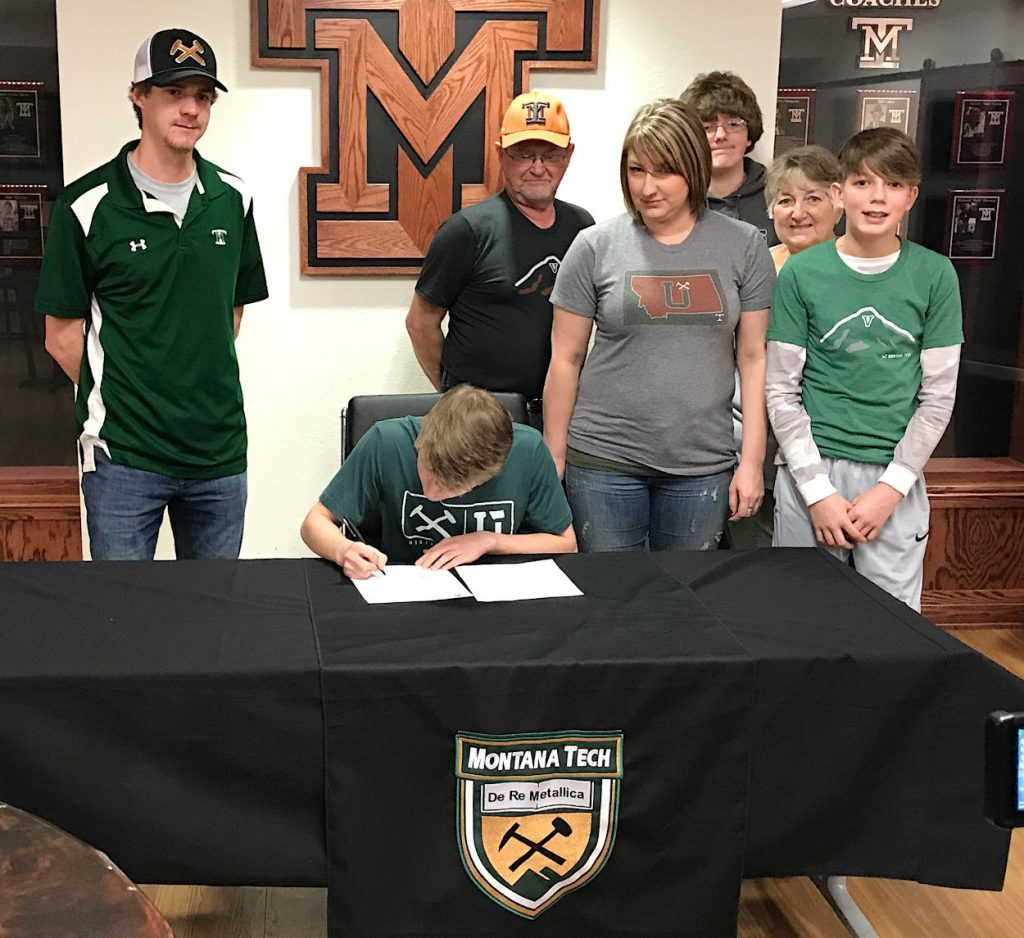 Vetter will join the Orediggers after a stellar career at Butte High. He competed in the state cross country meet three times for the Bulldogs. As a senior in October of 2018, Vetter placed 23rd at state with a personal-best time of 16 minutes, 46 seconds.

That time, which was about 40 seconds better than his previous record, came despite running most of the season with a knee injury.

Vetter also played soccer for the Bulldogs that fall because the team was short on numbers. He injured his knee in Butte High’s first soccer game.

“I talked to (Butte High cross country) coach (Guy) Wadas about playing soccer, and he said, “As long as you don’t get hurt,” Vetter said. “Then within probably the first 5 minutes, I hurt my knee.”

Vetter then ran much of the season with his knee wrapped.

“I was able to run in still over half the meets and most soccer games, sometimes both in the same day,” Vetter said. “That’s always exciting.”

In May, Vetter placed third in at the Class AA State meet in the 800-meter race with a time of 1 minute, 59.72 seconds. He took sixth in that event a year earlier.

During his first semester at Montana Tech, Vetter said he has been running and working out in the weight room. He said he cannot wait to run for the Orediggers, who plan to have a full track team up and running in the next couple of years.

Tech’s cross country runners will compete as unattached runners at Frontier Conference meets during the first year of the program, which is the 2020-21 school year. Vetter is on board with that because track is his favorite sport.

“It’s going to be awesome,” Vetter said of the Oredigger program. “It’s a chance to be part of something new and exciting. You can help it grow. It gives you the opportunity to keep running and competing, which is all athletes want to do.”

Kughn, who ran for Montana State University, said he is looking to build up more than the Oredigger program.

The program and the school will benefit each other, Kughn said. He plans to have 10 men and 10 women runners on the roster. The coach said that roster should start to fill up fast now that he has the first male and female runners.

“There’s a lot of interest in the school first of all,” Kughn said.  “It’s a great academic institution, and that goes hand in hand with distance runners quite a bit. Getting these first signees on the board publicly will be huge for us. It will be a catalyst to get the ball rolling.”

Vetter was joined at the signing by his mother, Lisa Hansen, his grandparents Randy and Judi Vetter, and his brothers Cooper, 12, and Tanner, 14.