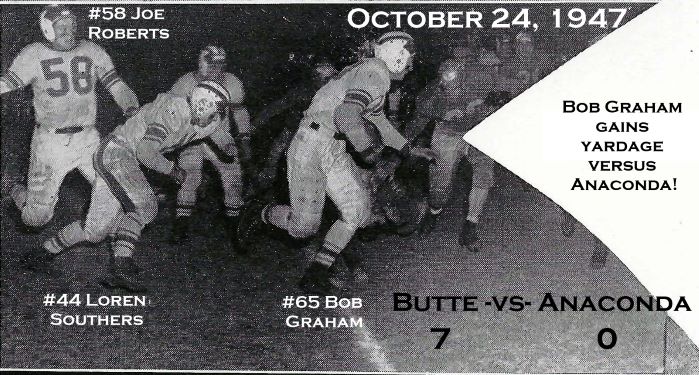 Butte’s successful football tradition was born in the dirt of the grade school fields from where it was mined to be polished at Clark Park, then displayed at Naranche Stadium, testified two men who knew and who know.

Jack Saunders and Bob Williams both lettered in football for Butte High the first time in 1947 and will be honored, along with Dan Schmitt, as Diamond B’s Friday night, September 23 at the Bulldogs’ home game with Missoula Big Sky. The Diamond B’s recognition if for players who first lettered in the sport at Butte High 75 years ago.  They’ll be honored along with the first-time letter-men from 1972 and 1997, who  are going in as Golden B’s and Silver B’s, respectively. The organization, a men’s football auxiliary for Butte High, is the only one of its type active in the state. 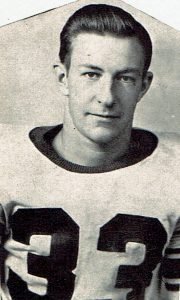 Saunders will be the only one of the Diamond B’s inductees present. He and his wife moved back to Butte a little more than a year ago after several stops in a long work career. Williams resides in Albuquerque, New Mexico, and said he decided the journey was too far for his health to allow. All three men are in their early 90s. Attempts to contact Schmitt for this article were unsuccessful. Saunders said he plans to speak to fellow auxiliary members at the Silver B’s dinner that will precede the game.

“I’m in pretty good shape and I’m happy for that,” Saunders, 91, said in a recent telephone conversation. “I played football and liked to play. We had a very good grade school team in those days and we played all our games at Clark Park.”

Saunders said his younger brother, Tom, is also a Golden B, and that another younger brother, Ken, was, perhaps, the best player of the three, but had to give football up freshman year because of a heart condition.

Saunders said Herman Engebretson coached the Emerson teams and they practiced on the playground.

“Naranche was a great field and we might’ve had an edge there,” he said about progressing through the ranks to high school ball. “We had some great games there.”

“It was great playing at Butte High,” Williams, a former two-way end, said. “Swede (Dahlberg) was our coach. I enjoyed every bit of it.

“Butte had a good grade school football program then. Before I played at Butte High, I went to Garfield and then to Webster, and graduated eighth grade from there.” 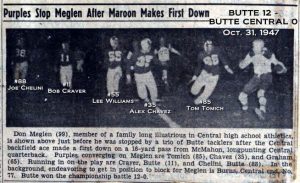 Williams’ twin brother, Lee, played the other end and also some at running back. Lee Williams died in 1975.

“They were identical, too,” Saunders remembered. “You couldn’t tell one from the other.”

Longtime Butte High coaches Swede Dahlberg and Bill Hawke guided the program and Saunders and Williams chuckled about two men then in charge of a successful varsity while today’s time of specialization sees deep staffs of capable personnel coaching the squad.

The gear has changed, too.

“It wasn’t as bad as people like to think it was,” Saunders said.

Williams agreed, though, that the use of helmets without facemasks sometimes meant “you didn’t always go home with the same nose you wore to the game.”

Both men served in the military and then enjoyed long working careers with the telephone company and occasionally bumped into each other at job sites. Also, both still enjoy the company of their longtime spouses. Williams, 92, and the former Peggy Jo Skubitz have celebrated 62 years of marriage. Saunders and “Bertie” have been married 70 years and he is proud to tell about how she led the Butte High band as the baton-twirling majorette down the Pasadena avenue in the Rose Bowl Parade prior to graduation.

“They were pros, in that band,” he said, allowing the listener to imagine the beam in Saunders’ face.

Saunders expressed some disappointment that is was unlikely neither Williams or Schmitt would be able to attend Friday’s festivities. 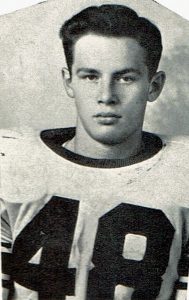 “I was hoping to get together with Bob and we do this speech, maybe together, and he could help me out with what to say,” Saunders said. “Dan Schmitt was my best friend growing up, played together all through grade school and high school.”

Williams, who also played basketball for the Bulldogs, said he hasn’t gotten back to Butte in a while. 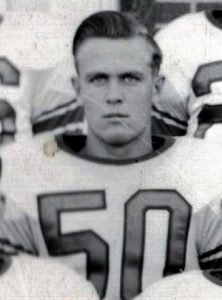 “I have no family left up there and there are some health issues,” he said.

He went to university in Missoula after graduating from Butte High and played golf on the Grizzly team.

“I wasn’t quite big enough to play college football,” he said.

Saunders said the Williams twins were both “great golfers.” Bob Williams noted golf was not yet a sanctioned high school sport when he was at Butte High in the 1940s, preventing him from lettering on the links then.

After graduating university, Williams joined the service and then returned to Butte after completing his commitment. He wound up with the telephone company. The career took him Great Falls, Helena,  back to Great Falls, and then to El Paso, Texas, in 1968 before settling him in Albuquerque in 1982. He and Peggy Jo raised a family of four children.

“We had some good teams at Butte High,” Williams said. “We won most of our games. We won the conference in ’47 and played Billings in the Thanksgiving Day (state) championship game. We lost 21-20 right at the end.” 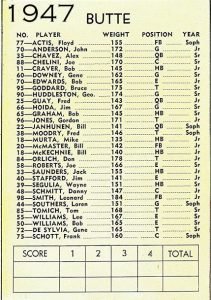 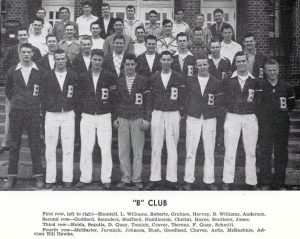 Despite it being held on Thanksgiving Day, about two weeks later than state title games are played now in Montana, Williams said the temperatures “weren’t that bad, weren’t that cold.”

A game at Naranche Stadium versus Helena High, was, though, he and Saunders both said.

“It rained and then it snowed,” Williams said. “The field was a sheet of ice. You couldn’t change directions out there on the field. You’d go down.”

“It was a great game, but we didn’t have enough sense to wear tennis shoes,” he said. 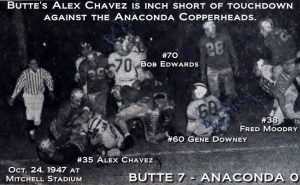 “Alex Chavez was our quarterback,” Williams said. “He wasn’t very big, but he was quick and he was a great passer. He went to play for the Butte Buzzies (semipro team).”

Williams said the memories of Butte High football he holds are good.

“I enjoyed most the action, the competition,” he said. “And, we won most of the time and that always helps – having success. Butte High has a lot of tradition and I’ve always enjoyed being a part of it.

“I wish I could see all the guys this weekend and I wish all the members the best.”

Playing on a good team was the best education and man like Saunders could ask for, he said, touting how the experience, and that of serving in the Air Force, fastened him to a guidance for a good life. He didn’t stay in Butte, either, and experienced many locales as Mountain Bell took him down many roads to many opportunities.

“First, Swede Dahlberg and Bill Hawke were two terrific coaches,” Saunders said, noting that football was his sport, even playing spring football rather than run in track. “Bill Hawke was a great scout, too.”

A couple years “working on the hill” after graduation spurred Saunders to go into the Air Force in 1951. He earned his honorable discharge in 1955 after learning skills in radar detection while in the service.

“I got out and took the entrance exam to go to (college) in Bozeman,” he said. “But, I’d also applied with the phone company and got an offer.”

His skills learned in the Air Force translated well to a transformation phone service in the United States was then undergoing and so Saunders was hired to help the company progress from operator service to dial service.

“It was a great company with great people,” he said of Mountain Bell. “We ended up in Helena three different times, in Butte, Billings, Missoula, … moved around.”

He took some football philosophies learned at Butte High on his travels.

“Learning about team efforts on the football field and how important team is, I think, is what I enjoyed the most,” he said. “Swede said every offensive play is designed to score a touchdown. Learning the game from Swede was one of the best things about playing football. You learn to always give it your best shot. I knew whenever I talked to somebody if they ever played on a team. Team effort has been an asset in my life.

“I couldn’t learn it in a book. It helped me learn to connect with the guys in the service, too, and in life. Being sports-oriented as helped me be successful. Football, service, Mountain Bell all helped me be a better person.”

Friendly as both Saunders and Williams were to talk to on the phone, both said it might not have been the case if they’d been contacted on the weekend. College football games are televised on Saturdays, and NFL games on Sunday, and both men keep up with their sport.

“I might not have liked (the interruption),” Williams confessed.

“The Packers need to pass the ball better,” he said.