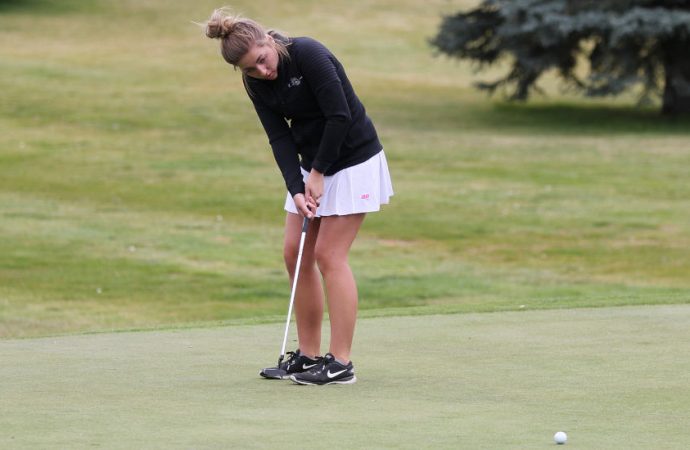 Montana Tech announced the signing of seven recruits for the men’s and women’s golf teams today.

Also signing with the women’s team are Emily Garden of Missoula, Emily Kelly of Butte, Skyler Martin of Shelby and Reyla Williams of Helena.

Additions to the men’s team are Brady Cady and Blake Loberg of Billings and Matt Hobbs of Polson.

“This is a recruiting class that Coach Lee LaBreche would be very proud of,” inter Tech golf coach Sean Ryan said in a statement. “I think Lee did an excellent job of recruiting a group that has such a high ceiling on the golf course as well as in the classroom. I couldn’t be happier that they’ve decided to join this program.”

LaBreche passed away in February at the age of 55, and the Orediggers honored their fallen coach at the Frontier Conference Tournament last month in Arizona.

Kelly is a nine-time letter winner in high school. She transferred to Butte High from Helena before her junior season. She earned All-State honors by placing ninth at the Class AA State tournament at the Butte Country club, helping the Bulldogs capture the third-place trophy.

Kelly won the South West Montana Junior Golf Tour Champion in 2018. She is a valedictorian for Butte High School’s Class of 2019, is a member of the National Honor Society, and was named to the Honor Roll eight times. Kelly plans on majoring in biochemistry.

Garden was a two-time All-State golfer for Missoula Sentinel after finishing fifth as a junior and in third place as a senior at the AA State Tournament.

Garden was a qualifier for the Montana-Alberta Cup and has been the Missoula Country Club’s Women’s Champion for the last three years. She was named Academic All-State in 2017 and 2018 and plans on majoring in nursing at Montana Tech.

Martin has been an All-State performer for the Coyotes all three seasons after placing third as both a freshman and sophomore and taking fifth as a junior at the Class B State Tournament.

Martin, a multi-sport athlete for Shelby High School, was a state finalist for the Wendy’s High School Heisman as well as being named the Great Falls Tribune’s Northwestern Lady Golfer of the Year. Martin, who will compete for the Class B State Championship at Canyon River Golf Course on May 14-15 plans on studying radiologic technology at Montana Tech.

Williams was a two-time All-State golfer after finishing ninth as a junior and 12th as a senior for the Helena High Bengals. Williams was a two-year captain for Helena High and helped her team to a second-place finish at state in 2016. She was a four-time Academic All-State honoree, a member of the National Honor Society, and Student Body Vice President. Williams plans on majoring in biochemistry at Montana Tech.

Cady was an All-State selection for the Broncs after finishing in a tie for sixth the Class AA State tournament at the Butte Country Club last fall.

The Billings Senior Bronc had a season scoring average of 74 and placed in the Top-10 of every tournament his senior season. Cady was the individual medalist in the Billings City Meet. Cady, who was an academic all-state selection for both his junior and senior seasons, plans on majoring in business and information technology and management.

Loberg, of Billings West, recorded six Top-10 finishes as a senior for the Golden Bears and finished ninth at the AA State Tournament. In addition to earning All-State honors this past season, the Golden Bear golfer helped his team take third at AA State in 2018 and tie for second in 2017. Loberg was a two-time Academic All-State selection and a member of the National Honor Society. Loberg plans on majoring in business and information technology.

Hobbs, an All-State golfer for Polson High School the last three seasons, was the 2018 Class A runner-up after shooting rounds of 74-71 at Hamilton Golf Course this fall. Hobbs placed in the Top-10 of State Junior events twice, won the 2017 Polson Bay Men’s Match Play Championship and the 2018 Polson Bay Men’s Club Championship.

“I am thrilled that the Montana Tech Golf team could add these three accomplished golfers. I am very excited about these future Orediggers and the tremendous ability they will bring with them to Butte,” Ryan said. “I think the future of this program is very bright with these three young men teeing it up for Montana Tech next fall.”