Butte High senior Mollee Conlan gives two thumbs up to Butte High coach Arie Grey after signing an NAIA Letter of Intent to run track at Montana Tech Tuesday at the Richardson Gym. Conlan is seated between her parents, Jeremy and Keli. Also pictured is her sister Emilee.

That is why Kughn and assistant coach Jacob Sundberg were at Butte High’s Ross J. Richardson Gymnasium bright and early Tuesday morning. They were there to sign Conlan to an NAIA Letter of Intent to use that speed for the Orediggers.

With family, friends, coaches and teammates looking on, Conlan did just that.

Conlan, who plans to work toward a career in physical therapy, was happy to be able to keep running track while staying put in the Mining City. She said she talked to a school in Oregon, but decided home was where her heart is.

“I’d rather stay in town and be with my family,” she said. “When I first found out (Montana Tech) had a track team I was super excited. I get to stay in town.”

When her Bulldog career comes to an end, Conlan will leave the school with seven varsity letters — four in track and three in volleyball. She also played basketball as a freshman at Butte High.

In volleyball, Conlan was a college prospect who helped the Bulldogs advance to the Class AA State tournament in 2019 and again in 2021. She earned an all-conference honorable mention this past season.

“I looked at volleyball, but I really wanted to try something different,” Conlan said. “I love track, and I thought it would be a great experience for me.” 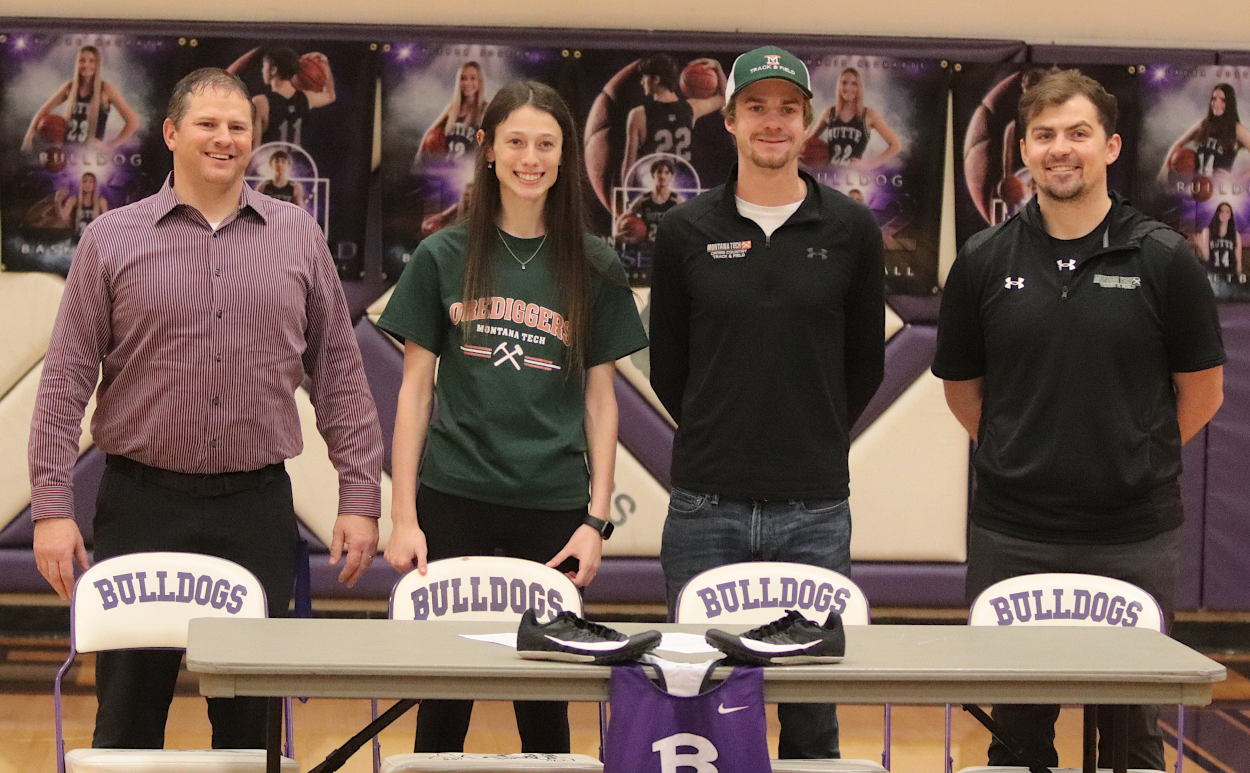 Conlan busted onto the track scene as a freshman, earning a spot on Butte High’s 400-meter relay at the State meet.

After having her sophomore season stolen by COVID-19, Conlan had an outstanding season for the Bulldogs as a junior. She went to state in the 400 relay and the 100 meters. Her fastest 100 time was 12.71 seconds, which was the third best in the Class AA at the time.

She also ran 12.79 to win the Western AA title in Kalispell.

“She didn’t have the state tournament that she wanted to last year, but we know, potential wise, that’s she’s one of the top runners in the state,” Kughn said.

Conlan plans to run the 100 and 200 at Tech. She also said she will add the long jump to her repertoire, starting with this coming season.

Kughn said he expects Conlan to run the 400 and compete in 1,600-meter relays for the Orediggers.

“She likes the shorter the better, and that really shows her talent,” Kughn said. “We know we can train to work on the full 100, 200 and 400 and relays. She’s got that fast twitch.”

Butte High coach Arie Grey does not see that as a problem for Conlan. He said she has a wide range as a sprinter.

“She’s just going to continue to get better and stronger,” Grey said. “She had a great year last year for us, and we’re excited for this year. Whatever Mollee puts her mind to, she can do.”

Conlan’s signing comes a day after Tech landed former Bulldog Brianna O’Mara, a 2015 graduate. Kughn said he also signed Butte High seniors Morgan McClernan and Hailey Pack, though those two did not have ceremonies in front of the media.

Pack is a transfer from Twin Bridges who is expected to bring a lot to Butte High in the weights this spring.

Kughn said he likes to be able to sign local athletes, but that is not the only thing that put Conlan on his radar.

“It always helps having someone local,” the coach said. “We don’t have to sell her on Butte. She’s a Butte girl, through and through. And I think most importantly, she’s a track girl. She’s fast.’

Conlan, the daughter of Keli (Hepola) and Jeremy Conlan, said she is looking forward to competing for the Orediggers.