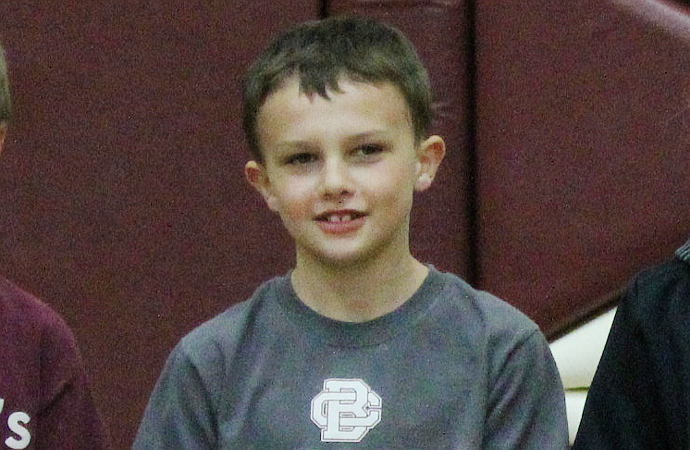 DILLON — Butte’s Cade Kelly will represent the Mining City and Elks Lodge No. 240 in the Montana State Elks Hoop Shoot.

Kelly qualified for the shoot, which is Feb. 3 in Livingston, by winning the boys’8-9 division at the Montana South District Elks Hoops Shoot Saturday at the Straugh Gymnasium.

Kelly was one of four Butte shooters to place in the top three of his or her age group, but he was the only one to move on. He sank 20 out of 25 free throws to beat his nearest competitor by eight shots. He bested the third-place shooter by 15.

Butte’s Doug Peoples made 20 shots and placed second in the boys’ 12-13 division. He finished two shots behind Bo Kelley of Ennis.

In the boys’ 11-12 division, Butte’s Ryan Peoples placed third with 14 makes. Kyler Engellant of Dillon won that division by making 24 out of 25 shots. That was the best score of the day.

Butte’s Brooke Badovinac placed second in the girls’ 12-13 age group. She made 17 shots and then beat Harrison’s Dana Lerum in a playoff by making 4 out 5 shots.

Parker Layng of Boulder made 15 shots to win the girls’ 8-9 division, while Sara Spring of Deer Lodge captured first place in the girls’ 10-11 group with 13 makes.

Trophies were awarded to the top two finishers in each age group.

Each contestant who participated Saturday was crowned champion in his or her age group at the local contests late last year. The district is comprised of Anaconda (Lodge No. 239), Butte, Deer Lodge (No. 1737), Dillon (No. 1554) and Helena (No. 193.)

Montana state champions will advance to the Regional contest March 10 in Rapid City, South Dakota. The National Finals are April 21 in Chicago.

The names of all the national winners are engraved on plaques at the Naismith Memorial Basketball Hall of Fame in Springfield, Massachusetts.

This program is totally sponsored by the Benevolent and Protective Order of Elks of the U.S.A. It is endorsed by hundreds of school systems around the country. The Elks fund the program primarily through its National Foundation and the support of the local lodges and state associations.

The Elks Hoop Shoot began as a local program by Corvallis Oregon Elks in 1946, is in its 47th year of national competition. More than three million boys and girls are expected to participate this year.

In the past, Montana has crowned several National Champions.