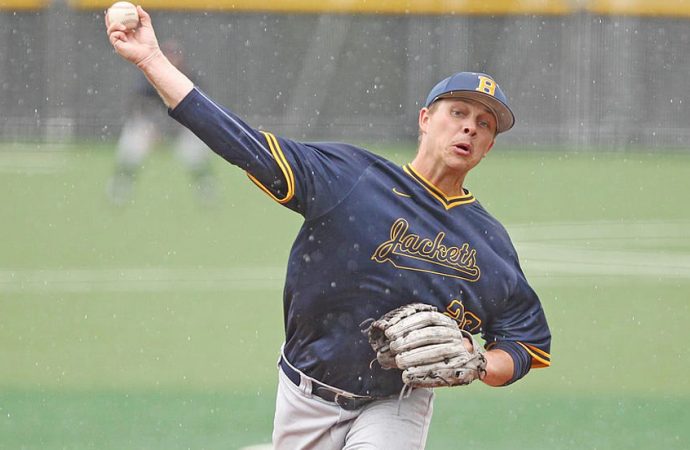 MSU-Billings Senior Bryon Baker delivers a pitch in a loser-out game against Northwest Nazarene at the 2017 GNAC Tournament in Portland, Oregon. (MSUB photo)

The Butte High graduate, however, clearly made a strong impression with the Yellowjackets.

The school released its All-Decade Team for baseball this week, and Baker earned a spot as a reserve pitcher.

Baker, a former Butte Miner, pitched form 2013 through 2017 for the Yellowjackets. He overcame injuries to become an all-conference pitcher. He pitched on two conference championship teams and was on teams that qualified for the conference tournament four times.

A likely candidate for the MLB Draft if he didn’t reinjure his surgically-repaired right arm during his senior season, Baker pitched through pain to help his teammates make a GNAC Tournament run in 2017.

“Bryon is a guy that fought injury his entire career as a pitcher for the Yellowjackets,” said Rob Bishop, the Yellowjackets head coach from 2013 through 2016. “When he was healthy Bryon was as dominant on the mound as anyone in the GNAC. A fearless competitor with great stuff. Bryon’s toughness brought a lot to our pitching staff whether he was on the field or in the dugout.”

Aaron Sutton, Baker’s coach in 2017, called Baker “the guy everyone on the team wanted to have the ball when the game was on the line. Truly developed into the leader of our ballclub his senior season and helped us with the transition in year one.”

Baker is currently a living in Butte and working construction.

Click here for more on the MSUB All-Decade team.