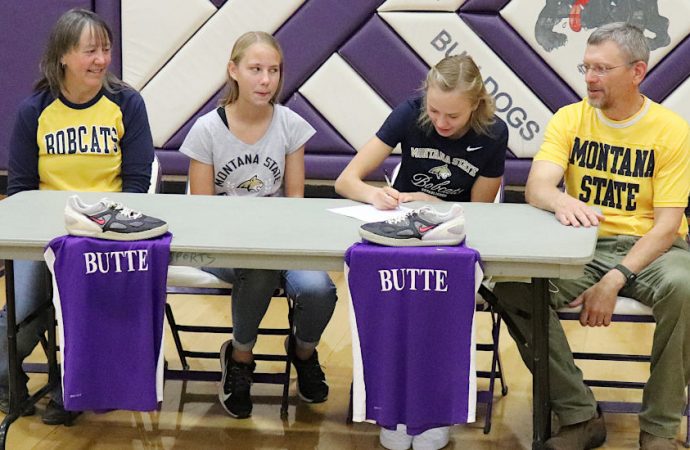 Butte High senior Anna Trudnowski signs to run track at Montana State University Wednesday afternoon at Butte High's Richardson Gym. She is sitting next to her sister Sonya and between her parents Diana and Dan.

Anna Trudnowski just might be a silver lining of the pandemic for the Montana State University track team.

The Butte High senior signed a National Letter of Intent to compete for the Bobcats Wednesday afternoon at Butte High’s Richardson Gym.

The signing came on the first day of the NCAA’s initial signing period, and Butte High track coach Arie Grey said his alma mater is getting a bargain thanks to the pandemic completely wiping out Trudnowski’s junior track season.

“That’s why I really feel like they are getting a steal here,” Grey said. “There would have been quite a bit of competition for her if she would have had that junior year.”

Even without the lost season, Trudnowski has an incredible résumé with the Bulldogs.

As a sophomore in 2019, Trudnowski competed in six events for the Bulldogs at the Class AA State meet in Kalispell. Most notably, she placed second in the high jump.

While she took the silver based on jumps, she was actually part of a five-way tie for the top spot after clearing a personal-record 5 feet, 5 inches. She tied with Madison Boles, the champion of Kalispell Flathead, Bozeman’s Delaney Bahn and Hannah Schonohoff and Missoula Hellgate’s Giliian Sherrill.

“Her sophomore year at the state track meet, she was a part of one of the greatest high jump competitions of all time,” Grey said.

That year, Trudnowski also placed fifth in the 300-meter hurdles while competing in the 100-meter hurdles, the 400, the triple jump and the 1,600-meter relay.

As a freshman, Trudnowski cleared 5-3 to place fifth in the high jump at the Class AA State meet in Great Falls. She also competed in the 400.

“I’m really thankful I was able to sign to MSU,” Trudnowski said after signing while sitting next to her younger sister Sonya and between her parents Diana and Dan. “It’s a really, really good program.”

While she looked at the University of Montana and some smaller school in the state, Trudnowski’s heart was always set on MSU.

“I knew I wanted to stay in Montana,” she said. “I really do love Montana, and MSU I think had a perfect combination of a Division I athletic team with great academic programs. And it’s pretty close to home.”

A 4.0 student, Trudnowski said she is not sure what degree she will purse just yet. She just knows it will be the seventh Montana State degree in the family. Her father and brother Jake both have two degrees from the school. Her mother and her brother Tony, who went on to a solid basketball career with Montana Tech after helping lead Butte High to the 2004 Class AA State championship basketball game, each have one.

Trudnowski said the Bobcats recruited her based on her record with the Bulldogs and an appearance at a camp one summer. She did not work out with the team before deciding to sign with Bobcats in recent weeks.

She met the coaches on a Zoom call.

“I never really got to meet them in person or meet the team,” Trudnowski said. “I was really looking at all my options and I really did feel set at MSU. I didn’t really feel the need to look at other schools after I had my Zoom call with them.”

Trudnowski said MSU is looking at her primarily as a high jumper. The team, though, is looking at all its options. Grey said he thinks that is a good idea. 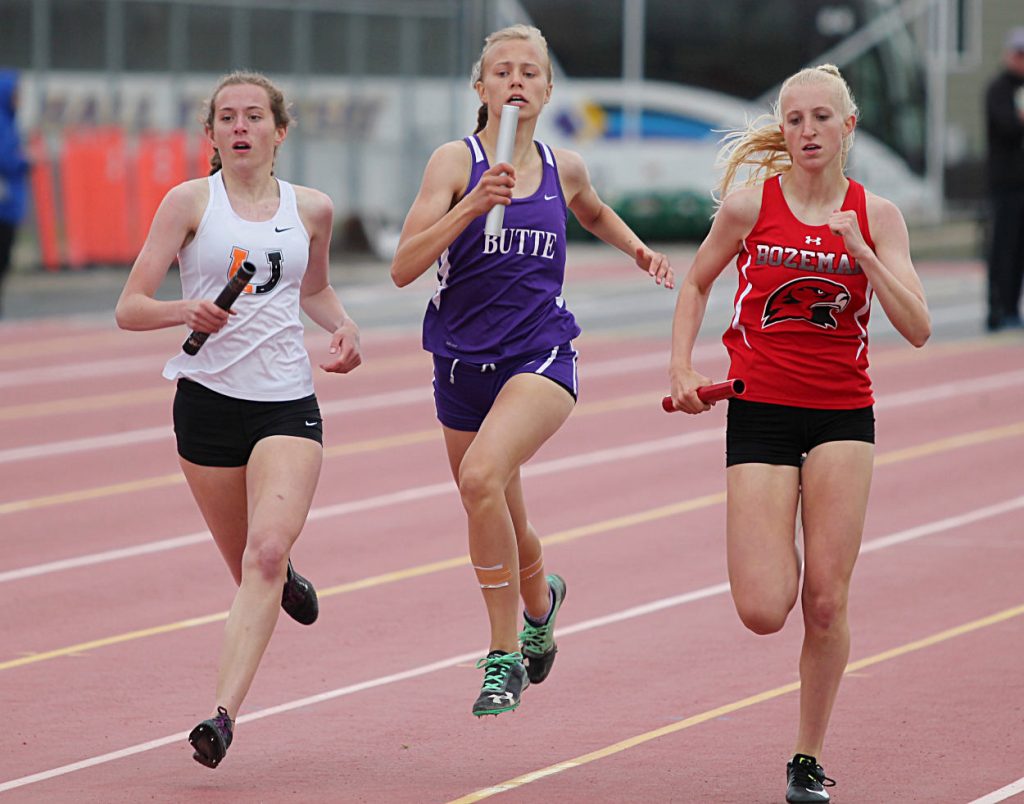 Bulldog Anna Trudnowski runs between runners from Billings Senior and Bozeman in the 1,600-meter relay May 19, 2018 in Butte. (Butte Sports file photo)

“She’s pretty talented, and the range that she has on the track is pretty impressive,” Grey said. “She can be a jumper, she can be a sprinter, she can be a hurdler. She’s going to be great for relays.

“She amazes me every day in practice. Unbelievable energy,” Grey said. “She amazing me at every meet with what she does. She is just a true competitor. We’re lucky to have her. I’m fortunate that I get to be along for the ride and watch her compete.”

Trudnowski is looking forward to being able to compete again. Her only competition since the pandemic lockdown began was the Big Sky State games in Billings. She had to bring her own tarp to put it on the high jump pad before each jump.

She said she “surprised herself” by clearing 5-4.

“The last time I got to high jump was this summer,” Trudnowski said. “There was a meet, but I didn’t get any practice before then.”

As a senior, Trudnowski will no longer have the pressure to choose a school on her back, and she is planning on putting her 5-5 mark behind her.