Maureen Porter poses for a photo outside of Synesis7 Corporation Friday morning in Butte.

Maureen Porter said she was in a “funk” following her five years of service in the Marine Corps.

Finding Xsports4vets helped change all that

Founded in 2010, Xsports4vets is a volunteer-run organization that bills itself as being “Dedicated to helping our nation’s heroes through extreme sports.”

You can count Porter, a Havre native who moved to the Mining City a couple of years ago, as one who says the organization definitely lives up to that billing.

“The idea of doing extreme sports and the events that they had appealed to me right away,” said Porter, who first participated in the program in 2011. “And it’s free.”

“Some of us have obvious wounds left over from combat, others don’t — but we all benefit from getting out and meeting people that have been in our shoes,” the organization says on its mission statement.

Porter said the organization is about more than extreme activities.

“They kind of check up with you,” she said. “A lot of us veterans are not really finding our place, not really happy, not finding purpose. When you show up, you take a little questionnaire on how you’re doing. Then they do it again at the end of the event.

“It was a good check in,” Porter said of her first Xsports4vets outing. “Then you get to meet other veterans who you can get some camaraderie with and get some friends.” 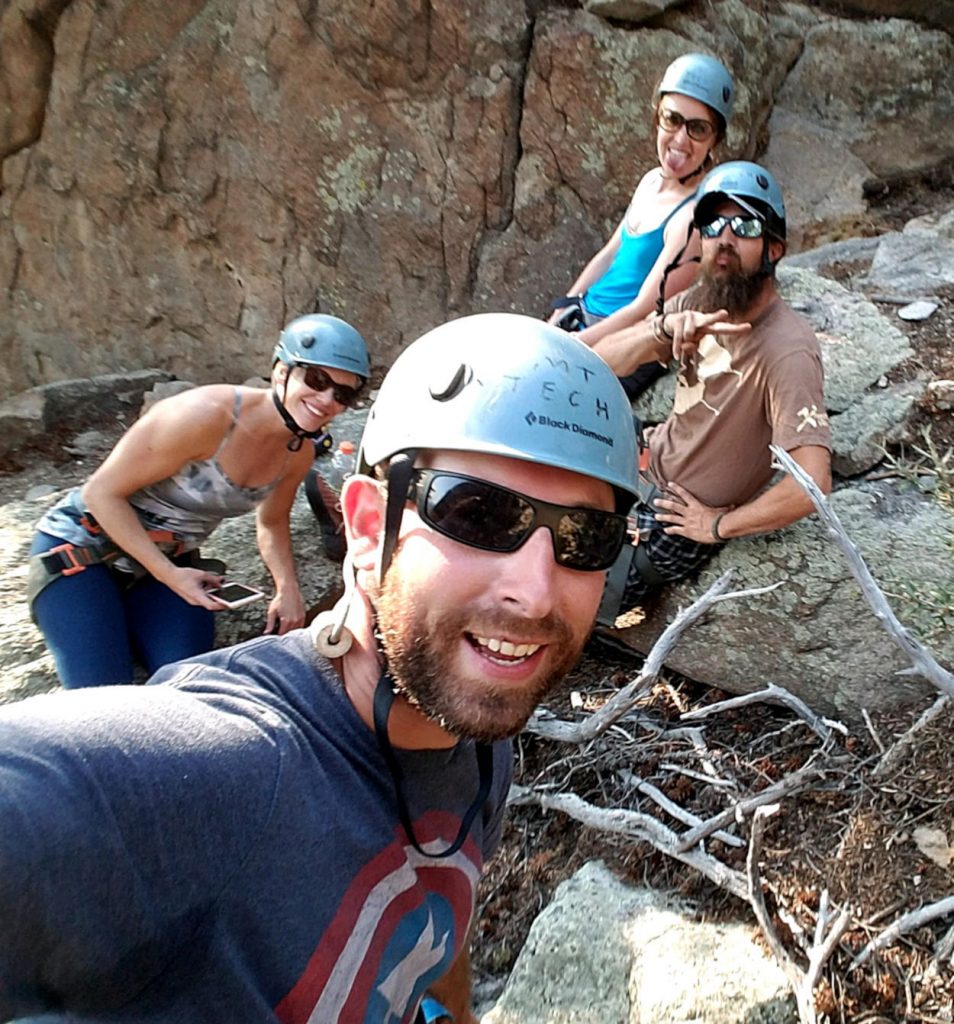 Maureen Porter, far left, is shown with some fellow clokbers at a Xsports4vets event last summer. Her partners are, front to back, Jeremiah Mercer, Jesse Scollin and Janna Sherrill. Like Porter, Mercer and Scollin are military veterans. Sherrill is the founder of Xsports4vets. (Courtesy photo)

The group had to cancel a hang gliding event set for Southwestern Montana this weekend because of the weather, but Xsports4vets still has a busy summer in store.

The next event is rock climbing the King and Queen of Pipestone. That will be July 5 and 6, and Instruction and equipment will be provided by Rod Alne and Penny Jones of The Peak.

A Highlands backpacking expedition is set for July 21-22, mountain biking in Thompson Park is Aug. 4, and a horsemanship class is set for Aug. 25.

Also, the Rotary’s Rink 2 Ridge Run in Butte on July 21 is a fundraiser for Xsports4vets put on by the Butte Rotary Club.

Each of those events give local veterans another opportunity to meet people who also know the struggles of fitting into society following years living on the edge in the military.

Porter graduated from Havre High School in 2002 and passed up a college swimming scholarship to server her country. She talked with recruiters from the other branches of the military, but she said she was called to the Marines.

“It was the challenge. It was different than all the other services,” Porter said. “The Marine Corps just really appealed to me right way.”

She was sent to Parris Island in South Carolina for training.

“It was rough, but I was in good shape coming off of playing a bunch of sports,” said Porter, who also ran track and cross country for the Blue Ponies. “The hiking was probably the hardest. You’re just walking fast on a flat surface basically.”

Porter reached the rank of sergeant (E-5) in the Marines. She served two tours in Iraq, where she worked on gathering intelligence. Her second stint, which stretched from 2005 to 2006, was on a small base near the Syrian border.

“Most of what we did was target high-value individuals,” she said. “Sometimes it was hard to figure out who the heck they were, what their name was, and what they were going by.”

Life on any military base in Iraq is dangerous and stressful.

“We did get mortared a couple of times, so we were always in flaks walking around the base,” Porter said. “The most dangerous part was flying in and out.”

After leaving the Marines, Porter returned to Montana. Her family now resides in Hamilton. She eventually used the GI Bill to go to the University of Montana in Missoula, where she earned a degree in political science and a master’s degree in business.

She said felt like she was an old 25 when she started at UM.

“As an non-traditional student you don’t have anything,” Porter said. “You don’t really fit in. I didn’t. Plus you just work different than most people.

“I think all of us go through that,” she said. “There’s a time when you think that (the military) is the only place you fit in. That’s all you know. That’s what I did. You go in right out of high school, and you learn that way of life.”

That’s where Xsports4vets came in.

“It helped me get some more friends,” Porter said. “It got me out of the house.” 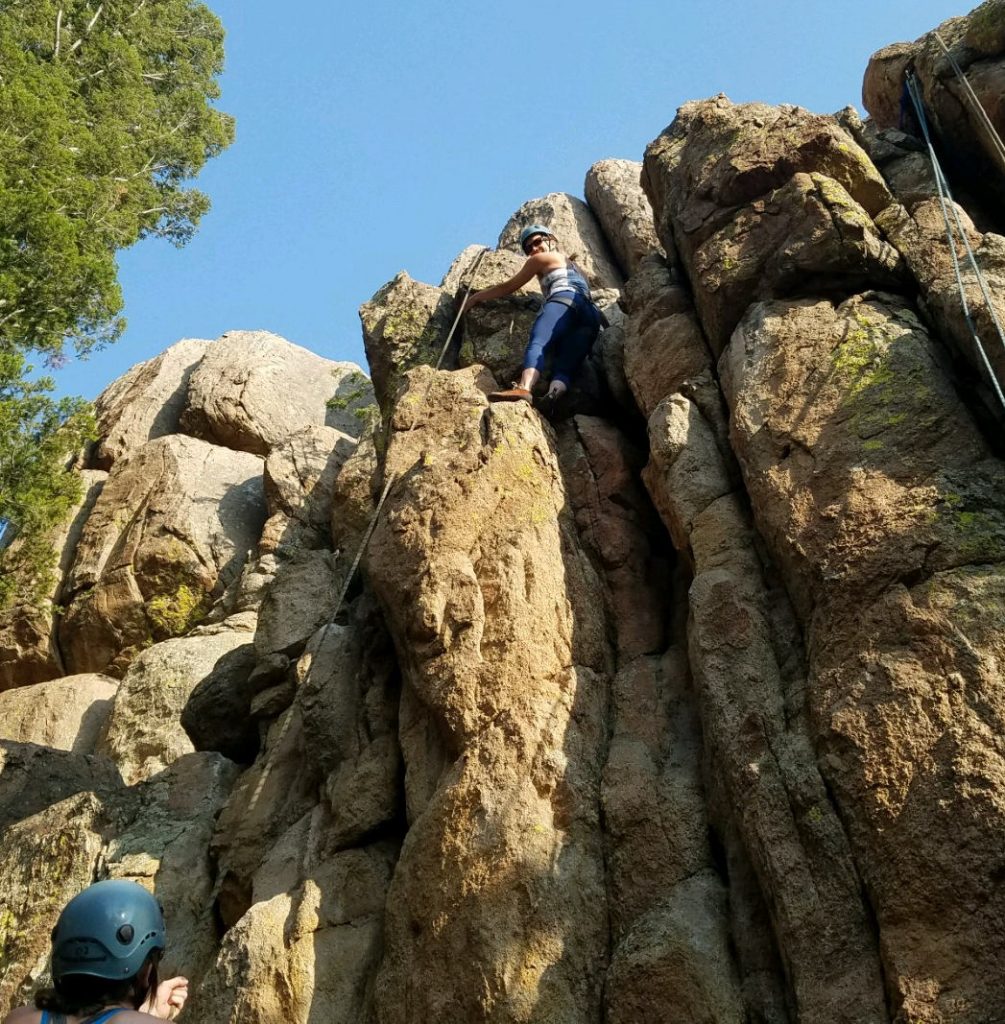 She said as of last year the Missoula-based non-profit had more than 1,000 veterans participate. That, she said, is a conservative estimate.

The grassroots organization is growing in Butte, too. Just four veterans from Butte participated in the rock climbing last summer, but 35 people signed up for the hang gliding that had to be canceled.

Xsports4vets is also planning events for this summer in Missoula. Those include power hang gliding out of the Polson airport and weekly river boarding on the Alberton Gorge.

All events are free to veterans with proof of deployment to an area of imminent danger. Some are also open to family members.

One of Porter’s first Xsports4vets events was whitewater rafting the Locsha River in the mountains of north central Idaho.

“It was intense,” she said. “Usually they do it in May so it’s high water. Every single wave we thought we were going to die. We were all screaming. It’s a great event.

“The year I went there were seven boats,” Porter said. “One or two of them (flipped over). They had some swimmers. I didn’t swim that year.”

Porter said partaking in events like that and meeting other veterans helped her transition back to civilian life.

“You change a lot to become military-like and have that mentality and have that drive,” she said. “You try to get back in the civilian world, try to be friends with civilian people and just be away from that kind of craziness, I guess. It was a big switch both ways.”

Porter was not wounded physically during her tours in Iraq, but every veteran returns home with some kind of scars.

“Everybody has, to different degrees, kind of stress injuries,” she said. “Being a female in the military is hard. Carrying packs and wearing flaks is hard. My back is much worse than most normal 34 year olds. It’s from of carrying that gear on a small frame.”

Porter moved to Butte two years ago to work as a loan officer for Headwaters RC&D. She was since recruited to work for Synesis7 Corporation by company founder and CEO Allen Ellmaker.

At Synesis7, which is a growing technology, data services and solutions company, Porter serves as a senior analyst and project manager of business, marketing and operations integration.

She fits in well in the Mining City, and she works out regularly at Kinetic Fitness.

Now, Porter would like to see more veterans in her new community take advantage of all that Xsports4vets has to offer.

“If we can get one vet out of each flyer, that’s good,” she said.

Porter said she isn’t worried about the numbers. She would just like for the events to have an impact on those who show up like it did for her.

“We’re not looking for a huge group,” she said. “As long as they get help from it. As long as they meet a couple of vets and they get to go do events that are going to help them recover and re-acclimatize into life here.”

“I was helped by the program, for sure,” Porter said. “Just being able to do those events helped me get out of the funk. For many of us it takes years to get out of it and get past anxiety and depression and things like that. I want us to have more people in Butte in the program.

“We know there’s a lot of vets in Butte.”