As an eighth grader, Skyler Criscuolo thought working as an umpire seemed like a pretty good alternative to detention.

That option, Criscuolo says, was presented to him by then East Middle School Vice Principal Keith Miller.

“I got sent down to his office a couple of days in a row for talking,” Criscuolo said. “The same teacher sent me down. My English teacher. Instead of giving me detention, he told me, ‘Why don’t you come umpire a couple of games for me. I won’t give you detention, and you can have a snack out of the concession stand.’

“I picked umpiring instead of detention.”

That’s how Criscuolo, now 27, got into the game of umpiring baseball and softball.

In August, that game will take Criscuolo to San Bernardino, California, to umpire the Little League Baseball Western Regional Tournament. Criscuolo was notified this week that he was selected as a volunteer umpire for the tournament that is one step below the Little League World Series.

“I’m excited about it,” Criscuolo said of working the tournament, which is set for Aug. 2-11.

Miller is now the principal at East. He is also the district administrator for Montana’s Little League District 2. Miller, who denies letting Criscuolo off the hook for talking in English class, nominated Criscuolo for the honor.

Miller said he admires the drive that pushes Criscuolo to be a great umpire.

“He was on the cusp of going (to the regional tournament) as a player,” Miller said. “It’s cool to see he has the same ambition as an umpire.

“But he served the detention.” 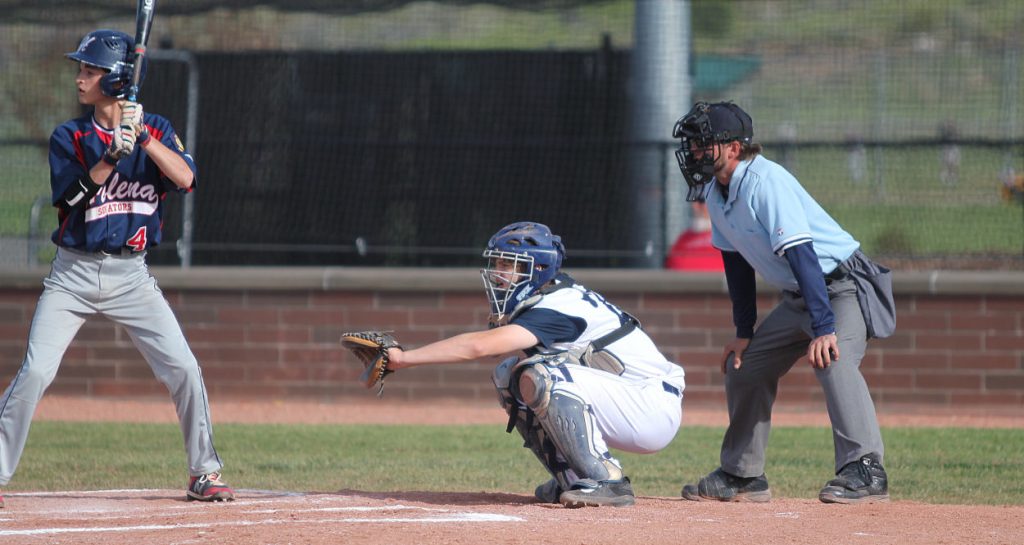 Skyler Criscuolo works behind the plate during a June 13 game between the Butte Muckers and the Helena Reps at 3 Legend Stadium. (Bill Foley photo)

Criscuolo took to umpiring right away, and Miller knew he was a good one from the start.

Early in his career in blue, Criscuolo worked a 9-10 All-Star tournament. A coach erupted at Criscuolo and his fellow teenage umpire after a critical call in extra innings of one game. Criscuolo handled the angry coach in a calm, cool and collected manner.

“Skyler was a lot more of an adult than the adult,” Miller said. “That’s when I said, ‘You’re pretty good at this. You have the right temperament.’”

More than a decade after beginning his umpiring career, today Criscuolo is the umpire-in-chief for Butte’s Little League Baseball. He is in charge of all umpires, and he umpires himself for no pay.

For the past five years, he has also served as an umpire during American Legion baseball games.

As a player, Criscuolo excelled in the Longfellow Little League before playing three seasons for the Butte Miners from 2008-10. He started the 2008 season with the Muckers before being promoted to the Miners, where he played the outfield and then second base.

Criscuolo also competed in football, basketball, wrestling and track before graduating from Butte High in 2010.

In addition to working full time at Harrington Surgical Supply in Butte, Criscuolo has also found time to coach several seasons when the league was in dire need for coaches.

It is an umpire’s uniform, though, where Criscuolo really excels. Miller, who also began his umpiring career at a young age, said Criscuolo is a natural.

“Skyler gets the big picture,” Miller said. “He puts the same effort into a Little League Baseball game that he does for a Legion game. He knows it means so much to the kids. He’s a 110 percent guy. He’d done well for himself. The kids love him.”

Other umpires are apparently quite fond of him, too. Criscuolo’s selection for the regional tournament comes after he participated in the Adult Umpire Academy last February and March in San Bernardino. He also umpired the Senior Softball Western Regional Tournament last summer in Missoula.

“He’s a person you can approach. That makes him a great umpire,” Miller said. “He’s not out there to be the show. He’s there to do his job.

“You can tell that they saw something in Skyler when he was down at the school and at regionals.”

Umpiring has become such a part of Criscuolo’s life that he is considering going to the Umpire Training Academy in Florida in January of 2020. That is where major league umpires get their start.

“It’s been more of a thought the last two years,” Criscuolo said.

Criscuolo will become one of just 10 Montana umpires to work the Western Regional tournament. He will become the second from the Mining City. Miller was the first. He worked the tournament in 1993.

During the 2019 season, Criscuolo will umpire as usual while undergoing more training. He will also instruct.

Along with Missoula umpire Duane Meiers, who worked the tournament in San Bernardino last summer, Criscuolo will host the Western Regional Umpire Clinic April 12-14 at, of all places, East Middle School, where his excessive talking led to his umpire beginning.

And it won’t require getting booted from English class.