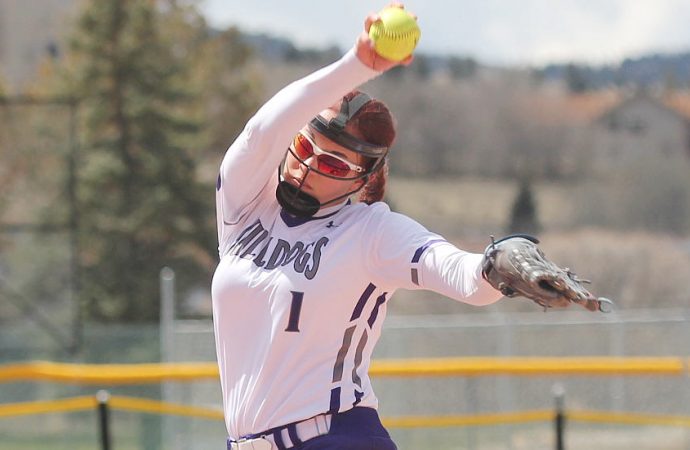 As we make our way through another sports-free Saturday, we thought we would take a look back at this day in the history of ButteSports.com, which went online in August of 2012.

The date April 11 has been a strong one for Butte athletes over the past eight years. Butte has seen big performances all across the spring sports spectrum — tack, tennis, softball and baseball.

The biggest of those came two years ago when Butte High senior pitcher Kaidy McClafferty dominated the defending Class A state champion Belgrade Panthers in Belgrade.

Belgrade’s coach was wondering what happened to his powerful lineup after his team fell 3-0.

In rolling her record to 3-0 on the season, McClafferty struck out 12 batters and scattered five hits. All but a double by Belgrade’s Katie Hoppe were singles.

Brianne Ossello went 2 for 4 with a double to lead the Bulldogs. Taylor Huff poked a pair of singles. Jenna Maroney, Kennedy Ferriter, Brittney Tierney and Madison Joseph also singled for the Bulldogs in that win.

The next month, the Panthers defended their Class A state title.

McClafferty is currently a sophomore on the NCAA Division II Bemidji State softball team. The Beavers were 10-12 overall and looking forward to beginning Northern Sun Intercollegiate Conference play when the season was called off because of the coronavirus pandemic.

Derek Ralph, Northey Tretheway and Kale Guldseth won singles matches that proved to be the difference for the Maroons. Kolten Lamioux and Kaden Peeples won at No. 2 singles, while Patrick Kenney and Tyler Trudnowski grabbed a win at No. 3 doubles.

On this day in 2015, which was a Saturday, Butte High senior Dalton Daum won the 100- and 200-meter races at a quadrangular against Bozeman, Helena High and Helena Capital in Vigilante Stadium in Helena.

Daum went on to defend his state titles in both events. He repeated as the Montana Gatorade Montana Boys’ Track and Field Athlete of the Year.

On the same day that Daum showed his great 2014 season was not a fluke, Butte Central graduate Sean “Diesel” Ferriter posted a personal-best mark while winning the hammer throw at the Wildcat Open hosted by Weber State in Ogden Utah.

The Montana State senior won the meet with a mark of 210 feet, 4 inches. Bobcat teammate Zach Sharp placed a distant second at 176-02.

Later that season, Ferriter placed seventh in the NCAA West Regional meet in Austin Texas with a mark of 210-8. That sent Ferriter to Eugene Oregon for the NCAA National Outdoor Track and Field Championships.

Also on April 11, 2015, Butte native Bryon Baker returned to the mound to pitch for MSU-Billings. Baker, who was pitching through a shoulder injury, threw an inning and two thirds in relief in the opening game of a doubleheader with Central Washington in Billings.

The Yellowjackets swept the doubleheader, winning 21-8 and 10-9. Baker gave up three hits and two unearned runs. He struck out two of the nine batters he faced.

Teammate Brody Miller, who has deep Mining City roots, had a monster day. Miller hit two home runs, including a grand slam, to lead the Yellowjackets in the sweep.

Two years later, Baker completed his career, again pitching through a shoulder injury that ended what could have been a professional career.

On Monday, April 11, 2016, Butte High graduate Hailey Hoagland fired a 75 and a 76 to lead the University of Montana at the Bobcat Spring Invitational in Goodyear, Arizona.

The next day, Hoagland shot an 80 and tied for 18th place.

April 11, 2020 will go down as yet another boring sports day in Butte and the rest of the country. On Thursday, the Montana High School Association announced that the suspension of the spring season because of the COVID-19 pandemic has been extended through April 24.

If Montana students cannot return to in-person instruction by May 4, the season will be a total loss.