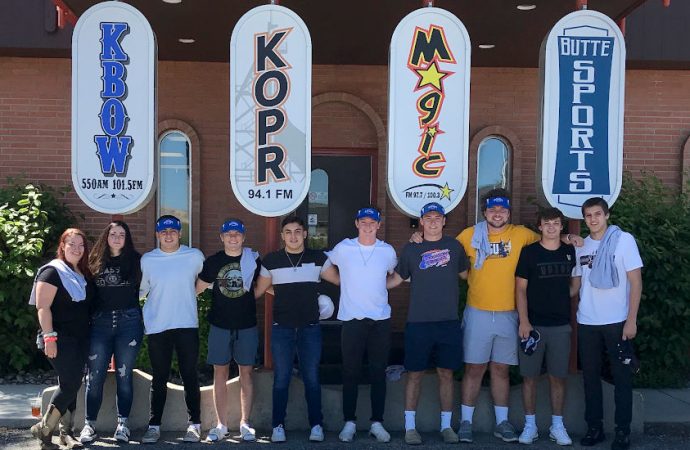 Kameron Moreno wants you to sign up for next month’s cornhole tournament that will benefit the Shriners Hospital for Children in Spokane.

He just wants you to know that you will be playing for second if you do.

Moreno is planning on winning.

“Yeah, I’m pretty good,” the quick-witted Moreno said Tuesday at a tournament planning meeting at the Butte Broadcasting Inc. studios. “I’m going to play with my buddy Ty Raiha. I haven’t lost with him in the last month.”

The event will be held Saturday, July 18 at Copper Mountain Park, and all proceeds will go to the hospital.

The tournament was the brainchild of former Butte High quarterback Tommy Mellott. He came up with the idea after hearing the 2020 Montana East-West Shrine Game was called off because of the COVID-19 pandemic.

Mellott and the other Butte players and cheerleaders picked for the game have been busy since. They are trying to raise money as a way to ease the blow the hospital will take because the game was canceled for the first time since it began in 1947.

Butte High cheerleaders Madi Bailey and Larissa Bento are also involved in the planning and work, as is Bulldog head coach Arie Grey, who was selected to coach the West Side this summer.

“It’s just good that we can give them something instead of them getting nothing for the year,” McGree said.

Mellott said the goal from the tournament is to raise $10,000, but that is just the start.

“We already raised $3,000,” the future Montana State Bobcat said. “The Dennis and Phyllis Washington Foundation is going to match up to $10,000. We’re trying to get other businesses to match the money we raise.”

The entry fee is $100 for a two-person team, and that includes free food, two drink tickets, games and fun. The entry deadline is July 13.

The tournament begins at 12:30 p.m. on the day the 74th Shrine Game was supposed to be played in Billings.

In addition to cornhole, a silent auction will be held, prizes will be awarded, and a dunking booth will set up. A full bar will be available.

Mellott said the event will include several safety precautions because of the coronavirus.

“I contacted A-1 Ambulance, and they are getting us latex gloves and masks,” Mellott said. “Headframe Spirits is getting us hand sanitizer and disinfectant spray.”

The tournament will be capped at 50 two-person teams, and 21 teams had already signed up as of Tuesday. For more information, contact Dina Mellott at 498-8588 or Jackie Neumann at 491-1582.

Some of the players and cheerleaders will be guests on the KBOW sports radio show “Overtime” Wednesday night. That will include Kobe Moreno, who disputes his brother’s victory prediction. Kobe is playing with his cousin Jordan Tracy, and he, too, plans on winning.

Not all the former Bulldogs and Maroons are as confident in their cornhole ability as the Moreno brothers.

“The only rule we have is if you don’t score a point, you have to sit under a designated table,” Richards said.

“If you get skunked,” McGree added.

“You have to be pretty bad to get skunked,” Richards said.

Mellott was surprised to hear some of the players selected for the Shrine Game were going to play in the tournament because there is also a lot of work for them all to do on the day.

“I don’t even know if we’re allowed to play,” Mellott said, looking at Kobe Moreno. “Did you sign up?”