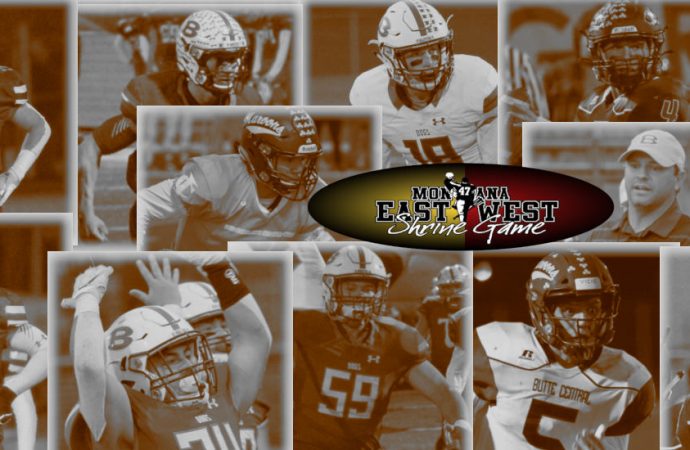 The rosters for the 74th Montana East-West Shrine Game were announced Christmas morning.

Eight players from the Mining City made the West roster for the all-star football game. Three more were selected as alternates.

Butte High’s Lucas Kingston and Quinn Sullivan and BC’s Trevor Neumann were named as alternates. (Click here to see all the selections.)

Arie Grey of Butte High will serve as the head coach of the West Team. Grey is a Deer Lodge native who spent his college career as a speedster for the Montana State Bobcats. He also played in the 1997 Shrine Game and has coached this game two other times, once as an assistant and as head coach in 2013.

Grey recently completed his 12th season as head coach of the Bulldogs. He led the team to the Class AA state title in 2012, and his Bulldogs finished runners up this past season.

Allen is listed at 5-foot-9, 150 pounds, though he is wrestling for the Bulldogs at 138 pounds. The safety led the Bulldogs defense with 106 tackles. His signature play came when he raced across the field and forced a Billings West fumble inside the 1-yard line in a semifinal game at Naranche Stadium.

McClafferty, a 6-7, 230-pound offensive lineman, played left tackle for the Bulldogs. He protected the quarterback’s blind side and helped pave the way as Butte High ran for more than 3,000 yards.

The 6-1, 190-pound Mellott was named the Class AA Offensive MVP and took home the 2019-20 Gatorade Montana Football Player of the Year award. The future Montana State Bobcat accounted for 46 touchdowns and more than 4,000 yards as a senior.

Kameron Moreno, a 5-9, 200-pound running back, made the team after rushing for 1,307 yards and 20 touchdowns as a senior. He is also a receiving threat out of the backfield.

Kobe Moreno, a 5-8, 200-pound inside linebacker, will play defense for the Bulldogs. Despite recovering from an ACL tear that stole his junior season, Moreno racked up 48 tackles and four and a half sacks.

The 6-1, 195-pound McGree will play safety for the West Side. That comes after the future Carroll College Fighting Saint had a stellar season at quarterback, despite playing with a cast to protect his broken left hand for much of the season.

Ossello, a 6-4, 190-pound future Montana Grizzly, will play receiver for the West. As a senior, Ossello caught 39 passes for 698 yards and seven touchdowns. He also played quarterback one game.

Richards is a 6-4, 280-pound future MSU Bobcat. He will play offensive tackle for the Maroons after helping lead an offense that put up more than 3,500 yards.

The 6-2, 260-pound Kingston was a force on the inside of the Bulldog offensive line. He made the list as a guard.

Sullivan, a 6-foot, 180-pound jack of all trades, made the alternate list as an outside linebacker. He registered 71 tackles and three and a half sacks.

Neumann is a 5-11, 170-pound future Montana Tech Oredigger. He made the list as a receiver after grabbing 38 receptions for 741 yards and four touchdowns.

The East Team will be coached by John Fitzgerald of Red Lodge. Fitzgerald is a Columbus native who played for the Grizzlies as a member of their 2001 National championship team.

Fitzgerald played in the 1997 Shrine Game and started his coaching career in 2002 in Cut Bank. He’s currently head coach of the Red Lodge Rams (2004-2013 and 2017-2019), where he led his team to a semifinal finish this year. This is Fitzgerald’s first opportunity to coach in the shrine game.

The Montana Shrine Game is the premier all-star game in Montana and has a long history of distinguished players and coaches.  It is also the one of the oldest high school all-star football games in America.

Every year since 1947, Montana high schools’ finest players are selected to compete in a game to raise money and to help make the public aware of the expert orthopedic and burn care available at the Shriner’s Hospital for Children in Spokane, Washington.  Expert care is provided regardless of the family’s ability to pay.

In recent years, the Montana game has become the top Shrine Game in the nation for hospital donations. In the last 10 years this game has raised nearly $1 million. Forty of Montana’s finest are selected to compete on each team and two players from Calgary will join them, one for the East and one for the West.

These players were nominated by their schools and coaches across the state, and finally selected as the “best of the best” to participate in the 74th Montana Shrine Game. They join an elite fraternity of players, many of whom have gone on to distinguished collegiate and professional careers.