Cal McQueary is shown playing for the Idaho Matadors in this courtesy photo.

Cal McQueary is married to football.

For now, that is all the family 33-year-old Butte native needs as he lives, works and plays in Meridian, Idaho.

“I’ve got two dogs. I’m living the life,” McQueary said this week. “People ask me, ‘When are you going to get married?’ I’m like, ‘I’ve got football.’”

A business teacher at Meridian High School, McQueary is an assistant coach for the Warrior football team that plays in Idaho’s 5A, the largest prep league in the state. He’s served in some capacity on the Meridian staff the past four seasons. That came after he moved to the area to teach and coach at Columbia High School in Nampa.

This weekend, McQueary officially welcomes a new addition to his football family when he suits up for the inaugural game of the Idaho Horsemen of the American West Football Conference.

The indoor football season begins Saturday night as the Horsemen host the Wenatchee Valley Skyhawks at the Ford Idaho Center in Nampa.

“It will be pretty sweet when they get everything set up,” McQueary said of playing that game in a big arena renown for hosting the Snake River Stampede, one of the nation’s top rodeos.

Along with the Horsemen and Skyhawks of Wenatchee, Washington, the league will also consist of the Reno Express and the Tri-Cities Fire (from Kennewick, Washington) in its first season. The league plans to expand after the first season.

At 33, McQueary is one of the elder statesmen of the Horsemen, in a league that includes former NFL players.

In his case, McQueary said age has turned into wisdom and experience on the football field. He also says he doesn’t feel a day older than when he played his last football game for Montana Tech in the fall of 2008.

Actually, McQueary said he feels younger than his younger teammates.

“They’re complaining about their legs hurting,” he said, referring to the weeks of practice leading up to the first game. “I’m like, “I’m the one who should be complaining. I’m 33.’” 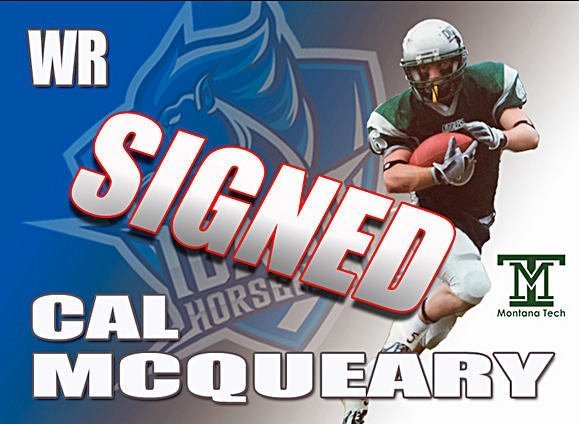 The Idaho Horsemen released this meme when announcing the signing of Cal McQueary in December.

Five years ago, McQueary tore his ACL, and he figured it would be the end of any hopes of playing football again.

Instead, the hard work put in during his recovery helped McQueary develop a better work ethic. It also fueled his desire to be better.

“My lifts and my times are way better than in college,” McQueary said.

McQueary will play receiver — a position he was known for at Butte High and Montana Tech — and wear No. 8 for the Horsemen.

Coincidentally, McQueary, who wore No. 6 for the Orediggers, is wearing the number his cousin Quinn wore as he played quarterback for Montana Tech from 2015 through 2017.

Quinn McQueary, who is nine years younger than Cal, is also holding onto his dream of playing pro football as a member of the Albay Empire of the Arena Football League. The Empire begin the 2019 season late next month.

The Arizona Hotshots of the Alliance of American Football drafted Quinn McQueary in the November quarterback draft. He went to camp with the team, getting cut just before the start of the season.

Like his cousin, Cal McQueary is operating with an eye on bigger things. In fact, he will miss the second and third games of the Horsemen season to participate in The Spring League 2019 in Austin, Texas.

The league, which runs March 29 through April 11, is run by the XFL, which will make its return next year. Representatives from the National Football League and Canadian Football League will also be there.

Those leagues showcase dreams for McQueary as he heads to Texas.

“That’d be pretty sweet,” McQueary said of possibly playing at an even higher level.

Back then, though, Montana Tech was not the place to go to put up gaudy receiving numbers. Former head coach Bob Green was only slightly joking when he referred to Tech as “Tailback U.”

Green’s Orediggers, first and foremost, were a running team. They also struggled with health and efficiency at the quarterback position in those days, so Oredigger fans never got a true sense of how good McQueary could be at receiver.

It wasn’t until McQueary was a senior in 2008 when the Orediggers opened up the offense under sophomore quarterback Matt Komack.

McQueary caught a career-high 34 passes for 354 yards that season.

When his playing days were done, McQueary coached under Green for the last two seasons the legendary coach roamed the sidelines. He also served as an “intern” during Chuck Morrell’s first season with Montana Tech in 2018.

Under Morrell, McQueary did a little bit of everything, including breaking down film so coaches and players had easier access. McQueary was in the coaches offices or on the practice field around the clock.

It was also a very enlightening time for McQueary to work under Morrell, who completed his eighth season last fall.

“I learned a ton of football being under him,” McQueary said. “I talk to him constantly about guys down here.”

While working the long hours as an assistant at Tech, McQueary was also completing his teaching certificate through online classes at Montana Western.

In November of 2011, he was hired to replace a retiring teacher at Butte High. The following year he moved to the Boise area.

Meridian is a suburb that bumps up against Boise. In fact, McQueary’s house is literally a block away from Boise.

“I came down here not knowing anybody and I love it,” McQueary said. “It’s a pretty sweet place.”

After a year in Idaho, McQueary decided to try out for and became a member of the Idaho Matadors of the semipro Rocky Mountain Football League. He played five years, without receiving a pay check.

For the Horsemen, McQueary will be paid $200 per game. There is also a $25 bonus for winning games to go along with bonuses for playoff wins and for a championship.

“It’s not much,” McQueary said, adding that he doesn’t play for the money.

The rules for the American West Football Conference are similar, but not identical, to the Arena League. The field is 50 yards from end zone to end zone and 28 yards wide. There is also a wall to be tackled into instead of a sideline.

“Going from the outdoor game to the indoor game is an adjustment,” McQueary said. “You’ve either got a guy or a wall right there.”

That is where McQueary figures his experience coaching, playing and breaking down film will come in handy.

“I’ve been playing mostly receiver, but I’ve been working at defensive back,” he said. “You can only suit up 21 guys, so you have to be prepared and ready to go.”

McQueary is also hoping his play can serve as an example for his Meridian High School players. Many of his Warriors will be there for home games. Some will serve as ball boys.

“They’re like ‘We’re going to critique you,’” McQueary said. “Good. I need to be critiqued.”

A 2004 Butte High graduate, McQueary was a senior on Butte High’s 2003 football team. Despite sending a handful of players to college to play football (including Colt Anderson), those Bulldogs went 0-9.

A decade and a half later, and McQueary is still using that season as motivation — for himself, and for his team.

McQueary never thought he would be using that season as personal motivation as a player so many years later.

“I never expected to play football after college,” McQueary said.

Now, McQueary can’t even begin to look at the end of the road playing football.

Oh, and McQueary will have more than his football family by his side as he makes his debut for the Idaho Horseman on Saturday.

His parents, Carl and Lynn, are making the trip from Butte to watch the game.