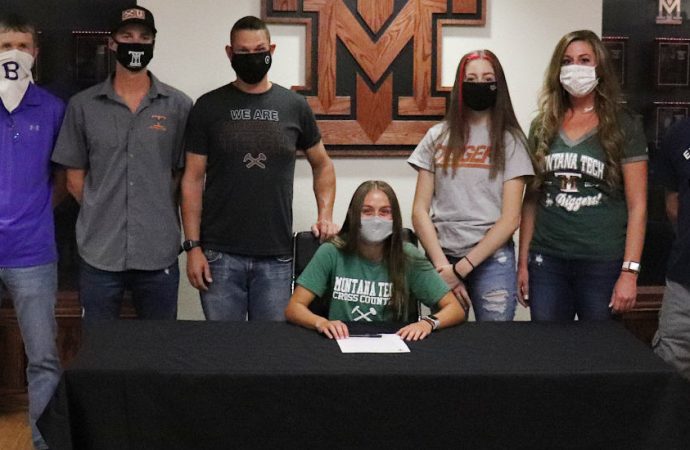 Hailey Nielson likes the idea of being a Butte runner.

That is what made Friday’s decision so easy. Neilson will be running cross country and competing in track in the Mining City for five more seasons.

Six days before she beings her senior season on the Butte High cross country team, Nielson signed to compete for Montana Tech.

Surrounded by her family and coaches, Nielson signed an NAIA National Letter of Intent to run for Montana Tech this afternoon in the Hall of Fame Lounge of the HPER Complex.

“A big part of it for me is staying in Butte because I feel like I can do a lot of things for running in Butte,” Nielson said. “The coolest part is you can drive 10 minutes and be out in the mountains and go running.”

Nielson ran cross country and track for the Bulldogs since her freshman season. She qualified for the state cross country meet three times.

Last fall, Nielson capped an injury-plagued season by placing 27th overall with a time of 20 minutes, 3 seconds in the 5-kilometer race.

Despite the injuries, Nielson still ran a faster time than her 20:17 at state as a sophomore.

Nielson also plans to run for the yet-to-be-announced Montana Tech track team. She earned all-conference honors in the 3,200 as a sophomore for the Bulldogs. That qualified for the Class AA State meet.

She was expecting even bigger things before the coronavirus pandemic canceled the spring season.

As impressive as Nielson has been, Kughn said that is only the beginning.

“I think my favorite is just her passion for the sport shines through,” Kughn said. “She’s an important part of the local community. She’s out there, and I think one of her big reasons for coming here is to continue that and the Butte running community.

“I think we share that passion with the boom of distance running in Butte. I think I can work with someone like that and take her to the high level.”

Nielson said she was considering other schools until the Orediggers officially announced they were adding cross country for the 2020-21 season.

“Once I found out that they added cross country and also track, I was super pumped,” she said. “They were pretty much my only choice.

Nielson, a 4.0 student at Butte High, said she is leaning toward majoring in biochemistry at Montana Tech.

The signing is the first of the season for the Orediggers, who were late in the game because of the timing of starting their program.

“It shows two things,” Kughn said of the early signing. “We’re serious about her, and she’s serious about us. That’s what we’re both probably looking for.”

The coach said the signing is a sign of good things to come for his second recruiting class at Montana Tech.