Butte High senior Kennedy Lean signs to play golf at Montana Tech Friday. She is sitting next to her mother Heather, who is holding her brother Kyler, and her father Coby. Standing behind Lean are her sister Kendyllen, brother Kellen and grandmother Gaye Godbout.

Recruiting Kennedy Lean to play golf at Montana Tech might have been the easiest thing Oredigger coach Sean Ryan has ever done.

On Friday afternoon, Lean made that perfect match official by signing an NAIA Letter of Intent in front of a small group of family, friends and coaches at the Tech Hall of Fame Room in the HPER Complex.

“When I was meeting with (Ryan), I pretty much knew I wanted to,” Lean said of signing with the Orediggers.

Lean did not even apply at any other schools. She said she is leaning toward majoring in business, but she reserves the right to change her mind.

“I just want to stay home,” she said. “Especially with the virus, I didn’t want to go anywhere else.” 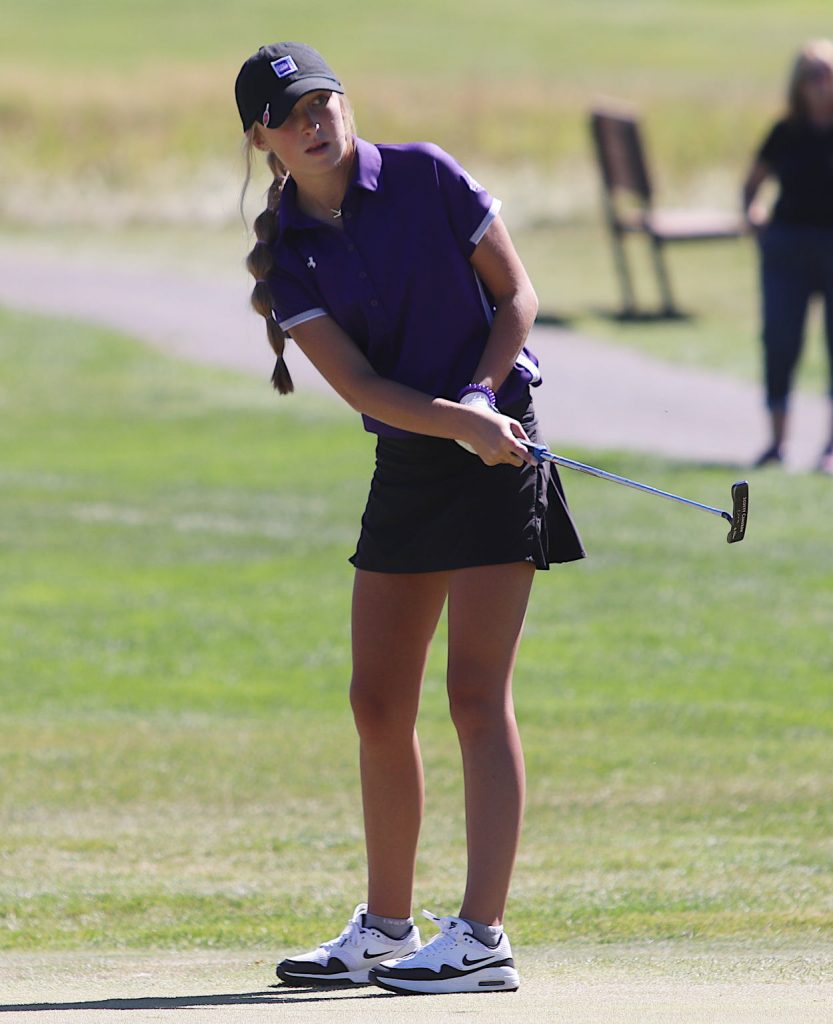 Kennedy Lean of Butte HIgh putts on No. 11 during a Sept. 10 tournament at Fairmont Hot Springs. (Butte Sports file photo)

That was perfect for Ryan, who took note of the success Butte High’s golf teams had in Lean’s four years. The four-year letter winner was part of teams that placed third at the Class AA State tournament in 2018 and 2019.

The Bulldogs placed fourth at state earlier this month in Missoula, one week after winning the inaugural Western AA Divisional title at Fairmont Hot Springs

“Kennedy had a really good year,” Ryan said. “She was on a really good team at Butte High, and that’s the kind of culture we’re trying to bring to the Tech women’s program. We’re trying to recruit players who have competed previously at a high level and bringing them in.”

While Lean has already helped hoist some trophies for the Bulldogs, her new coach thinks Lean’s best golf is still ahead of her.

“I think we’re just scratching the surface as where she can be as a golfer,” Ryan said.

The coach added that the difficult circumstances that came with playing through a pandemic showed a lot about the make up of his newest Oredigger. High school teams played one-day tournaments during the regular season. They did not get to hit range balls or warm up on the practice green.

Lean, an Academic All-State player, also plays tennis for the Bulldogs. She signed with her parents, Coby and Heather, sister Kendyllen, brothers Kyler and Kellen and grandmother Gaye Godbout surrounding her.