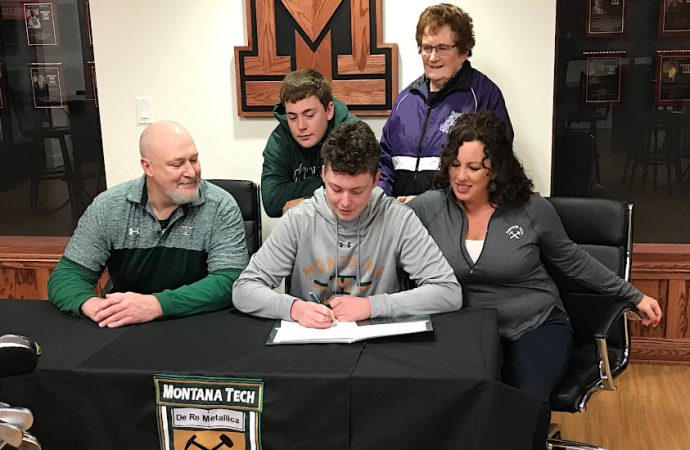 Butte High senior Kaven Noctor signs an NAIA National Letter of Intent to play golf at Montana Tech Wednesday morning. He is seated between his parents, Kevin Noctor and Katie Harding. His brother, Kendel, and grandmother, Willene Beavis, look on.

“He was a kid who you always saw at the golf course,” Ryan said. “It didn’t matter where I would go to play golf, you’d run into Kaven. He was playing somewhere. That drive and dedication really showed a lot.”

Now, Ryan will see even more of Noctor.

The Butte High senior signed an NAIA National Letter of Intent to play golf for Montana Tech Wednesday morning. Noctor made it official in a short ceremony surrounded by family at Montana Tech’s Hall of Fame Lounge.

Noctor, who is leaning toward studying business at Tech, said education was the No. 1 reason he chose his hometown school.

“I looked at a couple of others schools, like (MSU-Billings) and a couple of out-of-state schools, but Montana Tech I felt like was my best option,” Noctor said.

The signing comes after Noctor completed a decorated career at Butte High.

He tied for sixth place at the Class AA tournament in Great Falls this fall, earning All-State honors for the second straight season. He placed 10th at state as a junior.

Noctor, who represented Butte High at the state tournament all four seasons, also brought his game to the international level this past summer.

He won the 16-17 age group at the Montana State Junior Championships in Billings, earning him the right to represent the Treasure State in the Junior America’s Cup and the Montana-Alberta Junior Ryder Cup.

“Kaven was kind of always on the radar, especially after he played so well in the state junior tournament over in Billings last year,” Ryan said. “I was on hand to see him close out that tournament.”

Noctor was a free throw champion as a young boy, and he is a member of Butte High’s boys’ basketball team. Golf, though, has long been his favorite sport.

“I’ve been golfing kind of my whole life,” he said. “I think probably in sixth grade is when I really started to play a lot, like every day, pretty much.”

“I just love to practice golf,” Noctor said. “I was pretty much in love with it, practicing every day and just trying to get better every day.”

Ryan said Noctor is a part of a strong recruiting class. The full class will be released in the coming weeks, he said.

Getting some homegrown talent to be a part of that class is a big deal, Ryan said.

“It’s really important,” Ryan said. “I think it’s important for Montana Tech as a university and an athletic department to get the top-tier talent, especially when that talent is here in town. You’ve got to get the Butte kids, especially the kids of Kaven’s caliber. It will breed a lot of success for our program.”

Ryan said adding this class to Tech’s existing roster has him looking forward to exciting times for the Orediggers.

“The plan was to increase the competition among our own ranks so we can be more competitive among other conference teams,” Ryan said. “We won our first conference tournament in 10 years this fall, and the plan is to try to make that the norm and not once every 10 years.”

Noctor signed the Letter of Intent while sitting between his parents, Kevin Noctor and Katie Harding. His brother, Kendel, is a sixth grader at Emerson Elementary, and grandmother, Willene Beavis, looked over his shoulder.