The Bulldogs topped Helena Capital 38-31 in a rugged and spirited Western AA Conference high school wrestling dual meet Thursday night in the old Butte High gym. It was Butte High’s last home dual meet of the season, though the Bulldogs will be the host school for the Western AA Seeding Tournament slated for early next month in the Butte Civic Center.

Mason Christian’s 6-1 decision win at 205 pounds clinched the victory. It was Christian’s first bout in two weeks after suffering a knee sprain. His win gave the Bulldogs a 38-28 lead with only one match left to wrestle.

The finale pitted two of Montana’s best high school football linemen against each other as Capital’s Talon Marsh and Butte High’s Zach Tierney collided one more time. Marsh, the Gatorade Football Player of the Year in Montana, eked out a 4-3 decision.

Pre-meet, Butte High held Senior Parents Night festivities with the Bulldog crowd, a large one, given the chance to accord a thank-you applause to nine boys and nine girls in the program graduating this spring.

“This was a great night and a great win,” Butte High head coach Cory Johnston said. “Two of the top five teams in the Western AA competed. We will see a lot of them in the next two weeks.

The Bulldogs built a strong lead early before Capital wrestlers started flexing some muscle of their own. Keegan Hunt rallied from a point behind to apply a pin at 2 minutes, 29 seconds of his 103-pound bout over Mason Eblen to start the Butte High boys’ night.

Pins by Cashton Spolar at 120 pounds and Hunter Rahn at 126 knotted the score at 12-all. Pumnea broke the tie for Butte High with a second-period pin over Ayden Smelko at 132. Pumnea was dominant, building a 12-0 advantage before earning the fall.

A tough grind at 138 saw Boston Lay of the Bruins gain a 2-0 lead on Whitlock before the Butte High wrestler owned the third period. He pulled a reversal after starting the period on the bottom and turned Lay for a 4:35 pin. Butte High 145-pounder Hardesty, only a third-year wrestler, then added to it with a 3:50 pin at 145 over Jackson McMillian. Butte High’s lead was 29-12.

“Bryton Hardesty started wrestling as a sophomore,” Johnston said. “From where he was then to where he is now, he’s come many miles. He has high goals for the end of this year and is probably the hardest worker I have ever coached.”

Bulldog sophomore Will Stepan gave up a takedown to Dane Butler at the beginning of their 152-pounders’ contest, but rallied for a 5-2 lead on the way to a pin 3:10. Butte High had a 35-12 margin in the team score.

A major decision by Cole Graham at 160 pounds over Trey Hansen and then a pin by Connor Kovick over Jake Bailey cut the Bruins’ gap to 35-22. Dylan Graham added at 182 to shrink the gap to 35-28. Christian then notched the clincher.

“Mason is getting back into it, now,” Johnston said about the college wrestling-bound Bulldog’s injury recovery. “He keeps grinding.

“It was a great team effort tonight. Our seniors performed awfully well. They’re a great group, great kids. These kids have done a lot to build this great group.”

The coach noted that Whitlock, Hardesty and Stepan all wrestled a weight class higher than their actual weights.

“They best asset this team has is that it is a selfless group,” he said. “They’re for the team and are willing to bump up a weight class if it helps the team.”

Six girls’ bouts were also held with Capital having fewer girls to enter in the fray than Butte High’s roster.

The Bulldogs got pins from Kaylee LaPier at 107 pounds and Sophie Grunhuvd at 120. Grunhuvd also sang The National Anthem to launch the event. Butte High teammates Bazo and Wilcox wrestled each other so they could compete in a bout on their Senior Night. Bazo won on a pin. Capital picked up wins from Taylor Lay on a pin at 126 pounds, Lily Bennum on a decision at 137 and Bryton Kipp on a pin at 152. 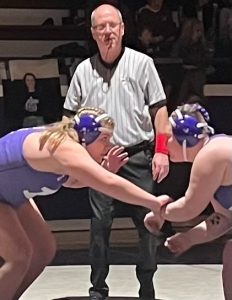 Makenna Bazo and Ashlee Wilcox, the two got to dual each other to participate in their senior night. Bazo won by pin. Ken Carver Ref, (Photo by Bruce Sayler for Butte Sports.)

Butte High has four dual meets on the road next week with the Bulldogs going to Bozeman Tuesday to vie against Bozeman High and Bozeman Gallatin in non-conference action, then traveling to Kalispell next Saturday for Western AA competitions against Flathead and Glacier Highs. The Butte High girls will also in a mixer on Dillon on Monday before going to wrestle in the meets in Bozeman and Kalispell.