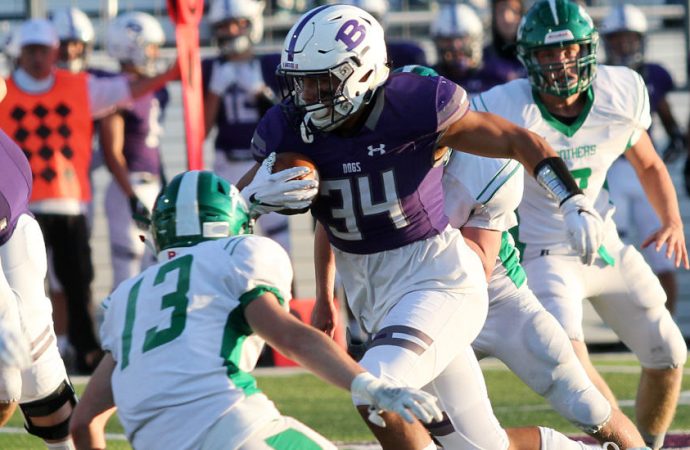 Tommy Mellott had plenty of time for reading Friday night. He also had a lot of material.

The Butte High senior quarterback directed the Bulldogs’ abundant arsenal of talent to near perfection, passing for 332 yards and five touchdowns as Butte High knocked off Belgrade 46-20 in front of a large, boisterous Naranche Stadium crowd. (Stats)

“It’s just an air-raid offense,” Mellott said. “Coach Grey gives me a chance to really read the defense and he gives me the opportunity to make the right decision and not be pigeon holed into one decision.”

Mellott, who threw a second half interception, completed his first 10 passes, directing the Bulldogs to touchdowns in five of their six first half possessions.

At times, Mellott seemed to have all night to find a receiver behind offensive linemen made up of Konor McClafferty, Lucas Kingston, Nick Steilman, Ty Raiha, D.J. Jackson and Timmothy Hollingsworth.

“It just kind of says what our offense is and how many weapons we have,” Mellott said. “Our offensive line did a great job blocking.” 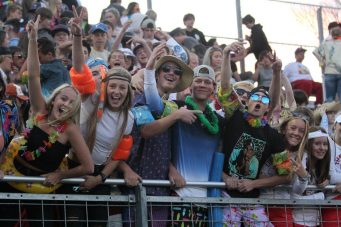 Mellott’s five touchdown passes ties him for No. 3 on the school’s all-time list with Dallas Cook and Josh Paffhausen. Cook, who also passed for six scores in a 2013 game, threw for five TDs five times.

Dylan Cook’s seven touchdown passes in 2014 is the school record.

After three runs by Kameron Moreno and a keeper by Mellott, the quarterback hit a streaking Quinn Sullivan for a 48-yard touchdown pass.

The pass appeared to be overthrown before Sullivan, who contributed in all three phases of the game, turned on the jets to haul in the pass in stride for the score.

It was the first of two TD passes to Sullivan, who caught four passes for 77 yards.

Mellott hit Banner Cetraro for a 31-yard score before hitting Cory West for a 14-yard catch and run as Butte High built a 20-0 lead.

The Panthers got on the board when John Mears hit a 39-yard field goal in the second quarter.

Butte High answered with a 2-yard touchdown run by Kameron Moreno, who scored one play after a 25-yard run by Mellott.

Belgrade quarterback Dyson Cheney scored on a 16-yard scamper, but Butte High answered with a six-play drive that was capped by a 23-yard strike from Mellott to Ryan Neil for a 33-10 halftime lead.

The Panthers used their ball-control running attack to set up some play-action passes. Cheney hit Tate Fowler for a 31-yard touchdown as the Panthers pulled to within 33-17.

Butte High, though, put the game away with another Mellott-to-Sullivan strike — this time for 18 yards — and a 4-yard run by Kobe Moreno.

Mears hit a 24-yard field goal to cap the scoring with 59 seconds left in the game.

Mellott said the Panthers, who played their first Class AA game after decades playing Class A ball, were impressive in defeat.

“They had some dudes out there at wide receiver and cornerback,” the quarterback said. “They had some speed and talent out there. They impressed me. They’re a good team coming up from A to Double A.”

Cetraro caught four passes for 62 yards, while West grabbed three for 63. That includes an acrobatic catch for a 35-yard gain down the Butte High sideline.

Mellott said his favorite part of the night was handing off to Kobe Moreno for his touchdown. The senior missed all but a couple of plays last year with a torn ACL.

“As soon as that happened I ran over there and gave him the biggest hug,” Mellott said. “He’s done more work than anyone I’ve ever seen. He’s an absolute workhorse, and I love the kid. He deserves everything that comes to him this year. He’s going to stay healthy and he’s going to keep working. He’s going to be a dude.”

Defensively, the Bulldogs were far from perfect. They did, however, make big plays when they needed to.

Sullivan, who blocked and recovered a punt, Lucas Kingston also got in on sacks. Neil, Kingston, Sullivan and Tucker LeProwse each tallied five tackles, while Rylan Richards got in on four. Tanner Huff, Hollingsworth, Aidan Lee and McClafferty each got in on three.

Billy Kelly picked off a pass.

“We struggled with it sometimes,” Grey said of Belgrade’s offense, which resembled the wishbone at times. “Kudos to the defense for making some big stops. We had two interceptions. One we held them to a field goal, and one we got a stop. That’s what you have to do.”

Butte High will head to Great Falls High for a non-conference game with the Rustlers next Friday night. They’ll open Western AA play Sept. 13 at home against Helena High.

Grey said the Bulldogs now have a building block after Friday’s impressive win.

“We made a couple of mistakes, but it’s all stuff that we’re going to grow from,” Grey said. “There’s some really great things that we can take from tonight as we make that big jump from Week 1 to Week 2.”