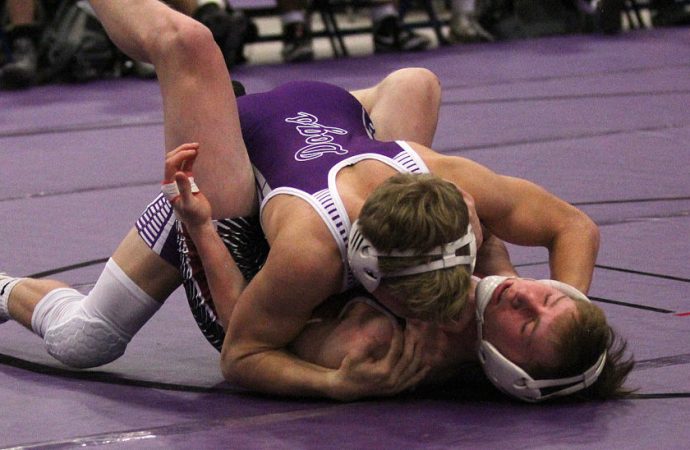 The Bulldogs sat in third place after the first-day action at the tourney in The Metra, after sending six wrestlers onto the Saturday morning semifinals and keeping 12 total competing as of the Friday curtain fall. (Click here to follow the brackets and team scores.)

“We had a really good day,” Butte High head coach Cory Johnston enthused. “It was also emotional, though. You don’t want to see anybody’s season come to end, but, realistically, it has to — today or tomorrow.

“I’m proud of the kids. Their fight has been tremendous.”

Keeping a dozen of the 19 Bulldogs entered active a second day is a noticeable achievement. It is especially so with the list of semifinalists the team produced – sophomore Trey Whitlock at 103 pounds, junior Keagan Gransbery at 120, senior Scout Allen at 138, senior Quinn Sullivan at 160, and the Moreno twins – Kameron at 205 and Kobe in the 285-pound limit weight class. They, too, are seniors. Kameron Moreno is the defending champion at his weight class while Kobe placed fourth at 170 two years ago before missing all last season with a knee injury incurred during football season. Gransbery placed third at 103 last year.

So, a dozen Bulldogs will be in the Saturday 9:30 a.m. semifinals and consolation quarterfinals.

“We have a lot kids in the Bulldog Round, which is what we like to call it,” Johnston said. “We need to come out ready to fight. We’ll have a lot really big matches.”

Friday ended with Great Falls High leading the 15-team Class AA standings. The Bison stacked 127 points while Billings Senior was in second place with 108 ½, and Butte High third with 102 ½, just ahead of fourth-place Kalispell Flathead’s 99. Defending champion Bozeman rounded out the top five with 94 ½.

The momentum sparked by some of the lighter guys was kept on pace by Sullivan and the Morenos as the day finished. It began with a 45-minute delay related to technology problems with administering the tournament. Similar glitches halted action during the ensuing rounds, as well.

Sullivan held off Billings West’s Logan Gallagher for a 7-4 decision in the quarterfinals. The Butte High part of the round began with Whitlock pinning Hunter Rahn of Helena Capital in 3 minutes, 18 seconds. The next Bulldog win was by Gransbery in a bout-long consistent, aggressive effort for a 13-1 major decision over Isaac Ayers of Missoula Big Sky. Gransbery will meet Eastern Divisional titlist Colton Martello of Great Falls C.M. Russell in the semifinals.

Whitlock is matched against Eastern AA champion Hunter Ketchem of Skyview in the semis, and Sullivan is to face East AA top seed Thomas Klepps of Billings Senior. Allen will go against three-time defending champion Leif Schroeder, an Iowa signee, after wrestling impressively and in control through Friday’s first and quarterfinal rounds. Allen outpointed Air Force Academy appointee Gentry Lamb of Skyview 10-4 in the quarterfinals.

Kameron Moreno registered a 12-3 major decision against Jayden Hoff of Billings West to gain a semifinal berth opposite Great Falls High standout Elijah Davis. Kobe Moreno, likely the lightest heavyweight in the building, polished his cowboy cradle and came up with pins over much bigger opponents, in 1:57 against LeVarion Morin of Billings Senior and in 3:44 over Tyler Blaquiere of Billings West. His semifinal opponent will be future Montana Tech football teammate Tom Walkup of Bozeman, who was the runner-up to Great Falls High’s Ethan Deroche in the 2018 and 2019 state heavyweight finals.

Butte High wrestlers Cowhen Houchin, Gavin Vetter and Anthony Liva each won a bout before losing out in consolations. Houchin was forced out by Raiha in an unfortunate matchup for the Bulldogs. Liva lost his loser-out 5-4 on a reversal with fewer than 10 seconds left in the bout.

Tierney pulled out his second consolation bout by breaking a 1-all tie with a pin and with only 5 seconds left on the clock.

“I’m not surprised by any of our kids,” Johnston said. “I knew they were ready. The kids are great workers and just have to some confidence in themselves. Now, they have some and it feel really good.”

He agreed the second round was key in that the Bulldogs who lost in the first round all seemed to come angry to the next round.

“We talked about it before,” the coach said. “We knew we couldn’t have 19 state champions, but that didn’t mean we were done. I like our chances when the kids keep wrestling.”

Two-time defending champion Sidney tops the Class A standings with 147 ½ points, well ahead of Miles City and Frenchtown, tied for second place with 83 ½. Butte Central didn’t score. The Maroons sent a wrestler, John Crossman, to state after being unable to enter any last year. Crossman, however, didn’t quite have the experience to gain a win either time he took the mat on Friday.