The Bulldogs put up some good times and showed some fight during the Purple and White scrimmage that zigzagged through Uptown Butte before finishing in Naranche Stadium. (Complete results)

“I’m not really concerned with the times, just the effort,” Wadas said. “They’re racing is one thing I’m really impressed with.”

Junior Billy Cunneen, who was an offensive lineman this time last year, looked poised to win the before taking a wrong turn entering the stadium.

That opened the door for Casagranda, who crossed in 17 minutes, 59 seconds. Senior Austin Gerry took second at 18:06, followed by Cunneen at 18:10. 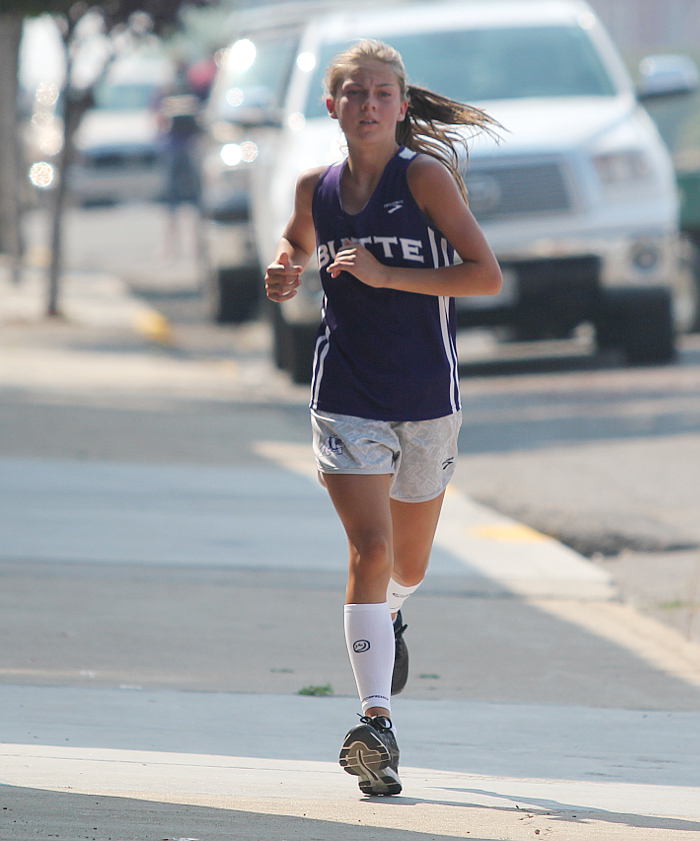 Corcoran, who ran the race as a junior high student in the past, opened some eyes by finishing in 21:17. Fellow freshman Hailey Tonnerson was second at 21:34, followed by sophomore Katelyn Rapp at 22:41.

“I think in the middle we’re way tougher than we were last year,” Wadas said. “We don’t have the leadership yet that we did last year, but I think the kids we just elected captains are going to help us out a ton.

Cunneen, Gerry, Taylor Huff and Helena Schoonen were elected captains for the Bulldogs, who open the season at the Butte Central Invitational, which is Aug. 29 at Fairmont Hot Springs.

“We’ve definitely got some stuff to work on with them, but I think it’s paid off with the work some of them put in over the summer,” Wadas said.

The coach pointed to the dedication of Moore, Martin and Foley.

“A couple of sophomores and a senior that put in a ton of work,” Wadas said. “They are minutes ahead of where they were last year. All of those guys want to be in the varsity seven. They don’t want to give it up this year.”

The Purple and White scrimmage will serve as part of the qualifying for the varsity roster for the opener. The team will also hold a time trial to help solidify the lineup.