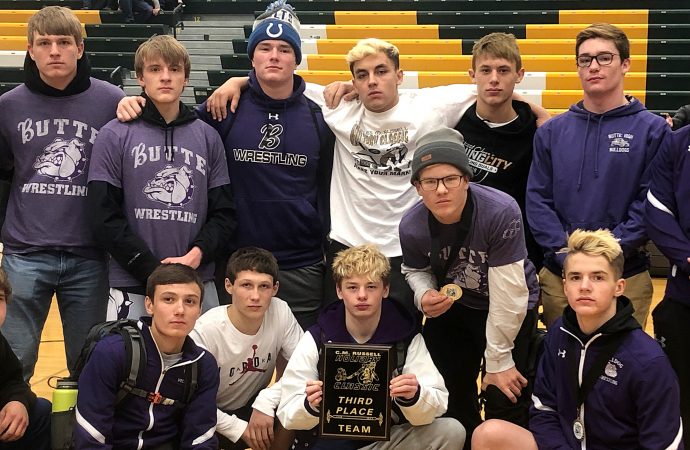 Butte High's wrestling team shows off its third-place plaque from the CMR Holiday Classic in this Dec. 15 courtesy photo from Great Falls. The Bulldogs are looking to improve on that finish at the state meet this weekend in Billings.

Glory days have been elusive in most recent years for the Butte High School wrestling program.

The once bona fide Class AA juggernaut hasn’t captured a team championship since 2003, and hasn’t brought home a team trophy since third place in 2006.

Head coach Cory Johnston is building hoped change into the mix nowadays and improvements have been obvious. The Bulldogs might be ready to contend again.

“We had a good practice tonight,” he said Wednesday evening, the night before the team boarded the bus for Billings to vie in the state meet Friday and Saturday. “There was a lot of energy, there was a lot of excitement. The work is done. It’s collect-paycheck time.”

Butte High qualified 16 wrestlers through last weekend’s Eastern AA seeding tournament for this weekend’s state tourney at The Metra in Billings. The list includes three No. 1 seeds in sophomore Keagan Gransbery at 103 pounds, senior Carl Anderson at 160 and junior Kameron Moreno at 205. Anderson and Moreno are returning state place-winners — third at 160 and sixth at 182, respectively. Gransbery saw time on the state tourney mats as a freshman.

A good share of the Bulldogs going to State have been there before.

“We’re battle-tested,” Johnston said. “I like our first-round draws and matchups, and ones after that. Nobody feels like they (got put in a spot they can’t win).”

It could have been more. Butte High entered a full two-deep roster of 26 wrestlers in the seeding tournament, but eliminated themselves three or four times in wrestlebacks by facing actual teammates in early loser-out rounds.

“We have the 16 we have,” Johnston said. “If we didn’t lose some early matches, we wouldn’t have had to face each other (in the loser-outs). But, it’s a good 16. I told the parents at our dinner the other night that I’ll never be satisfied until we get all 26 in to State. The guys we have all have confidence and they’ve all wrestled high-stakes matches. They’ve all experienced The Metra. I wouldn’t want to bring any else’s 16.”

Bouts are to start at 10 a.m. on Friday and continue through the day, resuming on Saturday with semifinals and consolation matches at 9:30 a.m. The championship round is scheduled for 3:15.

Each round will begin at the 103-pound weight class until the championships, which will start at 160. Class A, Class B and Class C schools will be competing in their state tournaments also as the large Billings facility has played host to the all-class meet yearly since 1989, except in 2011 when tornado damage to the roof forced the Montana High School Association to break the event into three parts and send them to other venues.

Butte High won its first state team championship in 1980, which began a string of 13 in a row through 1982, all under head coach Jim Street. The Bulldogs added two more crowns under Street in 1995 and 1997. Corey Bolton guided them to the 2000 state crown and John Metz led them to it in 2003.

“We brought in Coach Street to give our kids some insight,” Johnston said. “If anyone knows how to motivate, it would be him.

“Ron gave them some good insight on what it’s like to wrestle in something like this He gave our kids some good information.”

Collins was undefeated his state championship season and was unscored upon in the 1982 state tournament.

Both Street and Collins are enshrined in the Butte Sports Hall of Fame.

Gransbery’s only loss this year was to Havre standout Mick Chagnon and brings a 24-0 seeding record to the state AA tournament. Anderson’s is 25-7 and Moreno’s 21-1. Liva, Sullivan, McGrath and Endy have all won more than 15 matches. All but three Bulldogs in the state meet have winning records. Gransbery, Queer, Allen, Liva, Kent, Anderson, Sullivan, McGrath, Moreno, Harding and Endy all wrestled at State last year.

“It’s not a surprise to us that the kids stood up (to big challenges in Bozeman),” Johnston said, and cited efforts by Anderson, Allen, Moreno, Harding and Raiha as being especially important for seedings out of last week’s meet.

Raiha is a first-year wrestler and Allen missed the season between the pre-Christmas Great Falls CMR Holiday Classic tournament and the seeding tournament because of a broken leg suffered at the CMR meet.

“It was big for a lot of our kids,” Johnston said. “They don’t think there’s going to be anybody at State they can’t compete with.”

It is going to be good competition, too. Kalispell Flathead is the two-time defending champion, but Bozeman, Billings West, Billings Senior, Butte High and Helena Capital hold down the top five spots in the latest poll. Great Falls High is another looming power.

Also, seven defending state champions are in the field, including two-time titlists Isaac Romero of Helena High, entered at 120 pounds, and Leif Schroeder of Bozeman, in at 132. Other reigning champs and their weights this year are Alejandro Madrid of Billings Senior at 113 pounds, Sterling Quinn of Bozeman at 126, Kai Stewart of CMR at 145, Chance McLane of Bozeman at 152 and Jace Rhodes of Billings West at 170.

The Butte High wrestlers were among the featured guests at the school’s winter sports pep rally on Thursday at 10 a.m., Johnston said. They then boarded their bus for Billings. They will practice Thursday evening in The Metra. Parents and fans of the team will take part in a social at the Billings Hotel and Convention Center from 7 to 10 p.m.

“It’s going to be super tight,” Johnston said, talking about the tournament competition. “I think there’s six teams battling for three trophies up for grab. Only about six points separate them (in projections), less than two points apiece. It’s going to be crazy.”

Sidney, Colstrip and Circle will be looking to repeat in