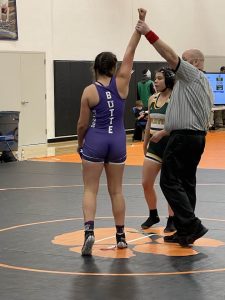 “It was yet another solid outing for the Butte High girls wrestling squad, as they just simply continue to impress each time they step foot on the mats. They scrapped all weekend long and 11 of the girls placed in the Tom Leprowse tournament in Bozeman they also placed second as a team!” Geno Liva

The Butte High place-winnings were led by championships from Neveah Grunhuvd at 132 pounds, Sophie Grunhuvd at 120 and Kaylee LaPier at 107. LaPier defeated Aaliya Northey of Butte Central in the 107-pound title match.

The Bulldogs got fifth-place finishes from Peyton Liva at 100 pounds and Ashlee Wilcox in the 235-pound limit class. Jessie LaPier rounded out the Butte High list of place-winners with a sixth at 107.

Billings Senior won the girls’ part of the tournament with 224 points and the Bulldogs were second with 211. Third place went to Billings Skyview with 165.5, Butte Central scored 22 points in the 23-team field.