Butte Central hosted the party, but it was Butte High’s girls who ran off with the prize.

Laurel’s girls were second with 103 points, Livingston was third at 98, while the Butte Central girls posted 55 points, good enough for fifth place.

Dillon won the boys’ side, rolling up 106 points in the win, while Belgrade was second at 87 and Laurel was third with 83.5. Butte High took fourth with 69.5 points and Butte Central was fifth with 66.

The Maroons saw plenty of athletes climb the awards podium Saturday, led by both sprint relay teams. Butte Central’s boys – Blake Burton, Cole Harper, Nate McGree and Kyle Harrington – put together a series of smooth handoffs to post their fastest time of the season, a 44.28. 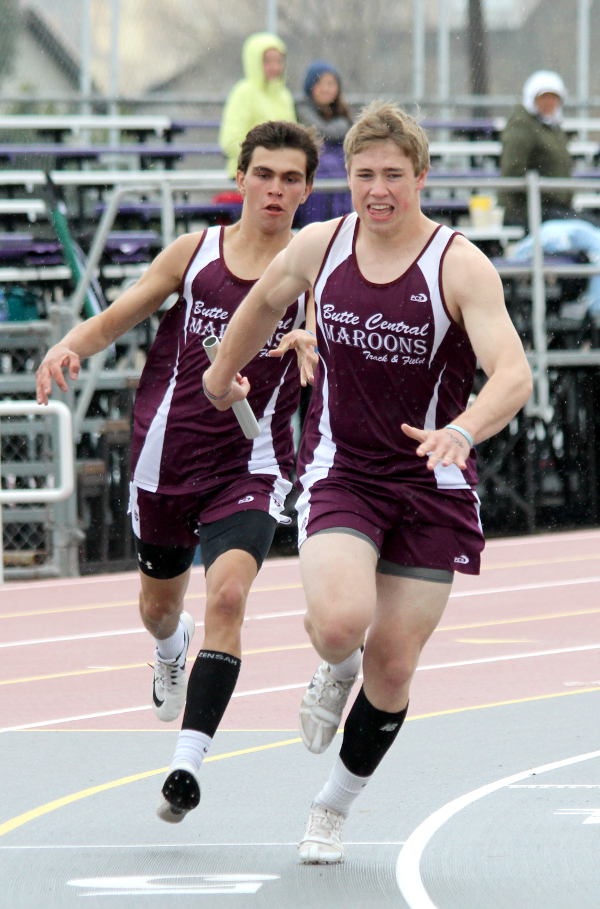 Butte Central’s Nate McGree takes the handoff from teammate Cole Harper as he accelerates into the back turn of the sprint relay Saturday. (Pat Ryan photo)

“Both of our relay teams ran really well,” said Butte Central head coach Zack Stajcar, noting the improvement in handoffs for the boys following a rough run at last weekend’s Swede Dahlberg Invitational. “I think our downfall last week was we were trying to0 hard to catch up. This time we were a little more patient and it worked out much better.”

Butte Central’s girls saw junior Rachael McGree run to what is becoming a seemingly automatic win in the 100 hurdles. She ran half a second slower than her fastest mark of the season posted earlier in the week at the Top 10 meet in Missoula, but she was still almost a second and a half faster than her closest competitor Saturday – Butte High’s Abby Dodge. 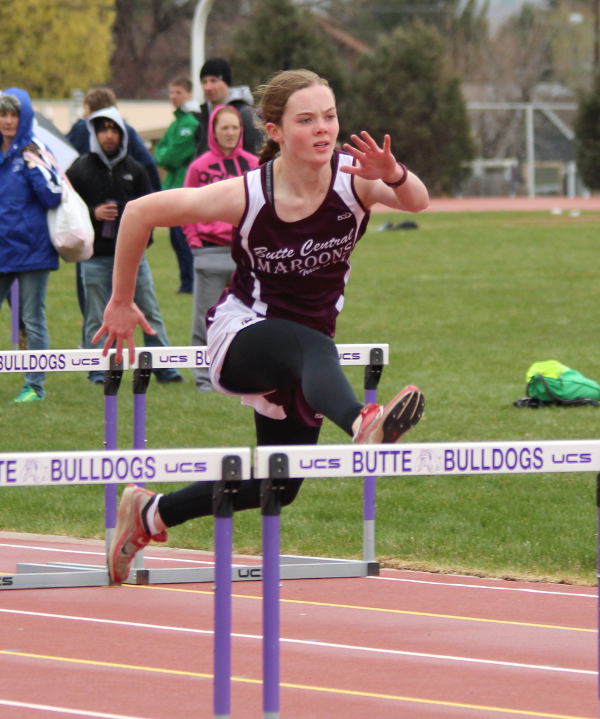 “Rachael’s got that race down,” Stajcar observed. “You can just see how comfortable she is.”

Rachael McGree went on to scratch three very long efforts in her long jump flight, missing out on the finals, but her little sister, freshman Lindsay McGree, was there to take up the slack. The youngster made the finals and won the event on her last jump of the day with a mark of 15-7. 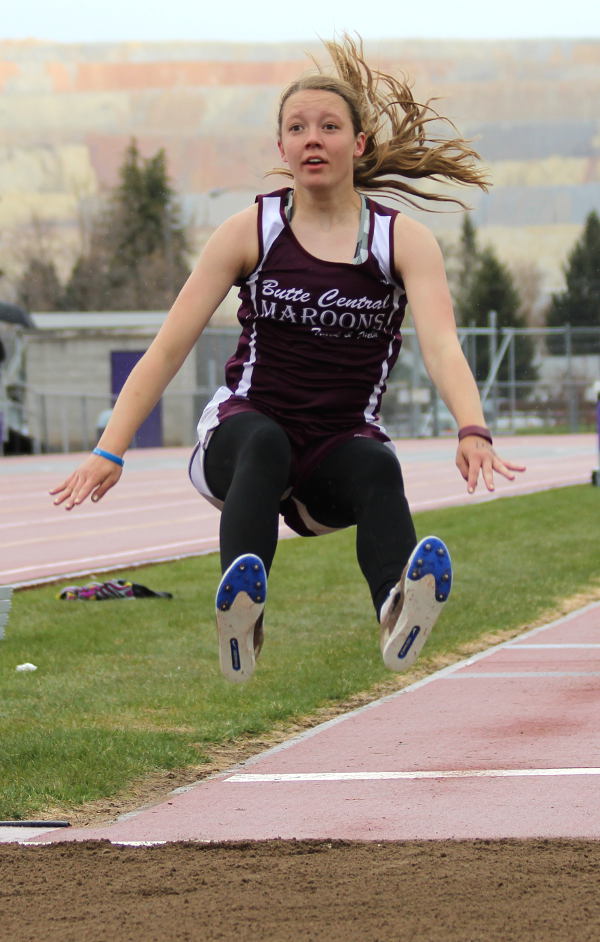 “As a freshman, she wins the event on her last jump at a meet named for her grandfather,” Stajcar said. “It’s been a pretty neat day for Lindsay.”

Whitney McGree posted a third-place finish in the 100 and a fourth in the 400 to close out a successful day for the McGree clan.

Still, the Maroons have more than just McGrees. Abby McGee ran to a fourth-place finish in the 800 as well as a sixth-place showing in the 800, while Aidan Dennehy launched the javelin 100-10.5 to claim third in the event. Kaylee O’Herron also secured fifth place in the high jump by clearing 4-6.

Butte Central’s boys were paced by junior Nate McGree who won the triple jump with a mark of 43-1.25, about 16 inches shy of his personal best. McGree also took third in the long jump with a measurement of 19-10.5 and fifth in the high jump at 5-6.

Maroon sophomore distance specialist Brian McGeehan turned in a second-place finish in the 800 and also took fifth in the mile. 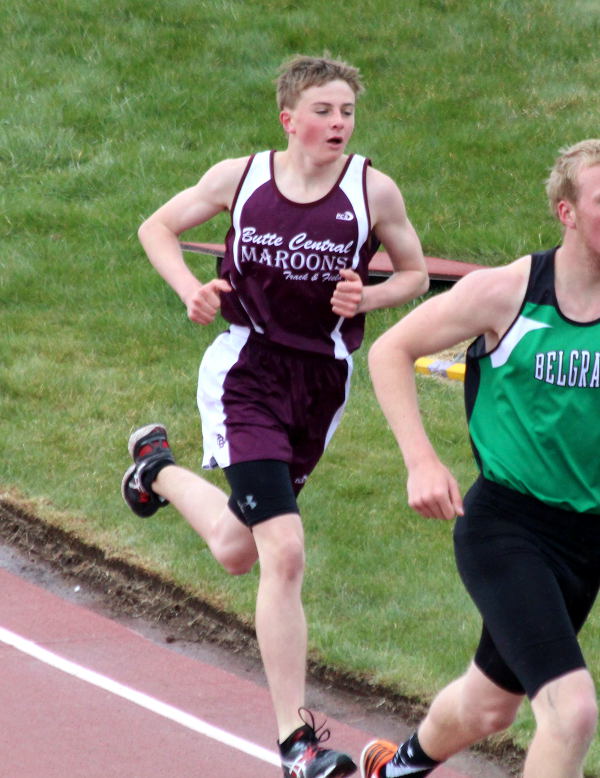 Butte Central’s Brian McGeehan looks for an opening to pass in the 1,600 on Saturday. (Pat Ryan photo)

“Brian works hard every single practice and meet, and it shows,” Stajcar said. “He’s getting stronger every day.”

Kyle Schulte led the way for the Central weightmen, taking third in the disc with a 142-1.5, and sixth in the shot. Ethan St. John added a fifth-place mark in the discus while Blake Burton notched fourth place in the javelin with a toss of 132-8.5.

Burton placed on the track as well, taking sixth in the 100, while Zach Carlson was fourth in the 400 and sixth in the 200. The Maroons closed out their team scoring with a 4-5 finish in the triple jump from Cole Harper and Cade Holter.

Joby Rosenleaf was all but unstoppable in the races she won Saturday – the 800 and the 3,200. She had a 2-second cushion in the 800 and won the 3,200 by almost a minute after lapping much of the field. 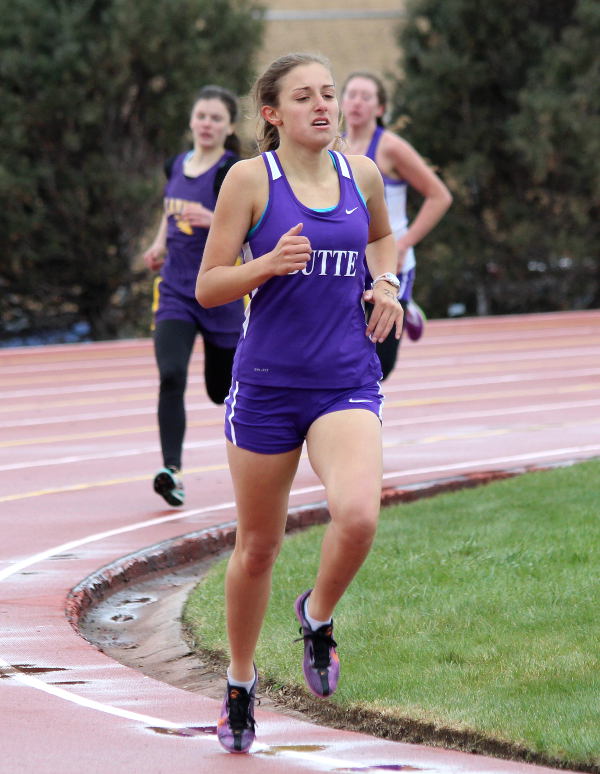 Abby Dodge also turned in another big performance for the Bulldogs, winning the high jump with a clearance of 5-feet, while taking second in the long jump, the 100 hurdles and the 300 hurdles. She completed her busy day with a leg in the sprint relay, along with McKenna Wendt, Mijah McLeod and Mar Sorini.

Sorini stayed plenty busy as well, taking second in the 200, third in the 400 and fifth in the 100. Sorini also ran the third leg of the second-place mile relay team that included McLeod, Caitlin Carmody and Rosenleaf.

Hailee Regan led Butte’s throwers with a second-place finish in the shot put and a fifth in the javelin, while Josey Earles claimed fourth place in the shot put.

Quinn Dennehy scored the lone win of the day for the Butte High boys, as he cruised to victory in the 300 hurdles after placing third in the 110 high hurdles. Teammate Lathan Ricketts was close behind for second in the 300 hurdles.

Ty Peterson added half a foot to his  best pole vault last weekend with a height of 12 feet, good for second Saturday, while junior Bryce Gallagher took second in the 110 hurdles and third in the javelin with a taping of 150-8.

Matt Merzlak poured it on to take fourth in the 200, while Gabe Tierney put in a gritty pair of laps in taking fourth in the 800. Matt Sweet earned a sixth-place finish in the 400 as well.

Bryce Liebel continued strong showings in the shot ring, as he took second with a put of 45-1, just three inches shy of the winning mark. Sean Cooney spun the disc 130-8 for the Bulldogs, and added a sixth-place tie in the high jump with a hop of 5-6.

The next action for Butte High and Butte Central will be next Saturday, again at Charlie Merrifield Track, as the Bulldogs host Billings Senior and Skyview, as well as the Maroons.