Butte High girls make it back to back over Maroons 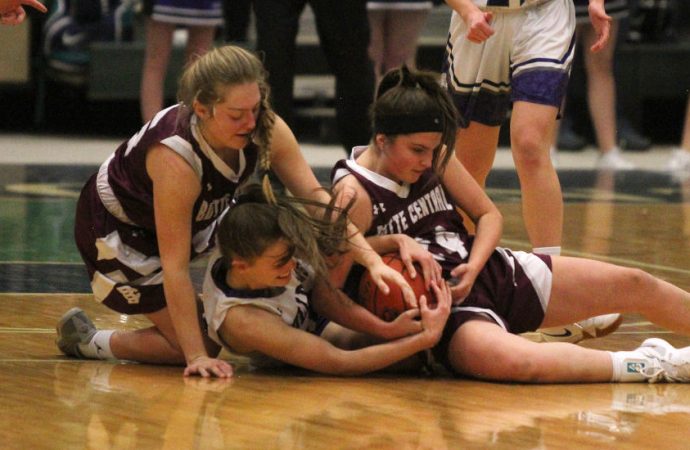 The game went according to script for the Butte High girls’ basketball team.

The Bulldogs built a quick lead Thursday night before holding off the feisty Butte Central Maroons for a 57-40 win at the Butte Civic Center.

When the game ended, the Bulldogs were quick to praise the ultra-young Maroons.

“They’re a young team, but they’re really good, and they challenged us,” Butte High senior Ally Cleverly said. “They’re just going to get better as the season goes on.

“They were scrappy, they kind of outboarded us at times, they hustled to the ball. They just kind of put it all out there.”

That BC effort came after the Bulldogs started the game just how they wanted to.

Aspen Lovshin hit a 3-pointer off a Brittney Tierney pass to start a 22-7 Bulldog run that turned a 7-5 Bulldog lead into a 29-12 advantage. 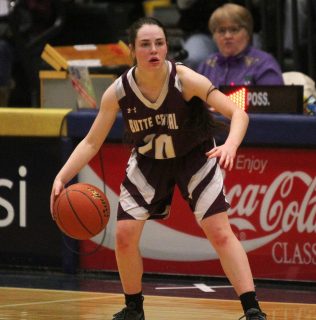 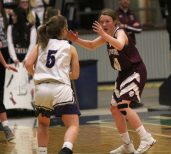 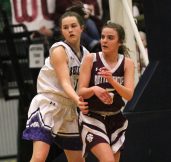 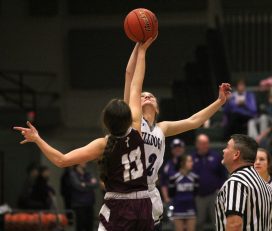 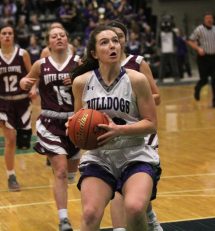 Bulldog Herron goes up for a layup after stealing the ball. (Bill Foley photo) 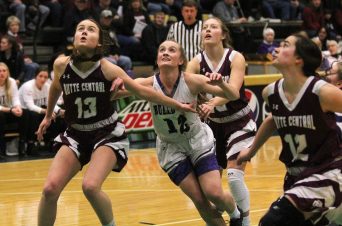 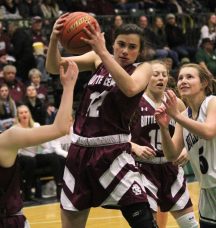 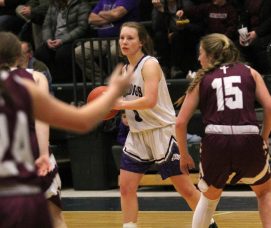 The win was the second straight in the rivalry for Butte High, which snapped a three-game losing streak to BC last year.

The win, though, didn’t go quite as expected after the early run.

Central Scored six straight points to pull to within 29-19 before Makenna Carpenter hit a jumper off a Cleverly pass 9 second before halftime go give the Bulldogs a 31-19 lead heading into the locker room.

The Bulldogs kept trying to knock out the Maroons in the second half, but BC battled until the end.

“Every time we made a run, they had an answer,” Bulldog coach Mauri Cook said. “They outrebounded us terrible. Hats off to them for getting to the loose balls.”

BC coach Meg Murphy also had praise for her team, which can win the Southwestern A regular-season title with a win Saturday at Corvallis.

“I’m proud of them,” Murphy said. “Our kids played well. Our young kids battled. We played the second and third quarter with a senior, a freshman and three sophomores.

“I’m not disappointed. Butte High is a good basketball team. They’re where they’re at for a reason.”

Cleverly and Lovshin scored 14 points apiece to lead the way as the Bulldogs improved to 11-3 on the season. They upped there all-time lead over BC to 35-18.

Grace McGrath and MacKenzie Tutty also played for the Bulldogs.

Lovshin, Cleverly, Tierney and Birkenbuel are seniors for the Bulldogs. Their careers started with back-to-back 2-19 seasons and two straight losses to BC.

Last year, the Maroons turned the tide, and Thursday’s win evens the Bulldog senior record in the crosstown rivalry.

“It kind of flip flopped for us,” Cleverly said. “When we came in, we were getting blown out. As the years went on, it just kind of slowly started to shift for us.”

That was also not lost on Cook.

“Our senior group has battled for a long time,” he said. “I said at the pep assembly that they have been through a lot, not only at basketball but all their sports. For them to go out like this and get Butte Central twice is a big accomplishment for them.”

Cook was happy his team won despite not playing on top of its game. The win was the 10th in 11 games for the Bulldogs.

“Our kids played great at times, and sometimes we looked tired,” he said. “It’s one of those games where the emotions and everybody so hyped up for the game that you just don’t play your best game.

Maddie Kump scored nine points, while seniors Bella Sorini and Tricia each scored eight for the Maroons. Freshman Sofee Thatcher, who was a force on the boards, scored six points, Amira Bolton and Emma Keeley each scored four, and Taylor Harrington tossed in one.

Shea Davis started and battled on the boards for the Maroons, too.

“We wouldn’t be in this position if we didn’t have her,” Murphy said of the selfless Davis, who went out for the team because program was low on numbers.

Avery Kelly and Delaney Hasquet also played for BC, which fell to 7-10 overall.

While the Maroons host to the Southwestern A District tournament after Saturday’s huge game at Corvallis, Butte High has four more conference games remaining starting with next Friday’s game at Billings Skyview.

The Bulldogs will then play at Billings West and Bozeman before closing the regular season Feb. 22 at home against Billings Senior.

“We’ve got a really important stretch in conference here,” Cook said. “So, we just regroup and get ready for the games.”

Cleverly said Thursday’s win will be one she will always remember.

“It’s a rivalry game, so it’s always super intense. You just never know how it is going to be,” she said. “It’s a ton of fun. I’m going to miss it for sure. The crowd is awesome. It’s just great. It’s a great atmosphere.”