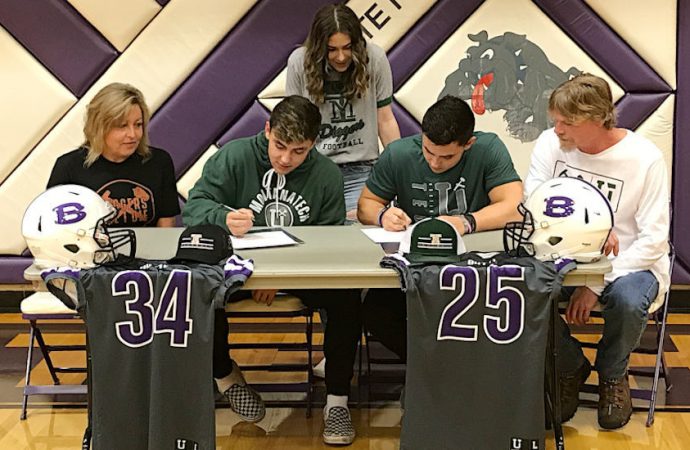 When Kyle Samson learned he would be Montana Tech’s next head football coach, his first order of business was to address his players.

No. 2 was to get Kameron and Kobe Moreno on the phone.

“That was my first recruiting call right after (getting the job) was talking to these two guys,” Samson said. “It was kind of an interesting time the last couple of weeks when we didn’t know what was going on. I’ve been staying in contact with them. I told them, ‘As soon as I know, I’m going to give you a call.’”

This morning, Samson was among a large group of coaches, teammates, family and friends at the Richardson Gym to watch the Butte High seniors officially sign to play football for the Orediggers.

“It feels great,” Kameron Moreno said. “I’m glad we got a big following and a lot of people supporting us.”

Parents Kerry Guidi and Tom Galipeau flanked the twins as the signed their NAIA Letters of Intent. Their sister, Kera Moreno, looked over their shoulders.

“It feels awesome that we’ve got so much support, and it feels good to get it out of the way,” Kobe Moreno said.

The Moreno brothers, who announced their commitment to Tech to Butte Sports on Tuesday, were a key part of Butte High’s run to the Class AA state championship football game in November.

Kameron Moreno rushed for 1,307 yards and 20 touchdowns as a senior. Only Montana Tech Hall of Famer Jay LeProwse, who ran for 1,607 yards in 1997, racked up more yards for the Bulldogs in a single season.

Kobe Moreno, who missed his junior season with a torn ACL, registered 48 tackles and four and a half sacks for the Bulldogs from his position at linebacker. He also played fullback for the Bulldogs.

Both brothers were named first-team All-State on offense, and both will represent Butte High in the Montana East-West Shrine Game in July. Kameron will play running back in the Shrine Game, while Kobe will play linebacker.

Samson said the brothers could end up playing any number of positions for the Orediggers. The brothers maintain they will play wherever they are needed.

The Moreno brothers stated that they would sign with Tech if Samson got the job. This morning, they followed through on that promise.

“It’s in Butte and we really wanted Coach Samson,” Kameron Moreno said when asked why the brothers were a fit at Tech. “He was probably the biggest factor.”

“We signed right away,” Kobe Moreno added of hearing the news Samson would be Tech’s third head coach in 33 years.

“That means a lot to me,” Samson said. “Our No. 1 thing is we want to win Butte. I think we’re doing a great job right off the bat. I’m hoping to sign a couple more over the next week or two.”

Samson first took notice of the Moreno brothers when he was head coach of Kalispell Flathead. The Braves opened the 2018 season against the Bulldogs at Naranche Stadium.

“I’ve had the chance to get to know these guys the last couple of years. In my opinion there as tough as they come,” Samson said. “They’re great competitors. They’ve been very successful in multiple sports. That’s one thing we’re looking for is guys that compete in multiple sports and are successful.”

The brothers will study occupation, safety and health at Montana Tech.

While they still have unfinished business on the mats for Butte High’s wrestling team, the Moreno brothers said they are eager to become Orediggers.

“It’s a dream come true playing in Butte,” Kobe Moreno said. “I can’t wait to get on the field again.”