Butte great Sam Jankovich stops by to say ‘thank you’ 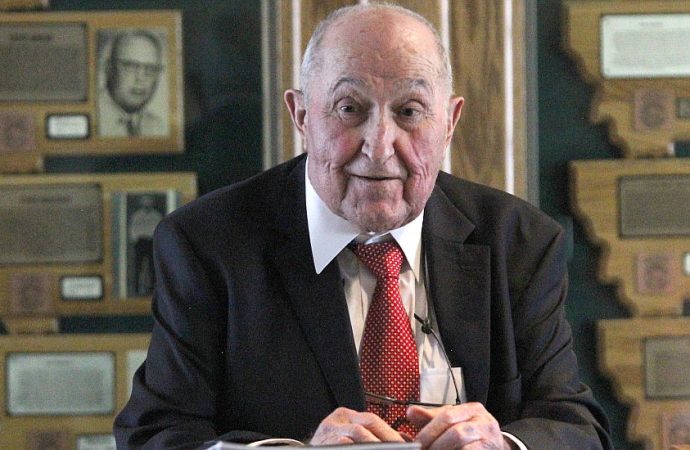 One day after his induction into the Montana Football Hall of Fame, Butte sports legend Sam Jankovich stopped by his old stomping grounds with two words on his mind:

That was the message Jankovich brought with him to a gathering of friends and former players at the Butte Civic Center lobby Sunday afternoon.

“When I look around the room, it might be one of the most emotional experience I’ve ever had,” Jankovich said to a crowd of about 40 gathered among the Butte Sports Hall of Fame monuments. “I would not be anything without the people in this room.

“I wanted to say thank you for what you did for Sam Jankovich.”

Jankovich went into the Hall of Fame during a ceremony in Billings Saturday night.

Each of the Montana Hall of Fame classes has included a Butte native.

Sonny Holland was inducted in the inaugural class in 2016, and Bob O’Billovich went in last year. O’Billovich planned to attend Saturday’s ceremony and Sunday’s gathering, but a family emergency prevented that.

“How great it is to have a group like this come together to recognize one of our own,” Ueland said he kicked off the ceremony.

Former Butte High football coach Sam Jankovich addresses the crowd at a gathering Sunday at the Butte Civic Center lobby March 25, 2018. Jankovich was inducted into the Montana Football Hall of Fame the night before in Billings. (Butte Sports file photo)

Sam Jankovich’s Butte Sports Hall of Fame monument hangs on the wall in the lobby of the Butte Civic Center.

Rick Halmes, the founder of the Hall of Fame, spoke and pointed out that the consensus was that Jankovich’s talk was the most impressive of Saturday night’s induction ceremony.

Halmes also talked about the Hall of Fame while recognizing the Butte Sports Hall of Fame.

Haley Beaudry, who played for Jankovich at Butte High, introduced the man of the hour.

Beaudry pointed out that, before Jankovich’s days at the University of Miami, his former coach led the Butte High Bulldogs to two undefeated seasons in four years.

“He went out from there and up from there,” Beaudry said. “It was just an amazing career.”

Jankovich, who will turn 83 this year, approached the podium with a walker. He was wearing a walking boot on his left foot.

He said he has gone through a “rough couple of years,” before making light of his reputation as a coach who worked his players very hard.

“I think some of my players see me and laugh,” Jankovich said. “They like to see me hurt a little bit.

“If I was coaching today, I’d probably be put in prison.”

Jankovich was the first football coach at Butte High school to lead two unbeaten and untied teams to the state championship. His teams did that in 1961 and 1964.

During his four seasons leading the Bulldogs, Jankovich led his teams to a 28-7 record. He served as an assistant football coach at Montana State and Washington before entering college administration.

In December of 1990, Jankovich was named chief executive officer of the New England Patriots. He spent two seasons in New England.

His career concluded as president and general manager as the Las Vegas Gladiators in the Arena Football League.

During his playing career, Jankovich was a captain of the 1951 Butte High football team that was declared co-state champions. He was also a member of the 1952 Bulldog basketball team that won the Southern Division title.

Jankovich was inducted into the Butte Sports Hall of Fame on June 8, 1991. His monument was just a few feet from where he spoke.

“The best job I ever had was coaching Butte High,” Jankovich said. “I wouldn’t change that experience for anything.”

Jankovich singled out some good friends who helped him along the way. He also mentioned his church family and his parents.

“No one in the world had better parents than me,” he said.

“I can’t say enough about Rick and the Hall of Fame,” he said. “If you want to talk about a class event. It represents what this state is all about.

“This is probably the last award I will ever receive, but it is one that I will cherish more than anything.”

Before he closed, Jankovich sang the praise of the Mining City.

“There’s no way you can grow up in this setting and not be a better person,” he said. “You can take the man out of Butte, but you can’t take the Butte out of the man.”