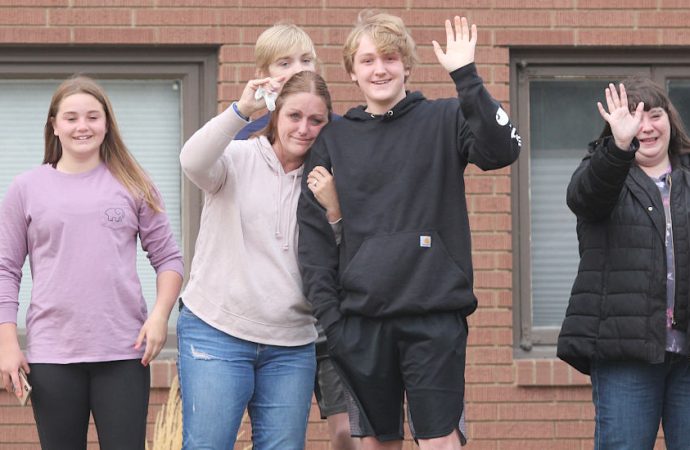 If Max Demarais did not know how much support he had in his community before, he certainly does now.

The 16-year-old Butte High sophomore stood in his yard on his Phillips Street home Friday evening and watched, in complete shock, as a parade of supporters drove by to let him know that they are in his corner.

The number of cars passing by, honking their horns and holding signs of support for Demarais numbered more than 100, and it took the better part of a half hour for them to all pass by his house.

“I knew everybody was supporting me,” Demarais said once the normally quiet neighborhood quieted down again. “This just shows how much people really care. With all this coronavirus stuff going on, they’re coming out, risking it, and showing support.”

The support was for Demarais, who is leaving this weekend for Salt Lake City. On Monday, he will undergo surgery to remove a tumor behind his right eye. The doctors will also take his eye in hopes that this will be the last surgery since the tumor was discovered just before Demarais started his freshman year at Butte High. 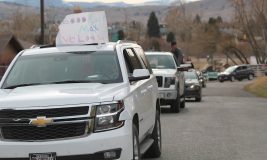 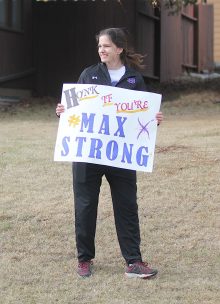 Butte High athletic trainer Christine Mayer holds a sign in support of Max Demarais. Mayer came up with the idea for the community to show support for Max. 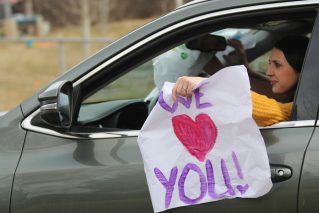 With his mother, Melissa, clutching his arm, Butte High sophomore Max Demarais watches a parade of supporters drive past his house on the evening of April 24. (Butte Sports file photo) 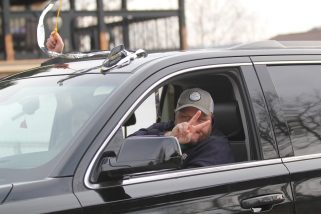 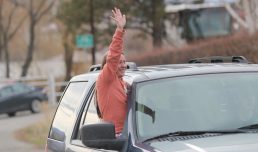 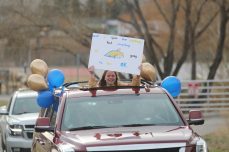 The decision to remove the eye and replace it with a prosthetic was made by Demarais, who already lost sight in the eye.

“I just want to get it over with and go back to being a normal high schooler, just having fun and living my life,” he said.

On Friday, his good eye saw nothing but love and support as community members, young and old, drove by. His teammates in football with and baseball drove by. So did many Butte Central students.

It was all a complete disbelief to Demarais, who was told to go outside for a surprise after returning from a celebration for his grandpa’s birthday.

“I walk outside and about a hundred cars start passing by,” Demarais said. “I was amazed.”

One sign gave a spoiler alert, reading, “Not to spoil the ending, but everything is going to be OK.”

That sign also included a drawing of the Montana State Bobcat logo.

Several drivers held out Bobcat flags, knowing that nobody in the world is a bigger Bobcat fan that Demarais.

Mayer came up with the idea and helped plan the parade that saw cars pack the parking lot at Father Sheehan Park before embarking on Demarais’ home.

“I felt bad that he had to go through making these decisions without having people around,” Mayer said, referring to the school closure because of the COVID-19 pandemic. “I wanted to make sure that he knew, on his way to Salt Lake, that we were all still behind him.”

Mayer lost count of the cars and people as she watched, in amazement, as so many went by.

“It was way cooler than I thought it would be,” Mayer said.

The moment even got to Demarais, who is known for his unbelievable positivity and steady emotions. His eyes filled up with tears as he stood on the lawn watching the parade. His mother, Melissa, clutched his arm while wiping away tears.

“This was the first time that I’ve actually teared up throughout this whole two years,” Demarais said. “Just the support is amazing. I just thank everybody for this.”

Demarais, who hit .378 for the Butte Muckers while only being able to see out of one eye last summer, said he plans to play baseball and football this year.

“I’m going to play baseball this year,” he said. “No matter how long the recovery takes, I’ll wait until l I’m 100 percent before playing baseball. And wear my glasses.”

The emotions of the evening seemed to strengthen Demarais’ already positive resolve.

“It just shows how much the people of Butte and everybody cares about a kid going through a lot. I’m so thankful for the support,” Demarais said. “I wouldn’t be able to do it without all them. Everybody asks, ‘How do you do it? How do you stay so positive?’ Those are the people who really keep me positive.” 2 comments