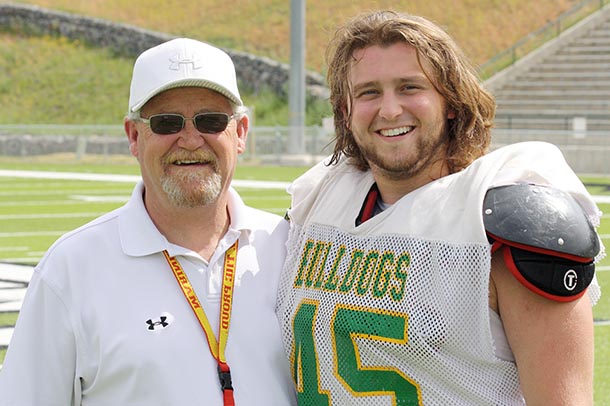 Saturday’s Montana East-West Shrine Game in Laurel has been 42 years in the making for Pat Schulte.

Though the 1971 Butte Central gradate was good enough at football to go onto play at Carroll College, he wasn’t selected to play in the 1971 Shrine Game.

“There were all kinds of Maroons in that Shrine Game,” Schulte said. “Bobby Burns, Buddy Walsh, Jimmy Regan, Bernie Brophy, the list goes on. There wasn’t enough room for me anyway.”

This year, Schulte was selected as an assistant coach for the West team.

“It’s absolutely one of the nicest things that’s ever happened to me, especially with the tradition we have in our family and our involvement in the Shrine Game,” Schulte said. “It’s a real honor to be out here.”

Also,  Pat’s oldest son, Connor, will play guard for the Westside on Saturday night. Connor graduated from Butte Central in May.

“With my son playing,” Pat said, “that makes it twice as nice.”

The family tradition and importance of the game has long driven Connor Schulte, who learned he was selected as an alternate for the game on Christmas Day.

“This was my biggest goal after I got my surgery,” Connor said, referring to a knee surgery that severely impacted his senior season.

Schulte, a two-way starter for the Maroons, tore the ACL in his right knee during BC’s Oct. 4 win in Anaconda. He missed a total of one game before returning to the lineup solely as an offensive player.

“We told (Dr. Nick) DiGiovine what our goals were, and the Shrine Game was about the seven-month point from my surgery,” Connor said. “He said that’s doable if you work hard.”

Connor put in the work along with Kari Williams, BC’s athletic trainer through Montana Sports Medicine.

“She was there every day and worked him,” Pat said. “She did a great job.”

“It’s kind of nice having your own personal trainer,” Connor said with a laugh. “The first couple of months were really hard, getting off the crutches after surgery and then getting back into shape. That was really hard.”

It was also hard playing through the painful injury to help the Maroons advance to the playoffs, where they lost at Whitefish.

“It hurt a lot, actually,” he said. “Once we got to the Whitefish game I tore my meniscus, and that made the whole deal a little bit worse.”

Still, the 6-foot, 250 pounder signed to play football for coach B.J. Robertson at Montana Western. He’ll major in history with a goal of becoming a teacher.

“Western just seemed like to be the place for me,” Connor said.

The Shrine game is also the place for him. He knew that since 2010. That was the first year the prestigious game was played in the Mining City.

“I was sitting up in the stands,” Connor said of the game that drew a huge crowd to Bulldog Memorial Stadium. “I was just, ‘Wow, I want to play that.’”

That was the first game Connor remembers attending. It probably wasn’t his fist one. There has probably been a Schulte at all 67 of the previous Shrine Games.

“I know there were a lot of trips in the car to Great Falls when I was little,” Pat said. “My dad has been to every banquet, I think.”

The game has always been important to Bob Schulte.

“It’s something he really looks forward to and really cares about,” Pat said. “A lot of his friends played in that game, and a lot of them are gone. He tries to be everywhere he can to support the kids and have one more Shrine Game every summer.”

Pat Schulte is coaching in the game for the first time in about 25 years of coaching on and off.

He coached at Carroll and Browning before joining the BC coaching staff four years ago.

Connor said having his father on the coaching staff made his high school football experience something special.

“It’s really an amazing thing,” he said. “It’s like being coached by your best friend. It’s just a really cool feeling.”

Pat started his coaching career after playing for coach Bob Petrino at Carroll. He was an undersized guard before becoming an undersized tight end.

“I started out as an offensive guard. Then my sophomore year during doubles we lost three tight ends, and I was informed by Bob Petrino that I’d be suiting up at tight end,” he said. “I think I have a record at Carroll. I think I’m the only tight end they ever had that never scored a touchdown.”

Connor got the long-awaited call about three weeks ago from West team coordinator Jeff Hartwick. He was no longer an alternate.

“He asked me if I wanted to play,” Connor said. “I said, ‘Absolutely.’ I was waiting. I was sitting by my phone.”

Thanks to his family ties to the game, Connor also has a firm understanding of what the game is all about. Last year’s game raised $146,000 for the Shriners Hospital for Children in Spokane.

“We crank in a lot of money that goes to the kids,” Connor said. “Last year we helped Sudah (Davis) get some new legs.”

Pat said all of the players come to understand that by the end of the week.

“I was blown away the other day, and I think Connor was too,” Pat said. “We have a young gentlemen from Butte, Tucker Thatcher (a long-time patient at the hospital), and he laid it on the line. If you didn’t have a tear in your eye, you don’t have a heart in your body. Tucker did an amazing job. He was absolutely amazing.

“I think this whole process funnels down to what this game is all about,” Pat said. “Everybody wants to win and do their best, but I think in the grand scheme of things there’s a dollar figure there that goes to help the kids.”

Then, of course, there’s the incredible talent in the game that pits the best of Eastern Montana against the stars of the Western Montana.

As an assistant coach, Pat Schulte gets a first-hand look at that every day as the team works out at Montana Tech.

“There’s not one weak spot on the whole field,” he said. “That’s unheard of.”

It’s every father’s dream to see such talent include his son. So for Pat Schulte, the 42 years was well worth the wait.

“I’m proud every snap,” Pat says. “Of course, I’m proud of him every day. He’s a good boy, not just a good football player.”