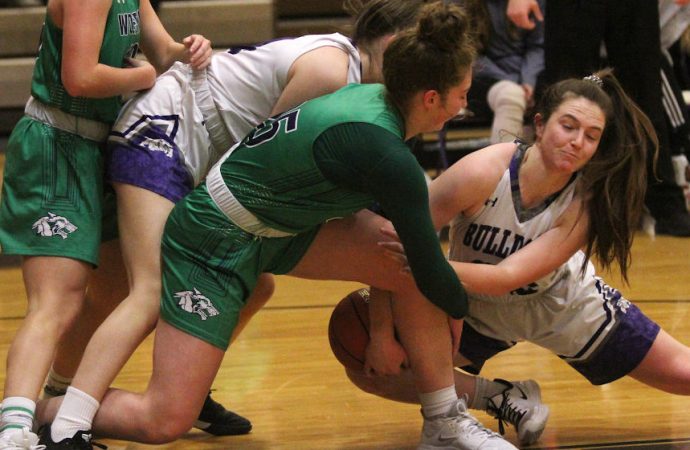 The Bulldogs simply dug too big of a hole.

Glacier led the Western AA game by 20 points early in the fourth quarter. Butte High rallied to cut that lead to eight points, but that was as close as they could get.

The Wolfpack shot 6 for 6 from the free throw line — with two shots coming on a technical foul on Butte High’s bench — to secure the win.

“I was really proud of that second half effort. Everybody that stepped on the floor, lights out defensively.”

As hard as Butte High played from the start, the Bulldogs just couldn’t buy a bucket for so long.

That lead turned into a 36-21 advantage after a chilly third quarter. Butte High went 7 minutes, 10 seconds without a point.

Kenzie Williams opened the fourth quarter with a 3-pointer, and Ellie Keller fed Allee Meyer for a hoop to extend the Glacier lead to 41-21.

The Bulldogs, though, would not go down without a fight.

Tylar Clary scored and Carpenter drove for a hoop to start a 12-0 Butte High run to get the Bulldogs back in the game.

That stretch included a three-point play by Carpenter. Herron hit two free throws before hitting a bucket to make it 41-33 with 2:40 left.

Butte’s momentum, though, was killed when the Bulldogs were called for a technical shortly after Herron’s bucket. A Bulldog bench player apparently made a comment to an official who was heading down the sideline.

Audrie Rademacher hit both free throws. Williams and Rademacher each added two more free throws as the Wolfpack secured the win from the charity stripe.

“We battled well. That’s a really aggressive team,” Cook said. “There was a lot of fouls, obviously. We kept our composure for the most part until the end there on the technical.”

Rademacher scored 11 of her game-high 19 points in the first half to lead the Wolfpack, who improved to 6-9 overall and 5-6 in conference.

Keller scored seven points, while Emma Anderson tossed in six. The Wolfpack also got four from Meyer and two apiece from Kaylee Fritz and Aubry Grame.

Carpenter scored 10 of her 14 points to lead the Bulldogs. Herron scored six of her eight points in the fourth quarter, and Clary finished with seven points.

Butte High got three from Ericson, and two from Kodie Hoagland and McCaul McCarthy.

While Cook was happy with his Bulldogs run in the fourth quarter, that same stretch frustrated him because he knows what his team can do.

“They never cease to amaze me in stretchers of what they’re capable of doing,” he said. “We’ve just got to be able to sustain that.”

Butte High will play at Missoula Hellgate next Saturday before playing at Missoula Sentinel the following Saturday. The Bulldogs will then head to Missoula March 5-7 for Western AA Divisional tournament.