Butte Central alumni too much for Butte High 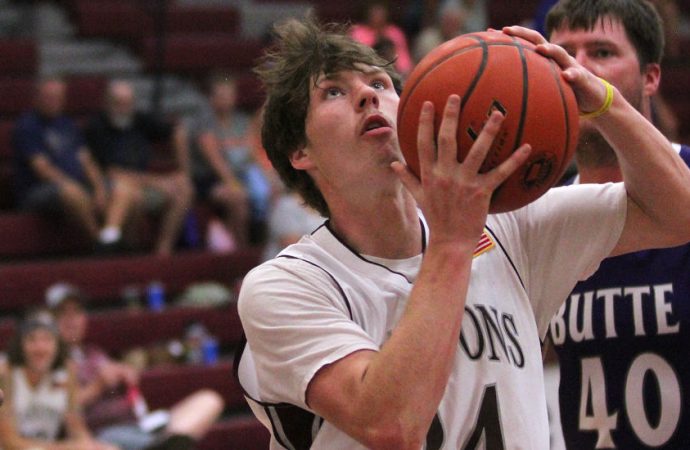 The prospects, futures, opportunities helped were the important takes for Tom Boyle from Saturday evening’s Burgman/Boyle Classic basketball game. For others, there were the memories and emotions.

The game result, the final score ranked quite low on the priority list for a Butte High-Butte Central contest.

“It was a successful night,” Boyle said and he wasn’t referring to an 82-71 victory for the Butte Central alumni over Butte High’s in the game played at the Maroon Activities Center. “I don’t know the amount raised yet, but I think it was a good one. The 50-50 (raffle) was good and we sold a lot of tee shirts.

“We can keep giving scholarships.”

It was the fourth annual holding of the game that rotates sites between the MAC, Butte High and the Civic Center. It commemorates friends Casey Boyle and Kyle Burgman, friends and former basketball players at their respective schools, who died in a car wreck on August 10, 2015. It is also the wedding anniversary for the Boyle brothers’ parents, Bernie and Peggy. This one marked 40 years.

Scholarships were awarded at halftime of Saturday’s game, including some to a few who played in the fundraiser.

The Maroon alumni led buzzer to buzzer on the way to their second win in a row, squaring the series at 2-all heading toward next year’s meeting in the Ross J. Richardson Memorial Gym at Butte High. 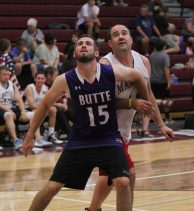 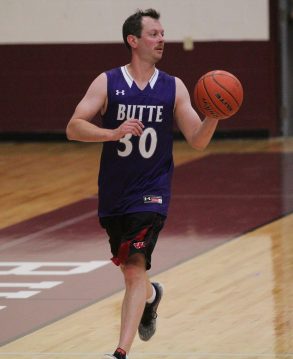 Noah Thatcher takes the ball down court for Butte High. 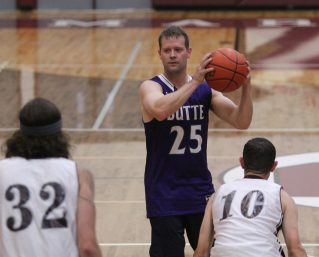 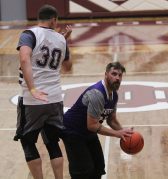 Chad Jonart of Butte High goes up for a shot after getting BC’s Tanner Neumann to bite on a head fake. 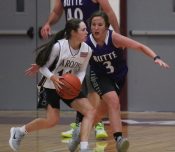 Former Bulldog Killian O’Leary, lending his talents again to the BC alumni, knocked down a 3-pointer 28 seconds into the game and the Maroons’ squad was on its way. Montana Tech all-time assists record-holder and ex-Bulldog Hattie Thatcher scored for Butte High to trim the difference to one, but O’Leary took a pass from Dan Boyle for a basket to spread the gap again. Former Butte High and Oredigger power forward Casey Briggs tipped in a miss for the Bulldogs.

Then, Brady Tippett, a Butte Central alum and former Montana Western hoopster, wrapped two 3-pointers around an O’Leary free throw and the Maroons were ahead by 12-4.

It was a 21-16 margin at the end of the quarter. Tippett was zeroing in on leading all scorers in the game with 22 points.

“We won without a ringer this year,” Tom Boyle said. “We didn’t have to bring in Terry Hauser.”

Jared Lovshin, who has been coaching at Butte High in recent seasons, pulled the Bulldog team to within 23-22 on a 3-pointer with 5 minutes, 43 seconds left in the half. However, ex-Maroons Renzy Kelly and Tanner Neumann, former Montana Tech athletes in football and basketball, respectively, clicked off the next seven points as BC regained distance. Kelly and Neumann are also current assistant boys’ basketball coaches at Butte Central.

Butte High surged just before half and cut its deficit to 35-33 as former Weber State and Carroll College women’s basketball team member Joey O’Neill tallied from inside. Tippett answered with two free throws and then current Butte HIgh assistant coach Chad Jonart drilled a 3-pointer to create a one-point difference, 37-36.

The Butte Central grads finished the half on two Tippett baskets, a layin off a Dan Boyle pass and on a steal-and-layup. A Dynamic Dance troupe performed at halftime with the scoreboard showing a 41-36 Maroons lead.

The closest Butte High got again was to within 47-45 after a Jonart trey at 3:11 of the third quarter.

BC blunted that rally with an 8-0 run of two Neumann free throws, a Kelly 3-pointer, a foul shot by Dan Boyle and then a drive to the hoop by Kelly.

Tom Boyle laughed when it was mentioned both teams had the luxury of a long bench as 26 players participated.

“So, there’s still a lot of  interest in playing in it,” he said. “It’s tough to turn the guys and gals away, We don’t want to anyway, but there might be fewer Boyles playing in coming years.”

The crowd, about 300 persons Saturday, probably wouldn’t agree. Brothers Dan, Tom and Matt all played in honor of their brother Casey and his friend. Casey was the third oldest. The Burgmans were represented on the floor by Butte police officer Kyle Barsness, who is married to Brianna (Burgman), an older sister of Kyle Burgman.

Tippett and Oredigger signee Cade Holter, with 12 points, were the only BC squad players to score in double figures. The Butte High grads were led by Briggs with 20 points and Jonart with 17.

“Casey Briggs is a load,” Tom Boyle said, shaking his head for emphasis.

Noah Thatcher of Butte High, and Dan and Matt Boyle dragged down six rebounds each to lead on the boards. Tom Boyle dealt a game-high four assists.