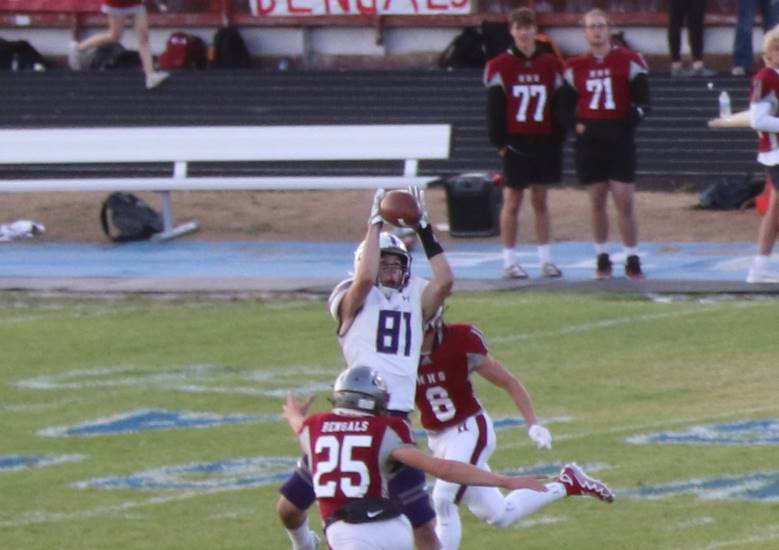 The Butte High Bulldogs opened Western AA conference play Friday night in Helena.  The Bulldogs fought from 20 points down twice in the game, turned the ball over 5 times and still had a chance to win.  Right down to their last play. 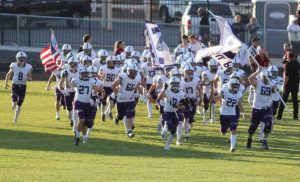 The never-say-die Dogs scored 7 points with 1 min 3 sec left in the 4th to cut the Bengals lead to 6 on a Jace Stenson to Hudson Luedtke touchdown and the Tyler Duffy point after. With the Bengals up 41-35 the Bulldogs brought in Ayden Harryman and he laid down a perfect on-side kick that was recovered by Karson Pumnea at the Helena 49 yard line.  With just under a minute to play the Dogs had a chance to pull out a victory.  Their hopes were dashed on the very first play when Kehler Woodland stepped in front of a Jace Stenson pass for a game ending interception.

“We gave ourselves a chance to win this game.  Our defense got a couple of huge stops late in the game when we needed it. I am so proud of how hard our kids played.” Coach Grey said. “We were down 20 points twice and never gave up, they battled back giving us a chance to win the game.”

Helena started the scoring with 4:30 left to play in the opening quarter.  Bengals quarterback Carter Kraft hit tailback Cade Holland on a swing pass that he turned up field for 34 yards to the Bulldog 18. Three plays later Holland scored his first of three touchdowns on a 4 yard burst up the middle.  The point after by Colter Petre made it 7-0 for the home team.

Just seconds in to the second quarter Holland added his second touchdown on the evening.  He started to his left and found an open lane back to the right going un-touched for the 18 yard score. Petre’s kick made it 14-0 Bengals.

The Bulldogs got the ball back and Jace Stenson put the offense in gear.  A 38 yard pass to Rueso Battermann put the Dogs in the Helena red zone at their 17.  A couple of plays later and Jace Stenson found his cousin Kyler Stenson cutting across the back of the end zone and the Dogs were on the board. Tyler Duffy split the up right cutting the Bengals lead to 7 with 8:24 left in the half. 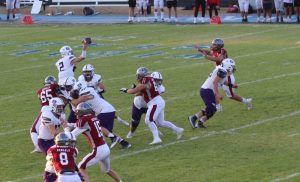 Jace Stenson with the pass

The Bulldogs defense did not waste any time getting the ball back.  On the second Helena play, after the Bulldog score, Issac Kohler punched the ball out of the hands of a scrambling Kraft.  Kale McDonald dove in to the crowd and recovered for the Bulldogs at the Bengal 26 yard line.  Stenson found McDonald racing down the sideline for a 22 yard gain to the 4 yard line.  Trey Hansen ran it in from there and in just over a minute from their first score the Dogs were tied at 14. 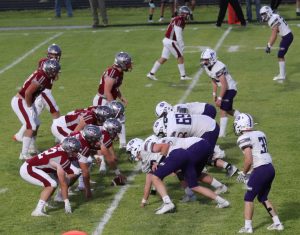 The Bengal defense got the ball back, when Holland, recovered a fumble by Trey Hansen on the Bulldog 29.  Holland broke the tie with his third touchdown of the game on a 10 yard run and with Petres PAT the Bengals ended the half up 21-14. Holland ended the game with 13 carries for 125 yards and 6 receptions for for another 65 yards and a fumble recovery.

Helena took the opening drive of the second half to the end zone with a Kraft 31 yard keeper.  The point after fell short and Helena was up 27-14.  It took just one minute for Helena to add to their lead.  Ryan Frisinger grabbed an errant pass by Stenson and returned it 30 yards to put Helena up 34-14. Kraft finished 17/22 for 221 yards, 1 touchdown and 1 interception.  He also ran for 52 yards on ten carries.

Cameron Gurnsey took over on the Dogs next drive taking a short pass from Stenson and running up the center of the field for a 43 yard gain. Stenson hit Gurnsey on the next two plays and the Bulldogs were in the red zone at the 19 yard line of Helena.  Gurnsey grabbed 8 catches for 133 yards with a long of 43 yards. The drive stalled when RJ Gulan intercepted a tipped pass at the 8 yard line.

The Defense stopped the Bengal drive on downs at the Dogs 14 yard line. Stenson used his legs with runs of 26 and 31 yards, then hit Hudson Luedtke for a 16 yard touchdown strike over the middle to make the score 34-21.  Stenson ended the game with 80 yards rushing and 338 yards passing. 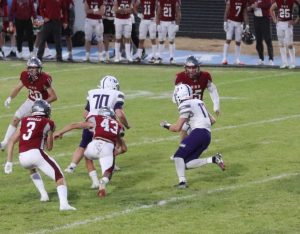 With just 17 seconds to play in the quarter Helena struck the end zone for the last time when Kraft hit Manu Melo in the back of the end zone from 25 yards out putting the Bengals back up by 20.

The fourth quarter belonged to the Bulldogs as Stenson to Stenson hit again from 5 yards put with 7:44 to play.  Once again Gurnsey made a crucial catch on 4th and 12 from the 25 to set up the 5 yard score.  The Bulldogs were down 41-28 setting up the the final drive and on side kick. 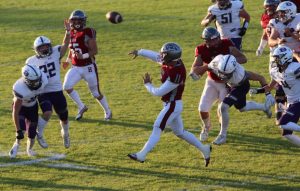 The Bulldog return home next Friday for a match up with Flathead. 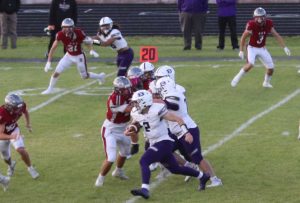