Bulldogs ‘up for the task’ as State AA approaches

The Butte High girls will be looking to make some and hear some noise this week as they make their first appearance in the state Class AA high school basketball tournament in six years.

The Bulldogs bring a 16-5 record and second Eastern AA seeding into the fray that will be held Thursday through Saturday in the Butte Civic Center. Eight games a day are planned with action in both the girls’ and boys’ competitions. (Girls’ brakcet; Boys bracket)

The Butte High girls will see their first action Thursday at 6:30 p.m. against two-time defending state champion Helena High. The Bengals were the preseason favorites, then went 17-1 in the regular season, emerging then as the No. 1 team in the Western AA Conference. They were tripped up by a young Missoula Hellgate squad in the Western AA Divisional semifinals, so enter the state meet as the No. 3 team from the West and owning a 19-2 overall record.

Other first-round games Thursday in the girls’ portion of the tourney have Hellgate playing Billings Senior at noon, Billings West going against Kalispell Glacier at 1:30, and Helena Capital taking on Great Falls High at 8.

The boys’ first round on Thursday shows a schedule of Helena Capital vs. Billings West at 9 a.m., Bozeman vs. Helena High at 10:30, Great Falls High vs. Missoula Sentinel at 3:30 p.m. and Missoula Hellgate vs. Billings Skyview at 5.

Bulldog head coach Maury Cook guided Anaconda to state Class A girls’ basketball championships in 2008 and 2009 before taking over the Butte High helm in 2015.

The Bulldogs reached the semifinals of the 2013 state tournament in their last trip to state. Jeff Arntson headed the program then and took the Butte High team to runner-up state finishes in 2006, 2008 and 2009. The Bulldogs have never won a state Class AA girls’ basketball championship.

So, the possibility is in the Butte High sights this year. The Bulldogs will probably be the shortest team in the tournament, but rely on a quick, scrappy and intense defense to hold opponents’ scoring down. Offensively, they like to run the court to make use of their quickness, but they can also connect well from 3-point range. Driving the key will often get them to the free throw line from where the Bulldogs have shot well recently. 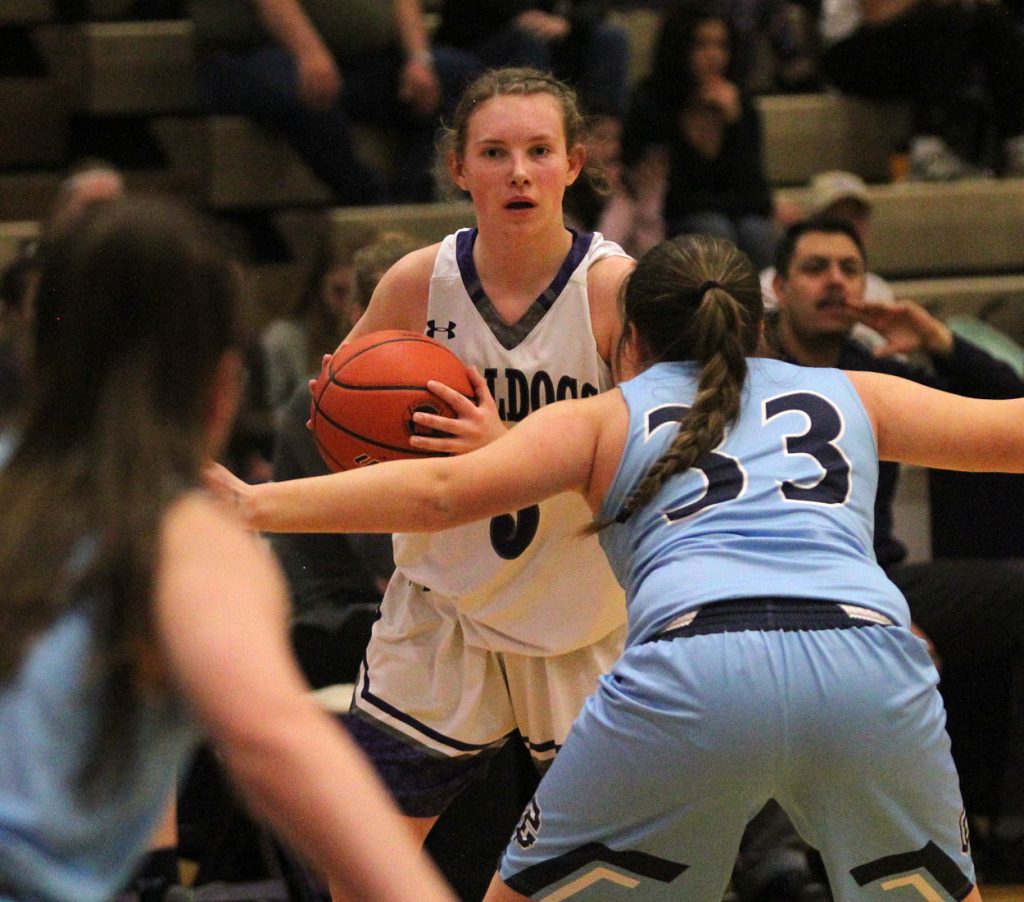 Ally Cleverly, a 5-foot-7 senior guard headed to Carroll for basketball and soccer, leads Butte High with a state third-best 14.6 points-per-game average. Aspen Lovshin, a 5-4 senior, averages 13.1, fifth in Class AA, and 5-8 junior Haley Herron leads the team on the boards with 7.3 rebounds per game on average. Makenna Carpenter, a 5-8 junior, and Brittney Tierney, a 5-6 senior, contribute all-around, too, with scoring, rebounding, passing and defense. Cleverly’s 4.11 assists per game lead the state.

The Bulldogs’ tournament roster also includes a bench of capable reserves in 5-7 sophomore MacKenzie Tutty, 5-8 sophomore Chloe Carpenter, 5-9 senior Justise Birkenbuel,  5-5 junior Trisha Ericson, 5-5 junior Grace McGrath and 5-8 sophomore McCaul McCarthy. Two juniors, 6-2 Kira Mortensen and 5-11 Cassie Hammack, will also be available. Mortensen has spent most of the season trying to come back from concussion effects and her health status will determine whether and how much she might play.

The Helena High girls are well-experienced in state tournament competition with their crowns won the past two years. Head coach Eric Peterson has a dominant team leader in 6-2 senior Jamie Pickens, a University of Montana recruit and reigning Montana Gatorade Player of the Year. Pickens averages a state-best 15-9 points, 12.8 rebounds, 2.46 blocks and 3.72 steals a game. The supporting cast includes 5-7 twin senior guards Paige and Peyton Aasved, and 5-9 senior Vanessa Walsh, who is No. 2 in the state in assists at 3.83 per game. More good height comes from 6-1 senior McKenzie Plummer, 6-0 junior Caroline Bullock and 6-0 sophomore Elizabeth Heuiser. The Bengals opened their season with a 43-29 win over Butte High and the Bulldogs are anxious to show their improvement since. 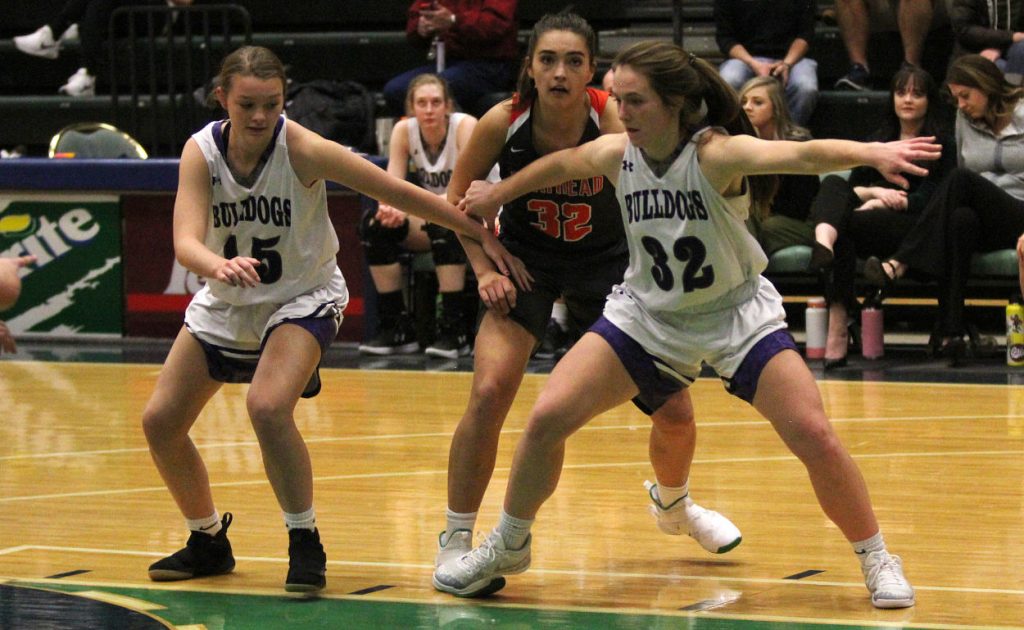 “I think (the Bulldogs) are up to the task,” Cook said. “The first game of the year isn’t much of a teller for either of us. If we can come out and play good defense and shoot the ball, we’re as good as anybody there.

“Versus Helena, after Jamie, the matchups are manageable. They are great shooters and we have to play defense. You never stop (Pickens). You have to mitigate the damage. We can shoot the ball well enough to be in it. There are no easy matchups once you get here.”

Cook said the overall health of the Butte High team is good and noted it is a team that has played to its own strengths well, recognizing what it does best and eliminating what it doesn’t do so well from its distractions. Being at a height disadvantage will not be a new problem to solve. The Bulldogs have battled it their whole careers.

“There are some big teams to contend with, so it will be about how we play defense,” Cook said. “Everybody’s been doing their best, doing great to help the team. I think they’re ready to go.”

Helena Capital (19-2) — Both of the Bruins’ losses this season were to Helena High. Katie Garcin-Forba is the Capital head coach and key players include 5-8 senior Sydney Sheridan, 12.1 ppg; 5-11 senior Emily Kidder, 9.9 ppg; and 6-1 sophomore Dani Bartsch, 9.5 points and 8.6 rebounds per game. The Bruins can also call on 6-4 sophomore Paige Bartsch and 5-10 senior Megan Lindbo for important contributions. They are the No. 1 seed from the West, having defeated Hellgate last week for the divisional title.

Billings West (19-1) — Head coach Charlie Johnson has Butte roots and the Golden Bears have the best record in the tournament, along with the top seed from the East with their divisional championship win over Butte High. Billings West’s only loss on the season was 48-46 to Butte High on the Civic Center floor on January 19. Shayla Montague, a 5-11 senior, is one of the top players in the state with 11.9 ppg and 5.9 rpg averages. She leads the state in field goal percentage, shooting .571, and in 3-point shooting with a .535 percentage and 2.56 makes per-game average. Montague and teammate TyLee Manuel, a 6-1 senior, have both signed to play at Montana State-Billings. Manuel averages 11.2 points and 7-9 rebounds. Other Billings West stars include 6-0 juniors Maddie and Willa Albrecht, and 5-10 senior TyRaa Manuel.

Great Falls High (8-14) — Veteran coach Jerry Schmitz brought the Bison along to where they were playing their best in the Eastern AA Divisional. They copped a state berth as the fourth East seed. Team leaders include 5-11 junior Jorgie Hawthorne, 9.6 ppg and 7.9 rpg, and 5-10 senior Erin Watt. Their floor leader is 5-7 senior Hadlee Bleskin while 5-4 sophomore Ryen Palmer is a good defender.

The boys will be crowning a new champion when they tangle at the Civic Center this week. Defending champion C.M. Russell of Great Falls lost out at the Eastern AA Divisional and didn’t advance to state. Missoula Hellgate comes in as the favorite, having won the western AA, listing a 19-1 record and possessing a tall roster chock with college prospects.

Bozeman, Great Falls High and Missoula Sentinel lead the list of other contenders.

Bozeman (16-5) — The Hawks are coached by Wes Holmquist and have good talent, as in 6-5 senior Montana State football signee Ryan Lonergan, 14.5 ppg; 6-6 senior Montana football recruit Ryan Simpson, 13.5 ppg and 7.0 rpg; and 5-10 junior guard Carter Ash. Brett Clark, a 5-11, junior brings more ability to the lineup and 5-8 senior Jashon Mendoza directs the floor. Bozeman won the Eastern AA Divisional title, so comes in as the No. 1 seed from the East.

Great Falls High (17-4) — Veteran Bob Howard has had another fine season at the helm of the Bison. Second-seeded from the East, Great Falls High is led by 6-4 senior Blake Thelen, 14.9 ppg and 6.8 rpg. He is another Montana State football recruit. More scoring comes from 5-11 senior Kyle Torgerson, 6-2 sophomore Drew Wyman and 6-0 senior floor general Keegan Bistodeau. Riley Callery, a 6-3 senior, helps on the boards.

Billings West (14-8) — The Golden Bears won three straight games at the Eastern AA Divisional to gain its third seed. An especially athletic team coached by veteran mentor Kelly Darragh, the Golden Bears are led by 5-9 senior Montana football recruit Jesse Owens, who had a 35-point game in double overtime versus Butte High and averages 17.9 per game, third-best in AA. They also get 15.4 points a game from 5-9 junior Cade Tyson and 9.8 from 6-2 junior Josh Erbacher. The Golden Bears are led on the boards by 6-5 senior Kobe Nelson and 6-2 senior Lucas Gibb, both averaging a little above six rebounds a game.

Billings Skyview (11-10) — The Falcons have good size and athleticism directed by Kevin Morales, another veteran winning coach back in the tournament. They are the fourth seed from the East and top players include 6-7 junior Julius Mims, 11.3 ppg and 6.1 rpg; 6-2 sophomore Cam Ketchum, 11.1 ppg; and 6-10 senior Montana Western basketball recruit Zach Schacht, 9.3 ppg and 6.2 rpg. Abe Seybert, a 5-10 sophomore, is the point guard.

Missoula Hellgate (19-1) — Head coach Jeff Hays’ Hellgate roster is loaded. Third-year starter and Montana Grizzly hoops commit Rollie Worster is only a junior and the 6-3 standout tops the AA with a 20.4 points-per-game scoring average. The leading rebounder in AA is Knights’ 6-8 junior Abe Johnson, averaging 7.9. Other top players are 6-4 senior Bridger Deden, 6-5 senior Dylan Holst and 6-3 senior Fisher Richardson. The Knight lead the AA in offense, 64.9 ppg; defense, allowing 41.8 ppg; and in scoring margin, 23.1 points. They are undefeated against Montana opposition their closest call a 47-46 edging of Capital. Their only loss of the season was 77-71 to Coeur d’Alene (Idaho) High School.

Helena Capital (12-9) — Guy Almquist is another successful head coach bringing a team back to the tournament. The Bruins arrive as a No. 2 seed after their 59-35 loss to Hellgate in the Western AA Divisional final. Capitalizing best for the team are 6-3 junior Trevor Swanson, 11.5 ppg, and 6-5 junior Shane Haller, 5.3 rpg. Consistent contributors also include 6-2 senior Brady Martin, 5-10 junior Bridger Grovom and 6-5 senior Garrett Kueber.

Missoula Sentinel (16-6) — The youngish Spartans wound up as the third seed from the West after recovering from a semifinal-round upset at the hands of Capital at their divisional. Head coach Jay Jagelski has 6-5 senior Scott Malikie leading the way at 10.2 points a game. Alex Germer, a 6-6 sophomore, averages 9.4. Other key players include 6-5 sophomore Tony Frohlich-Fair, 5-10 senior UM football recruit Elias DeWaters and 6-3 sophomore Hayden Kolb.

Helena High (11-11) — The Bengals are the fourth seed from the West and led by 5-10 senior Connor Murgel and 5-11 senior Pierce Brown, both averaging about 11 points a game. Head coach Brandon Day has a bit undersized team that is led on the boards by 6-3 senior Alex Johnson, 4.6 rebounds a game. The Bengals have six players 5-11 or shorter on the roster.