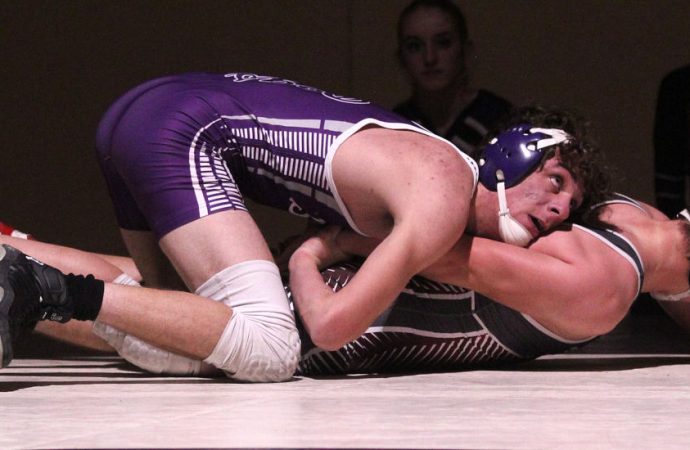 Dominick Scown of Butte High works toward a victory by decision of Kaleb McKay of Helena High in a 170-pound match Tuesday night at the Butte High old gym. (Bill Foley photo)

Butte High wasn’t at full strength for its wrestling dual meet, so the 65-0 shutout it pitched against Helena High was more of the positive wake left from some soul-searching almost a week ago.

Physical matters are always a part of wrestling, so the healing of inner selves realized in the big Western AA Conference victory in the old Butte High gym Tuesday night was of bonus quality.

“Scout (Allen) had to have an ear drained, so he had the night off,” Cory Johnston, head coach of the Bulldogs, said. “We gave Christian Sherman a night off. We had some guys off tonight.”

The Bengals might’ve wished that Johnston would have dug a little deeper into his depth. Butte High benefited from three Helena High forfeits, but punctuated its evening success with five pins, including one by reigning Class AA state 205-pound champion Kameron Moreno, who won the rodeo at 182 in eight seconds.

“At 145, Jerek Rosenleaf is a senior who has been working his butt off in the wrestling room,” Johnston said. “He deserved a chance to wrestle in a varsity dual. Tonight, we were able to give him that shot and he got us a pin.”

Connor Konda of Butte High gets ready to shoot against David Demp of Helena at 138 pounds. (Bill Foley photo)

Dominick Scown of Butte High works toward a victory by decision of Kaleb McKay of Helena High in a 170-pound match Tuesday night at the Butte High old gym. (Bill Foley photo) 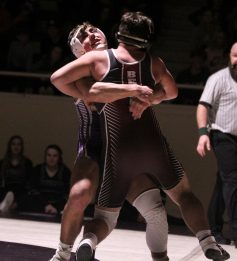 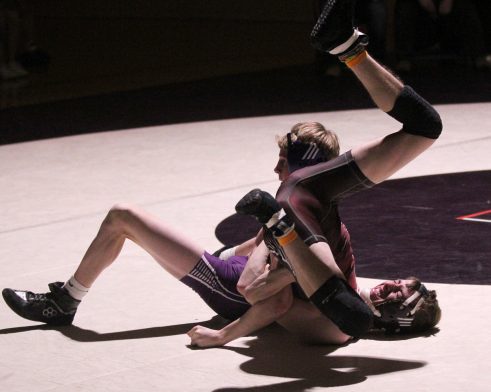 Rosenleaf’s stick was time in 1:39. The Bulldogs’ other pins were by Kyler Raiha at 103 pounds, Trey Whitlock at 113 and a 54-second beauty by Keagan Gransbery at 126.

“Trey wrestled up a weight class for us and against a kid who always gives him fits,” Johnston said. “Trey controlled the match tonight.”

Senior 160-pounder Quinn Sullivan said the Bulldogs have just stepped up to the responsibility of varsity wrestling. They lost at Helena Capital in a dual meet they expected to win last Thursday, then bounced back on Friday with a come-from-behind win over Missoula Big Sky.

Kobe Moreno said at the time that the team had a meeting after the Capital bouts and refocused.

“The team has been working on a lot of stuff in practice,” Sullivan said after his 13-5 major decision win at 160 pounds. “We had a tough loss last Thursday and we learned this when the ball starts to get rolling. We have some really good leadership on this team. We’re starting to hold each other accountable more and hold to higher standards.”

A fear at Christmas-time was that Sullivan’s wrestling career was over. A knee injury, suffered in football and then aggravated on the mats, looked like it might put him on the sidelines.

“This is my second week back and I’m working on getting back into shape again,” the polite, quiet-spoken athlete said. “I’,m trying to get the strength back up and it is starting to get better.”

Dominick Scown also had a major decision, at 170, pounds. Regular decisions were won by Bulldogs Kip Pumnea at 120 pounds, Gavin Vetter at 132 and Connor Konda at 138.

The winners on forfeits were Dylan Averyt at 152 pounds, Myles McClernan at 205 and Kobe Moreno in the 285-pound limit class.

“You can do better than this — zero losses,” Johnston said. “Our depth is something we take a lot of pride in.”

Johnston agreed that, though, the beating was pretty resounding that Butte High put on the Bengals, some bouts were closely contested and the Bulldogs pulled them out for wins. He appreciated the competition put forth by Helena High in those.

“We’ve wrestled Helena three times (Butte High won all three) this year,” the coach said, “and, we always tell the kids that if you get a kid from Helena High, you need to wrestle really hard.”

Butte High will compete in the Jug Beck/Rocky Mountain Classic tournament in Missoula this weekend.