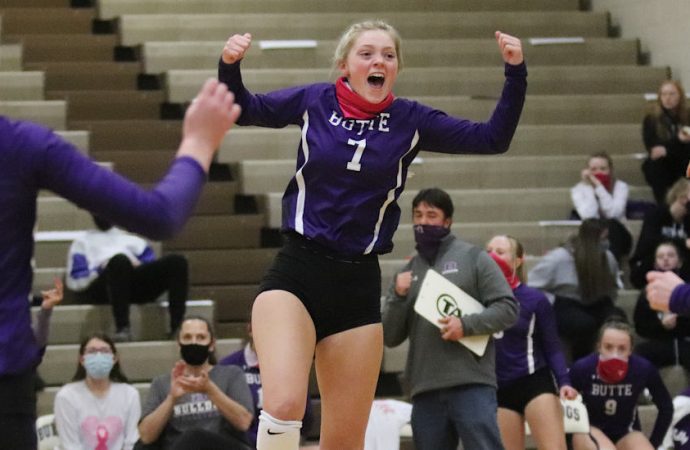 Butte High acted like it was Senior Night, anyway.

The Bulldogs were originally slated to honor their senior volleyball players Saturday in a home match against Flathead High of Kalispell. However, because of the havoc the ongoing pandemic has been raising with schedules this fall, Butte High authorities opted to hold the night of honor earlier this year, fearing this weekend’s matches might get  canceled because of the coronavirus spread.

Still, Hannah Morin-Ferguson, MacKenzie Tutty and Kelly White, Butte High’s three seniors, celebrated with a 26-24, 25-22, 25-18 sweep of Flathead in the Ross J. Richardson Momorial Gym. It was the Bulldogs’ last home match, at least in the regular season, and gave them a season sweep of the Bravettes.

The victory came on the heels of a Friday loss to Kalispell Glacier. The fun, it seems, had been missing recently and the Butte High girls eventually decided to reinstall it.

“It wasn’t me, this had everything to do with the girls,” Butte High head coach Shane Jorgensen said of the win. “They’re an amazing group of kids.

“After last night, we had about a 20-minute meeting to talk about what we needed to do. They came out and decided they wanted to be excited. Tonight was the first time in a couple of weeks that when their backs were against the wall they continued to play with intensity and didn’t get down on themselves.”

The Bulldogs won from both ends of the match climate – showing some domination at times, and also rallying back from behind. They will play at Missoula Sentinel and Missoula Hellgate Tuesday and Thursday and Jorgensen said he is hoping two wins, if the Butte girls can get them, on the road to close out the regular season might also bring a home match in the play-in round of this year’s state tournament.

“I still think there’s a chance we can host,” Jorgensen said. “It would be tough not coming back into this gym for the girls to play another game this year.”

Saturday’s game started about 2 ½ hours late because of bad, snowy and icy roads that slowed bus travel for the Bravettes from Kalispell. It was worth the wait for Butte High.

“We put a lot of stuff ogver the net and were hitting it hard,” Jorgensen said. “It was different from the last couple of matches we’d had. This was supposed to be our Senior Night and it was nice to see our seniors come out and finish their (regular season) careers here playing well in this gym. Everybody played well.”

It was almost shot-for-shot and point-for-point in the first game with neither side able to open more than a four-point lead, which was in the early stages. Flathead had a 7-3 advantage after a Bulldog hitting error. Soon, the game was knotted 7-all on double-hit call against the Bravettes and it was close the rest of the set.  Butte High hit set point at 24-22 on a kill by Brooke McGrath set by Morin-Ferguson. However, a Butte serving error and a kill by Flathead’s Alliyah Stevens tied the score. Tutty thumped a kill to regain the Bulldog lead. Then, Flathead pasted a shot over the end line and Butte High had won the first game in extra serves.

Jorgensen used a lot of players in the match and much of the subbing occurred in the second set and third sets. The Bulldogs led all through the second after a 2-all tie was fractured by a Flathead hitting error. Katie Keller helped serve Butte High to an 8-3 advantage, helped by a pair of McGrath kills. The Bulldogs maintained the margin and got to set point at 24-18 on a tip by Mollee Conlan. However, the Bravettes surged back as Savanna Sterck killed two shots and Madelyn Moy fired an ace in a rally that tightened the difference to 24-22. Butte High setter Olivia Quinn then teed up a shot that McGrath killed to end the game.

Butte High pulled away from a fatigued Flathead unit in the third set to complete the sweep. The Bravettes led early, though. They were up by 16-14, then sent a serve into the net. Tutty took over serve and reeled off eight straight points that sent the Bulldogs out ahead by 23-16. Kennadie McMahon scored on a kill and on a tip, and McGrath mashed two more kills to spur the surge.

Quinn set a shot for McMahon, who executed the kill for set point at 24-17. Moy tallied on a block for Flathead before the match ended on a block by Butte High junior Ashley Olson.

McGrath wound up with nine kills and McMahon had eight to lead the Butte High offense. Olson had three blocks. Quinn set 18 assists and Katie Keller set 12. Tutty led in digs with 13 and McGrath came up with 10.