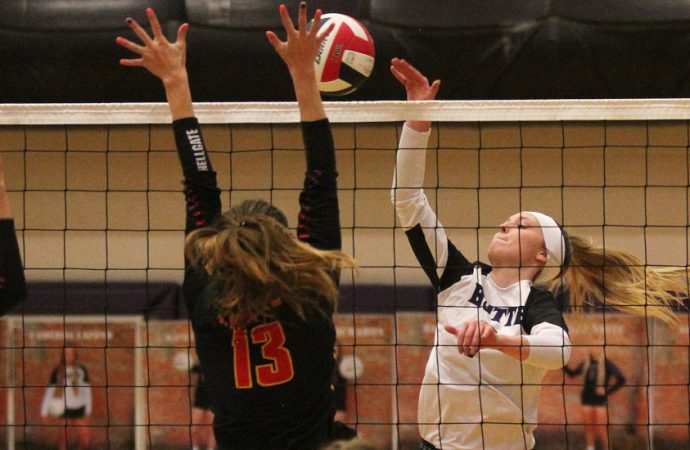 The Bulldogs clicked. If the 25-13, 25-15, 25-16 sweep over Missoula Hellgate wasn’t their best-played match of the year, it might be close to it. They beat the Knights both ways, dominating early and, in later sets, fighting past them.

“It was a team effort — team, team, team,” she said, emphasizing. “We’re really driving home the team (concept). It’s not about individual stats and kills leaders and that. We’re playing one win at a time, one opponent at a time, game at a time.”

“They’ve been worried about their stats. But, tonight, I’m proud of their effort, that they’re collectively celebrating each other over themselves.”

So, it was a Western AA Conference win accomplished by Butte High in its own Ross J. Richardson Memorial Gym, and worth the celebration.

The lead was steadily expanded and reached 10 points at 13-3 when Hellgate was called for a double-hit. Sydney Doyle served a five-point run for the Bulldogs in the meantime. A kill by Ally Mueller and an ace by Doyle widened the gap to 11 points, 23-12. After Lydia Barrow hit a kill for Hellgate, Butte High closed the set with a Mollee Conlan kill and a MacKenzie Tutty serve that caught the top of the net and dropped over to the Knights’ side for an ace before any Hellgate players could react.

The Knights stayed with the Bulldogs for awhile in the second set. They led twice and were in a tie with Butte High five times before the Bulldogs went ahead for good on a Hellgate hitting error. It came during a Doyle four-point serving run.

It took a little longer for Butte High to pull away comfortably, but the Bulldogs did reach the 10-point difference mark at 24-14, set point, when Tutty tapped down a tip. The Knights staved off set point three serves before Butte High ended the game with Doyle setting a kill for Mueller.

“Our energy was really good tonight, even when we were ahead by a lot,” Hope said. “We kept our energy high.”

Butte High threatened to break away from Hellgate early in the third set, but was caught at 5-5 all when the Knights’ Gillian Sherrill nailed a kill. Hellgate never got the lead, but did force six ties before Brooke McGrath belted a kill for a 12-11 Bulldog edge and the lead for good. Grace McGrath soon served a seven-point run that lengthened the Butte High advantage to 19-11. She smashed one ace in the run, Field pounded two kills and Kennadie McMahon also hammered a kill. Hellgate errors accounted for three points.

A stuff by Tutty later put the score at 24-13, match point. Hellgate refused to yield through three serves, but a block by Conlan brought about the end.

Sherrill, a 6-1 junior, led Hellgate with eight kills and two blocks. Barrow had 11 assists, and Kaylee Rammell came up with 17 digs to lead the Knights’ floor defense. Hellgate is now 1-13 for the season, including an 0-11 Western AA Conference mark.

Butte High is 7-8 for the season, 3-7 in league play after its second sweep of the year of Hellgate. The Bulldogs will play a non-conference match at Class A Dillon on Thursday night.

“We look forward to playing Dillon on Thursday, but we’re focusing on practice tomorrow,” Hope said. “I don’t care about the future. I care about today.”