Bulldogs run record to 4-0 with rout of Wolfpack 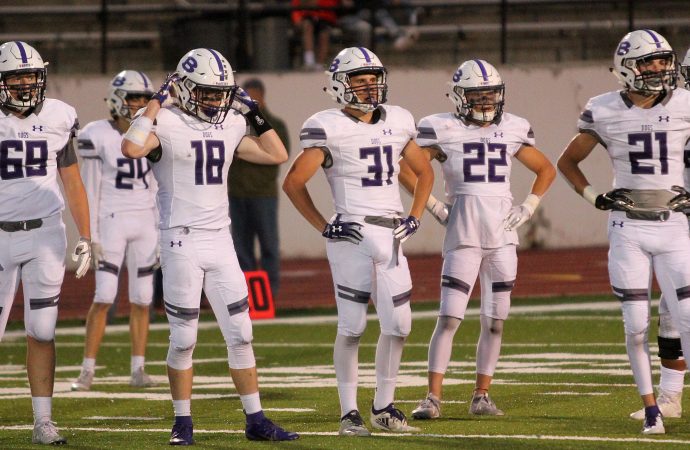 KALISPELL — The Boys From Butte are off to their best start in 13 years.

Senior quarterback Tommy Mellott had a hand in five touchdowns Friday, and Butte High rolled to a 55-28 win over Kalispell Glacier at Legends Stadium. (Stats)

“I’m proud of the boys and the coaches,” Butte High coach Arie Grey said. “We came ready to roll.”

Mellott used four different receivers for scores, passing for 298 yards. He hit Ryan Neil for a score of 70 yards, Banner Cetraro for 65, Quinn Sullivan for 50 and Peyton Hettick for 33.

Mellott also ran for 126 yards and a touchdown to lead the Bulldog offense that put up more than 400 of its 590 yards of offense while building a 41-13 halftime lead.

“His focus level this week was unbelievable,” Grey said of Mellott, who has committed to play at Montana State. “He played so hard, and everybody played hard. Every guy that was out there on that field brought something to the game. That’s what I’m proud of. Every single person had a major role in what we did.”

Behind the offensive line made up of Konor McClafferty, D.J. Jackson, Ty Raiha, Timothy Hollingsworth and Lucas Kingston, Kameron Moreno ran for 92 yards and a pair of touchdowns. His twin brother Kobe also punched in a score.

J.T. Allen passed for 146 yards and three touchdowns to lead the Wolfpack, who fell to 1-3 overall and 0-2 in league play.

The Bulldogs wasted little time getting started. On the third play from scrimmage, Mellott hit Sullivan on a short screen pass. The speedy Sullivan did the rest, racing 50 yards for the score.

The point after by Casey Kautzman was blocked, one of two blocked PATs the Bulldogs allowed in the win.

Allen and the Wolfpack quickly responded when the quarterback hit Deck for a 33-yard strike. Glacier went for a 2-point conversion, and the Bulldogs stuffed it, leaving the score at 6-all.

Then, Mellott hit Neil for the 70-yard score to give the Bulldogs the lead for good at 13-6. Mellott added the strike to Hettick for a 20-6 advantage late in the first quarter.

A 13-yard Mellott touchdown run made it 26-6 early in the second quarter.

Renidina scored on a 3-yard run before Kameron Moreno found pay dirt for the first time, this time from 2-yards out.

Mellott’s 65-yard strike to Cetraro was a back-breaker with time running low in the first half.

The Bulldogs forced a fumble on the opening kickoff of the second half, and Cetraro recovered, giving Butte Hight he ball at the 17-yard line. Four plays later, Kameron Moreno punched in a TD from 1 yard out.

“That was huge,” Grey said. “We got a turnover and then we punched one in.”

Cetraro and Hettick each caught three passes in the win, while Sullivan and Cory West each grabbed two. West also racked up 91 yards in kickoff returns.

Sullivan intercepted a pass in the win.

Grey pointed to the play of safety Scout Allen and cornerbacks Billy Kelly and Rylan Richards as standouts on defense. He also mentioned the defensive lineman. Butte High rotated seven or eight players on the line throughout the night.

The Bulldog coach pointed out the difficulty for the defense being on the field so long because of Butte High’s quick-strike offense.

“We got to the ball defensively,” Grey said. “We played fast and physical. Our defense is playing really well. They’re out there a lot. They play hard, they play fast and they play physical.

“They played well tonight against a very dynamic offense.”

Butte High will look to make it 5-0 next Thursday when they travel to Missoula for a showdown with 4-0 Missoula Sentinel.