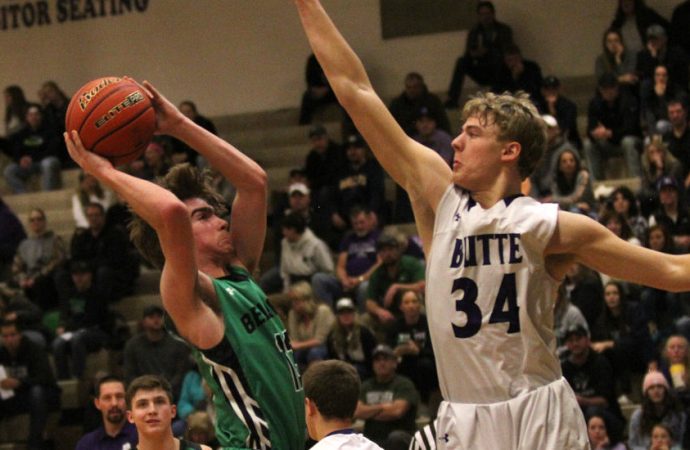 Still, Bulldog fans cannot help but gush over junior Jake Olson. The 6-foot-8 post player appears to be on the verge of a bigtime breakout season for the Bulldogs.

Olson had another huge game Thursday. This time he poured in 16 points to lead the Bulldogs to a 66-40 win over Belgrade at the Richardson Gym.

That comes after Olson, who registered his second double-double in as many games, poured in 25 points for the Bulldogs Tuesday against Dillon.

“I feel like I’m more of a key player, and I have more of a role,” said Olson, who also shut down Belgrade’s inside play with his defense. “We try to get it inside a lot and be more aggressive, which means attacking the basket. Luckily, that opens up stuff for me.” 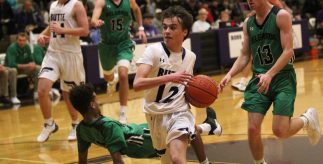 Butte’s Billy Kelly drives to the hoop as TaVeus Randle gets called for a blocking foul. (Bill Foley photo) 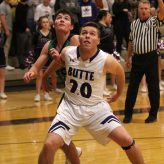 Olson contributed for the Bulldog varsity unit as a freshman and sophomore. So far this year, he’s playing at a much higher level.

“He’s a phenomenal athlete,” Butte High first-year coach Matt Luedtke said. “He’s long, he uses his body, and he’s just smart. He’s really playing with a lot of freedom in there and being aggressive, and that’s what we’re asking him to do. He’s got to be one of the best players in the state.”

Olson’s play opened things up for the rest of the Bulldogs, and the team knocked down nine shots from 3-point land.

Butte High did not trail in the game that started with the Bulldogs on the free throw line.

Belgrade was whistled for a technical foul for a pregame dunk, and Kelly hit one of two free throws.

Then, Drakos sank a three off a pass from Booth to put the Bulldogs up 4-0 before the Panthers ever touched the ball.

Butte High scored the first seven points and 12 of the first 14.

With 12 players seeing action, Butte High put the game way with an 18-3 run in the third quarter.

“We’re working hard with each other,” Olson said. “We’re going at it in practice, and it goes into the games. We are physical and aggressive.

“All of our guys are shooters, I’d say,” Olson said. “They can all handle the ball and drive to the basket.”

Luedtke said that offense runs through Olson, whose father, Bob, played hoops for Butte High and the University of Montana.

“The guys came out and shot the ball well early,” the coach said. “We’re trying to get some inside-out stuff going. Obviously, we want to emphasize getting the ball to Jake. If we can get it to him and teams have to adjust, then our other guys are going to be open. We’ve got a lot of guys who can knock it down from the perimeter.”

Kelly runs the Bulldog offense that has scored 141 points in its first two games. The Bulldogs fell 78-75 in overtime in Tuesday’s season opener in Dillon.

“Billy is so smooth, aggressive and smart,” Luedtke said. “He’s the whole package at point guard. We’re pretty lucky to have him.”

Cooper VanLuchene and Noel Reynolds each scored eight points to lead the Panthers, who played for the first time this season. Wyatt Russell scored seven for Belgrade, which also got six from Sage Smart and Ta’Veus Randle, four from Austin Spangler and one from Coby Richards.

“We’re still working hard to be better defensively,” Luedtke said. “We had a lot better rotation tonight than we did on Tuesday.”

The Panthers will be back in town Friday to take on Butte Central at the Maroon Activities Center.

Butte High is off until they head to Great Falls to play the Bison next Friday.

“I’m proud of the kids,” Luedtke said. “I’m looking forward to watching the film with them Monday and checking out and seeing what happened.”