Bulldogs run away from Rustlers in Great Falls 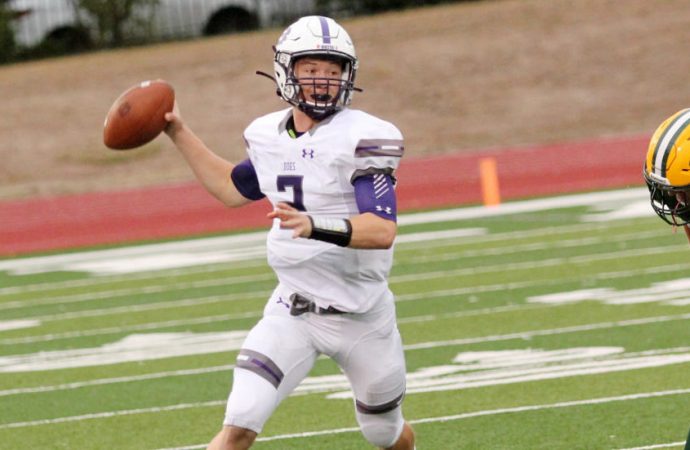 Also, nobody has a better way of describing watching the senior quarterback speed past the defense.

“He hits the boosty boost right after he passes us,” McClafferty said on the rain-soaked turf at Memorial Stadium following No. 4 Butte High’s 52-21 victory over Great Falls Russell Friday night. “It’s great just watching him fly. Nobody is catching up to him, and it’s like, ‘There you go, buddy.’” (Scoring summary; Stats)

That “boosty boost” was on full display as Mellott led the Bulldogs on what just might be the best offensive performance in the history of Butte High football.

The future Montana State Bobcat had a hand in six touchdowns — three running and three passing — as Butte High scored on eight of nine offensive possessions of the night.

As crazy as it might sound, Butte High’s most impressive possession was the only one that did not result in points.

The Bulldogs ran off the final 10 minutes, 54 seconds of the game with a long drive that ended with Butte High electing to take a knee to end the game.

“The last one was the best one by far,” Butte High coach Arie Grey said. “We feel comfortable with our offensive line and our running backs, and they took over. We’ve got to be able to do that. We’ve got to put big drives together, and kudos to those guys for being able to do it.”

He threw a pair of touchdown passes to Banner Cetraro and one to Cory West. 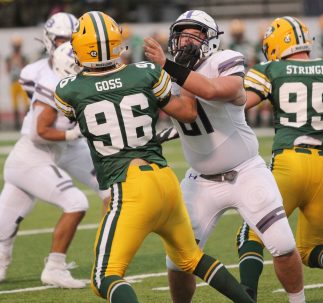 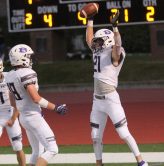 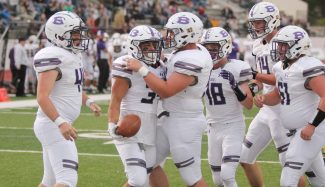 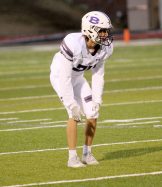 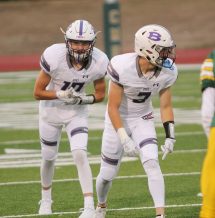 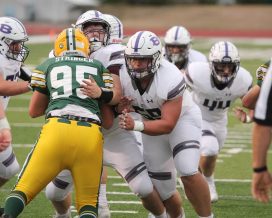 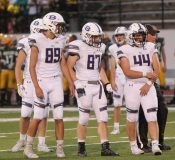 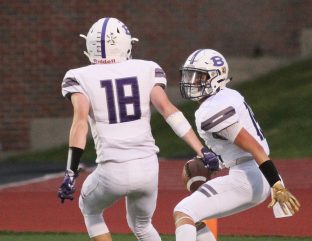 McClafferty said playing in front of Mellott and company is fun.

Butte High’s “tough guys” took control of the game from the start.

The Bulldogs received the opening kickoff and marched 74 yards on 10 plays. Kameron Moreno capped the drive by busting through for a 3-yard run.

Mellott scrambled for a run of 6-yards to make it 14-0 on Butte’s second possession.

After CMR’s Bryce Nelson hit Wyatt Hagen for a 72-yard score, Mellott hit West for a 37-yard strike to make it 21-7 late in the first.

That scoring play came on fourth down and seven.

Mellott hit the boosters for a 60-yard run to make it 28-0 early in the second quarter.

Nelson got the Rustlers on the board again with an 8-yard pass to cut the lead to 28-14 before Mellott hit Cetraro for a 10-yard score.

Butte High took a 38-14 lead into halftime after a two-minute drill set up a 43-yard field goal by Casey Kautzman as time expired.

The kick would have been good from at least 50 yards by Kautzman, who was also perfect on extra points.

“I’m really happy with our 2-minute drill at the end of the half,” Grey said.

The Bulldogs added two more touchdowns in the third quarter. Mellott scored on a 1-yard run before hitting Cetraro for 32 yards. (Note: the stats credit another Bulldog receiver with the score.)

In between, CMR’s Logan Richard scored on a 1-yard run.

While the Bulldogs defense was far from perfect, Grey said his defense made plays when it had to.

“We gave up a couple of plays here and there, but really I thought the defense had some good stops,” he said.

Tanner Huff picked off a pass in the end zone for the Bulldogs lone takeaway on the night. Aidan Lee, Tucker LeProwse, Quinn Sullivan, Scout Allen and Dylan Averyt also stood out defensively for the Bulldogs.

Years from now, however, it will be Butte High’s offensive performance that will be remembered from this night.

McClafferty cautioned that his team cannot take too much from Butte High’s second lopsided win to start the season.

“It was a good night,” Grey said. “This is just our two weeks of finding out where we’re at and what we’ve got to do. Now we get into the big games.”