Bulldogs pull out OT win, will play for NAIA title 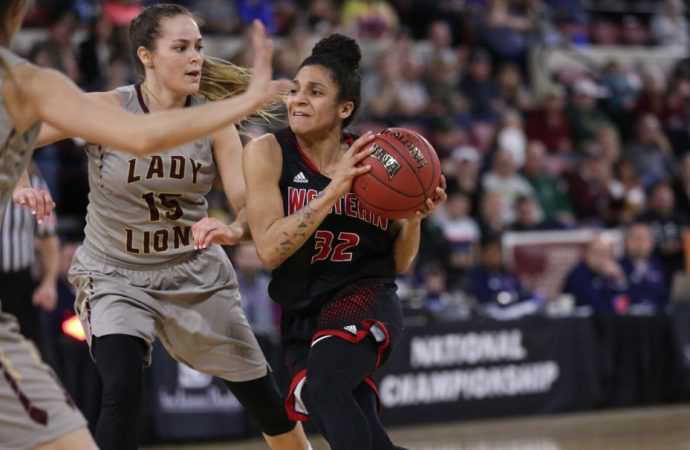 Montana Western will play for the NAIA national championship Tuesday night at the MetraPark Arena.

The comes after the Bulldogs knocked off defending champion Freed-Hardeman (Tennessee) in a 78-71 overtime thriller in Monday night’s semifinals of the 39th annual NAIA Division I Women’s Basketball National Championships. (Stats)

Western is moving on thanks to a monumental game by Brianna King. The senior guard scored 39 points in the win. That includes an improbable 3-pointer at the buzzer to send the game into overtime tied at 66.

The game-tying shot, which might go down as the biggest shot in school history, came after Carrie Hatchel sank a pair of free throws to put Freed-Hardman up 66-63 with 2 seconds left.

Western called time out, and by rule the ball was advanced past half court, setting up King’s miracle.

Cierra Lamey turned a three-point play with a bucket and a foul to open overtime, and the Bulldogs never trailed in the extra frame. Western outscored Freed-Hardeman 12-5 in overtime.

King shot 13 for 32 from the field to come within one point of her own school record.

The 39 points gives King 734 on the season, breaking Bobbi Suhr’s school record of 709.

King, who grabbed seven rebounds, also hit 5 of 10 shots from 3-point land and shot 8 for 9 from the free throw line.

She outdueled Freed-Hardeman star Haylee Croom, who scored 32 points to go along with 13 rebounds.

Lamey, a Wise River native, scored 14 points and pulled down 12 rebounds in the win. Britt Cooper scored nine points for Western, which got five points from Tori Anderson, four from Paige Holmes and Shannon Worster, two from Mesa King, and one from Savanna Bignell.

Brandy Bookout and Darby Schey also contributed in the win.