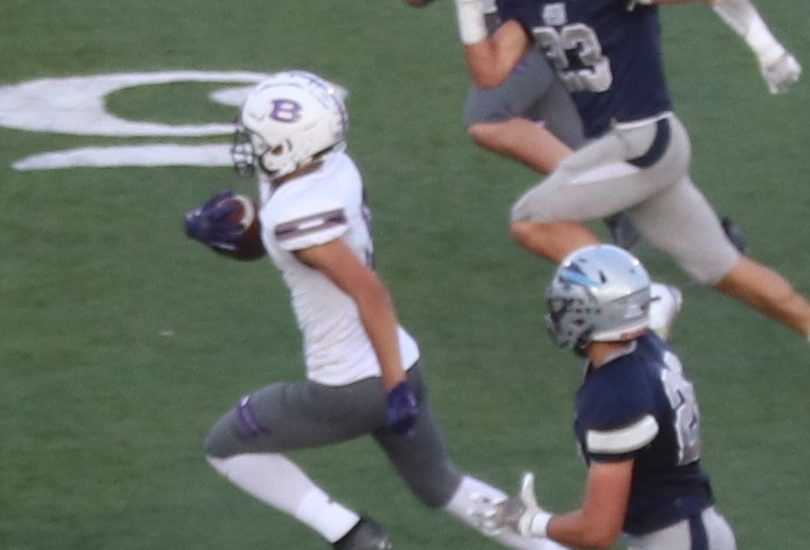 Labor Day weekend the Butte High Bulldogs made their first road trip of the early football season to Great Falls for a clash with the Great Falls Bison.  Fast forward to the final weekend of October and the Bulldogs will be traveling back to Great Falls for the first round of the Class AA playoffs.

Bulldog fans are hoping this trip finishes as good as the last trip started.  The Bulldogs jumped out to an early 10-0 lead and looked to be headed to their second win of the season.  Those dreams were dashed quickly by Bison stars Reed Harris and Raef Longin.

Longin ended the game with four touchdowns and 97 yards rushing and an 80-yard kick return for a score.  Harris made five catches for 149 yards and a touchdown plus an 88-yard touchdown run to start the fourth quarter.  The Bison tallied 326 yards of offense with 111 yards rushing and 183 yards passing for a 41-17 win.

The Bulldogs scored all 17 of their points in the first half with a Tyler Duffy field goal, a 1-yard touchdown plunge by Trey Hansen and Rueso Batterman taking a screen pass from Jace Stenson 70-yards for a 17-7 lead.

Bulldog fans want to put all of those memories behind them as the second season gets underway this Friday with the AA playoffs.  All teams start with a 0-0 record and a chance to claim the State AA title.

I have had the opportunity to watch the Bulldogs in their last two road trips and this Dog team has proven that they can play with anybody, if they don’t hurt themselves.  Take away a bad third quarter in Kalispell and four fourth downs in Missoula and the Bulldogs would also be 6-3, just like the Bison.

Coach Arie Grey pointed out the key to the Bulldogs game in Great Falls this Friday.  “Consistency is the key to our game.  We have to trust ourselves, our teammates and our system when adversity happens.”

The Bulldogs will also have to neutralize the two headed monster the Bison have unleashed on opponents this season.

Boston College bound Reed Harris has made his bid for AA player of the year using his athleticism to rush 39 times for 307 yards and 2 scores, 34 receptions for 539 yards and 3 more TD’s, averaging 111-yards per game on offense.  He also has 39 tackles from his linebacker position with 6 sacks and 8 tackles for loss.

Longin has rushed for 696 yards and 7 scores and has caught another score.  He is averaging over 147 yards per game in total offense.  He is also averaging 37 yards per kick return.

Grey also feels Special teams play will play a factor once again, “They use good schemes on special teams that allow their blockers to open holes for kick returners.  We need to have good ball placement and play disciplined to stop big returns.”

Butte Highs offense has put up impressive numbers this season with Senior quarterback Jace Stenson passing for 2,355 yards on 168 completions in 292 attempts, 21 of those completions have been for touchdowns with 9 being to the other team.  Stenson has also rushed 124 times for 563 yards a 6 more scores.

Stenson’s favorite target has been fellow senior Cameron Gurnsey who has grabbed 43 passes for 668 yards and 4 touchdowns.  Freshmen Hudson Luedtke has snared 33 passes for 456 yards and leads the team in touchdown receptions with 6.  Fellow Freshmen Cade Stajcar has 26 catches, Junior Rueso Battermann has 25 and Sean Ossello has made his presence known with 19 grabs and 4 touchdowns.

Grey feels it will be very important for the Bulldogs to run the ball Friday night, “They are going to make you make mistakes.  They won’t get beat over the top by long passes.  We will have to have a running game to open up our passing game.”

The running game will rely on the Offensive line controlling the line of scrimmage.  The front men are led by Seniors Zach Tierney, Wyatt Mulaney, Junior Kade Schleeman, and Sophmores Brett Polich, Matt Donaldson and Jake Hennelly. Stenson and Trey Hansen, who has carried 107 times for 340 yards and 9 scores, will be looking for opportunities created by the front line.

The Bulldog defense has been bolstered by the return of lock down corners Kale McDonald and Taylor Parks from injuries.  Along with free safeties Ethan Cunningham and Luke Verlanic the secondary will be busy defending the Bison passing game led by quarterback Ashton Platt.

Cousins Quinn Cox and Kyler Stenson anchor the ends for the Bulldogs and will be counted on to keep pressure on Platt while containing the running game.  Tierney, Mullaney, Schleeman and Tyler Galle will be busy corralling Longin.  The Bulldog linebackers Isaac Kohler, Luke Garrison, Aiden Cuchine and Kip Pumnea will have their heads on a swivel with Great Falls run game and play action passing game.

“We have nothing to lose in this game so our boys are going to play with their hair on fire, all week at practice we talked about having fun and playing loose.” Grey lamented, “I want to keep coaching these guys.  This is a special group of young men who have made us better coaches.  They will go far I life and be successful in whatever they do.  We don’t want this to end.”