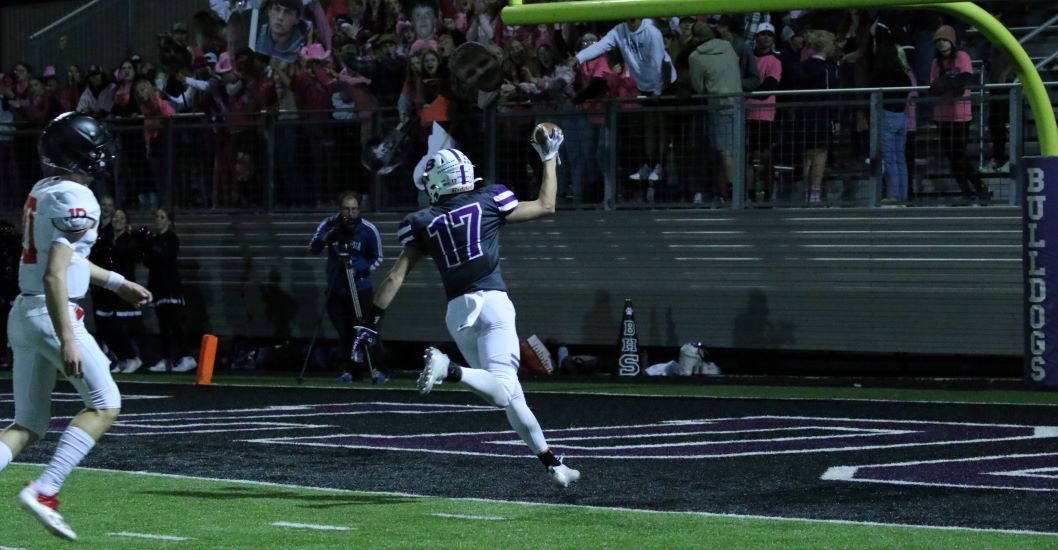 The breaks went Butte High’s way Friday night. They haven’t always or even much this high school football season for the Bulldogs.

However, at Naranche Stadium while the team was celebrating Senior Parents Night, Butte High scored on the run, on the pass, on defense and on a “Fridge” play and walloped Missoula Hellgate 55-0 in a Western AA Conference game in front of a large crowd.

The Bulldogs scored on two turnovers while forcing four. Kale McDonald took a pass interception back 25 yards for one TD, and quarterback Jace Stenson went 13 yards with a fumble on a three-possession play that was more frizzle-frazzle than it was razzle-dazzle. The teams played entertaining football.

“We got a chance tonight to celebrate our seniors,” smiling head coach Arie Grey said afterward while fans and players whooped and cheered on the Naranche Stadium turf. “It was nice to see breaks go our way. I think that when we play fast, we create our own breaks. That fast start coming out was critical.”

Butte High had a 21-0 first-quarter lead before the turnstiles – if the stadium gates had any – would’ve quit spinning. The Bulldogs scored on the run — a 34-yard keeper by Stenson — the pass — a 47-yard play to tight end Hudson Luedtke from Stenson – and on defense – McDonald’s 25-yard pick-six.

They tacked on three more TDs in the second quarter for a 42-0 lead at halftime. Sophomore running back Karson Pumnea carried for an 11-yard scoring romp, Stenson tallied on the crazy pass-interception-fumble recovery play and Cameron Gurnsey caught a pass for a 60-yard touchdown play.

The crazy play was Stenson’s second touchdown. It was a double-pass design with Stenson throwing to Sean Ossello near the north sideline. Ossello then launched a pass downfield for Luedtke, but Parker Link intercepted for the Knights at the Hellgate 7-yard line. Link ran it back to the 13 where he was jolted by Gurnsey and the ball popped loose. Stenson scooped up the loose ball and raced to the end zone.

A stifling Butte High defense kept Hellgate from challenging much while the Bulldog offense put up two third-quarter touchdowns before the clock ran steadily in the fourth quarter on the 35-point difference rule.

Stenson completed a 28-yard touchdown pass to Ossello and 6 -foot-3, 270-pound two-way tackle Zach Tierney finished the scoring with a 10-yard rumble when called upon to line up at fullback for a play reminiscent of the Chicago Bears’ “Refrigerator” Perry ploy in the 1980s.

For those unknowing, William “Refrigerator” or “Fridge” Perry was a huge defensive tackle brought in by the Bears’ offense for short-yardage plays, usually as a ball-carrier, but sometimes as an extra blocker. 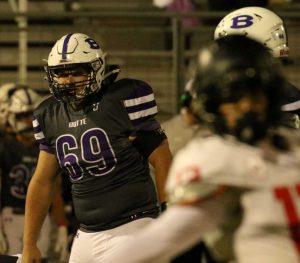 The order to comply similarly was music to Tierney’s ears.

“I’ve been waiting for that all four years,” he said with a wide smile. “We ran it once on Wednesday (in practice). When they said (Friday night) ‘Tierney, get in at fullback,’ I was loving it.”

Tierney took the handoff, stepped through a crack widened some on the defensive side at the line of scrimmage and then charged over and past the opposition into the end zone, where he bounced on his toes while holding the ball over his head in celebration.

“The line blocked great on it,” Tierney said. “Hopefully, we block for our running backs like that.”

Kyler Stenson and Wyatt Mullaney also recovered Hellgate fumbles in aiding the defense to stop the Knights. The Knights netted only 38 yards on the ground and standout quarterback Connor Dick was held to one yard net rushing and 65 passing.

“I’m really proud of how we handled adversity,” Grey said. “We had a little lull there where we couldn’t get things going and the defense picked us up. The defense played with a lot of energy. We told them to play tonight like their hair’s on fire and they did.

“I’ll be anxious to see how many negative plays we made. We didn’t give up big plays, which is a credit to our linebackers and secondary. And, for us, we kind of scored every way possible.”

The Knights were caught behind the line of scrimmage nine times for losses.

Hellgate’s deepest penetration into Butte High territory was to the Bulldog 4-yard line after Jacob Finch recovered a Bulldog fumble at the Butte High 18 in the second quarter. Dick’s pass to Asher Topp moved the Knights to the Bulldog 5 and Dick got another yard on a sneak. After another incompletion, a fumble in the snap exchange on third down was covered by Mullaney, ending the Hellgate threat.

McDonald topped the Butte High tackle chart with 10 stops, and Aiden Cuchine and Garrison were next with six each. Stenson passed for 167 yards and ran for 42. Karson Pumnea rushed for 44 yards. Receivers enjoyed a big night as Ossello caught three balls for 73 yards, Gurnsey had three catches for 69 yards and Luedtke snared two for 64 to lead the pack.

Calija LaRance was Hellgate’s tackles leader with nine, seven of them solo.

Butte High celebrated its seniors with the tremendous showing, but Tierney said the Bulldogs shared the spotlight with some other good people and reminisced a second about the blink of an eye that has timed his prep football career.

“This night means a lot” he said. “Our parents do an amazing job for us.

“It seems like yesterday we were running out of the Bulldog (inflatable tunnel) for the (2019) state championship game. And, now (waving his arm) …”

Butte High went to 4-4 overall and 3-3 in conference with the win. The Bulldogs will close out the regular season next Friday on the road against Missoula Sentinel. Hellgate fell to 2-6 and 1-5.